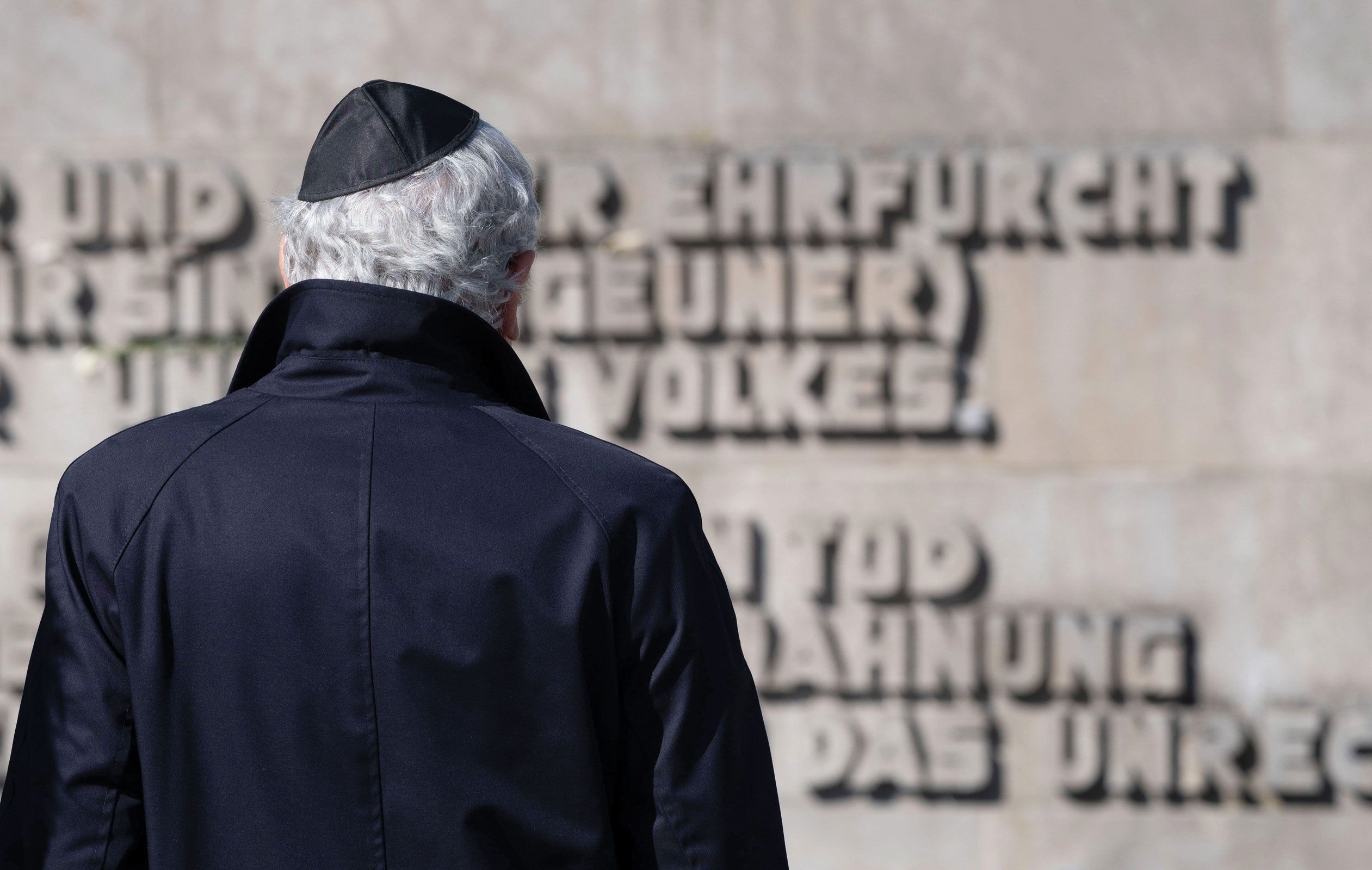 Bergen-Belsen, during a ceremony in April commemorating the 75th anniversary of the camp’s liberation Peter Steffen/DPA/Alamy Live News

Swastikas daubed on memorial plaques, bricks thrown through windows, even a bag of explosives discovered this year at a former concentration camp: the list of attacks on sites in Germany that commemorate the victims of Nazism is growing alarmingly long.

In the 75th anniversary year of the liberation of the camps, it is not just the physical damage that presents the people who manage such sites with a disturbing challenge. The threat can be much more subtle: increasingly, right-wing visitors challenge guides’ portrayal of history or mock the victims, putting the staff on the frontlines of the culture wars.

In one case, two neo-Nazis were photographed making Heil Hitler salutes in the execution room at Buchenwald in 2016. In another, during a tour of the Sachsenhausen memorial site near Berlin in 2018, a member of a group of supporters of the anti-immigration, right-wing Alternativ für Deutschland (AfD) party questioned the existence of gas chambers there. And at Bergen-Belsen last year, a prominent extreme-right video- blogger recorded himself heckling a group of schoolchildren, mocking Anne Frank and saying they were being indoctrinated by “the guilt cult”. Frank was one of about 52,000 prisoners who perished at Bergen-Belsen.

In just one week last winter, Jens-Christian Wagner, the director of Bergen-Belsen, reported four separate offences to the police, he says. About once a month, he finds a right-wing comment in the visitor’s book that contravenes the German constitution. While vandalism at memorial sites is nothing new, these provocations from “groups of normal-looking people” are a recent phenomenon, Wagner says.

Since it was founded seven years ago, the AfD has emerged as a formidable political force, becoming the third- biggest party in Germany’s 2017 parliamentary elections. One of the party’s main goals is to achieve what Björn Höcke, a leading AfD figure, has called a “180-degree turn in our political culture of remembrance”. Höcke has described the Berlin Holocaust Memorial as a “monument of shame”.

Alexander Gauland, one of the party’s founders, has called for more focus “on the positive aspects of German history” and denigrated the “German culture of guilt”. He dismissed the Nazi era as “a speck of bird shit in more than 1,000 years of successful German history”.

The AfD’s focus on changing the nation’s historical narrative by sidelining the Third Reich and the Holocaust coincides with the disappearance of the last generation of first-hand witnesses—a factor in the increasing distance young people feel from the crimes of the Nazis.

“We have experienced an enormous increase in demand for our services since autumn 2017,” says Michael Sulies of Berlin’s Mobile Counselling Team Against Right-Wing Extremism, which advises staff at Holocaust memorial sites and conducts training. “We see a very clear link to the rise of the AfD. It’s the main player in the culture wars and the leading voice of right-wing populism and extremism. It breaks taboos and encourages others to follow.”

Sulies’s organisation has issued guidelines for memorial sites ranging from how to formulate and display house rules, to which offences to report to the police. For employees, “the most important thing is to be prepared”, he says.

Preparation can include denying certain groups access. The management of the Buchenwald and Mittelbau-Dora sites last year ruled that AfD representatives are not permitted to take part in commemorative events at the memorial sites “unless they credibly distance themselves from the anti-democratic, revisionist positions in their party”.

For guides, preparation also requires being alert to what Wagner calls “leading questions” that suggest someone is aiming to provoke. Guides are typically confronted with, for example, assertions that mass deaths at Bergen-Belsen were not a result of Nazi policy to starve inmates but rather a consequence of general food shortages caused by Allied bombing.

The Berlin Mobile Counselling Team recommends employing two tour guides for any group that could prove difficult so one can document unwelcome incidents. Staff also need to become fashion experts. Wagner says that if a visitor arrives wearing clothing by Thor Steinar, a brand considered to have close links to neo-Nazism, they will be asked to cover it up and turned away if they refuse to comply.

Under German law, denying the Holocaust, spreading anti-constitutional propaganda and hate speech are illegal, so staff need to be aware of the law and when a criminal complaint is justified.

Wagner has himself received threats and warnings. “I am not worried about my life and health,” he says. “I always report them to the police and I always file a criminal complaint.”