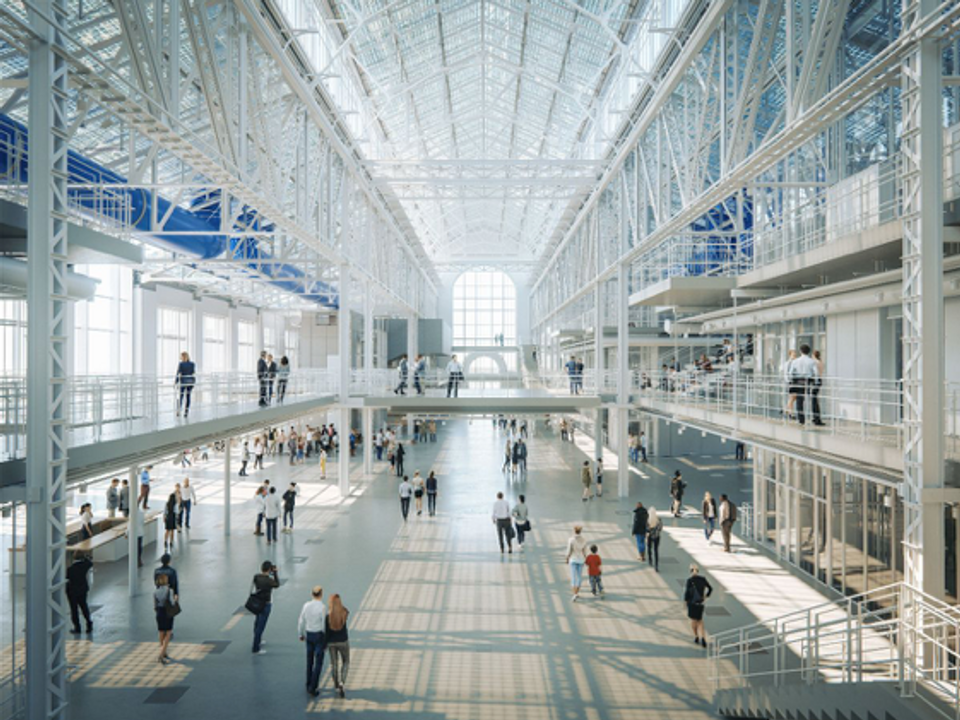 A rendering of the GES-2 complex © RPBW

Russia’s richest man, Leonid Mikhelson—worth $27.4bn according to Forbes—will unveil his GES-2 contemporary art centre in Moscow, near the Kremlin, in September 2020. He made the announcement to reporters on Monday while flanked by the architect Renzo Piano, who presented his redesign of the site.

At a press conference at Russia's official news agency Tass, the billionaire stressed that the venue, a former power plant built in 1907, “is not a museum”. The complex will be 41,000 sq. m in total with 19,000 sq. m making up the GES-2 building.

“We expect that people will come there and bring their ideas,” he said of the space, which will include exhibition halls; a 420-seat theatre and concert hall; a car park that will also be used for activities; and workshop space in a former Smirnoff vodka warehouse on the site. The central hall, once full of machines, will function as a nave linking the entire space. Towering 70-metre pipes, chosen by Mikhelson and Piano, are part of the design. The architects have included solar panels to make the space sustainable.

GES-2 will be run by the V-A-C Foundation, created by Mikhelson and Teresa Iarocci Mavicа in 2009. V-A-C, which sponsors exhibitions in Russia and internationally, opened an exhibition space at Palazzo delle Zattere in Venice in 2017. Mikhelson would not specify the cost of GES-2, which has previously been estimated at $300m, saying only that “the frightening figure in my mind has doubled”.

Piano, the Italian architect who has also designed the Centre Pompidou in Paris and the Whitney Museum of American Art in New York, said light and and openness will be the defining features of GES-2, illustrating his points with renderings shown on a large screen before a packed hall. International culture journalists flew in for the event and Moscow’s top museum directors, some also in the midst of redesigns, were in the audience.

He described the site as “amazing” and Mikhelson as a “good man”, whose motives in taking on such a large project he continues to scrutinise but in whom he finds a kindred spirit obsessed with building. Visitors to the site, he said, “will go out from under a glass roof, to a piazza full of birch trees,” with free access to all.

Forbes Life noted the banter between the two of them during an earlier tour of the site, during which Piano described GES-2 as “a gesture of civic responsibility” by Mikhelson and that the new site was “a reason to be proud of Moscow”.

Mikhelson has also been shown on Rossiya 24, an official state television channel, in one-on-one meetings with Putin. On Tuesday, the channel ran several reports about GES-2. The site is on Bolotnaya Embankment in the former Red October factory district near the Kremlin. Nearby are politically significant sites: Bolotnaya Square became famous for the protests against President Vladimir Putin in 2012 that presaged recent crackdowns in Moscow. There is also Christ the Saviour Cathedral—blown up on Stalin’s orders in 1931 and rebuilt in the 1990s, the church was the site of Pussy Riot’s famous “punk prayer” against Putin in 2014, which led to the trial and imprisonment of members of the feminist collective.

Several of GES-2's five seasons of V-A-C programming, unveiled by Mavica and the curator Francesco Manacorda, are focused on philosophical topics such as truth and the “multiplicity of cosmologies”. Season three will study the Russian concept of “motherland” from a gender perspective. Icelandic artist Ragnar Kjartansson’s interpretation of American soap opera Santa Barbara for the first season was inspired by an article about the series’ impact on Russia, written for Foreign Policy magazine by Mikhail Iossel, a Leningrad-born writer now based in Canada.

GES-2 is in the middle of a Museum Mile being promoted by the Moscow city government to link the Garage Museum of Contemporary Art, the State Tretyakov Gallery, and the Pushkin State Museum of Fine Arts, which are all currently under reconstruction.