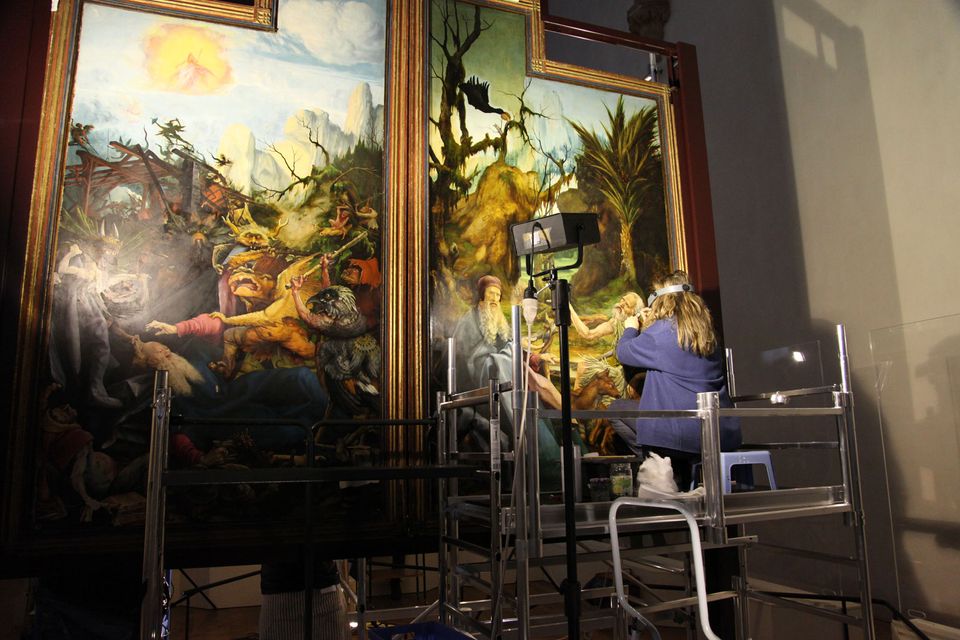 A restorer working on the Isenheim altarpiece in Colmar © Musée Unterlinden, Colmar

The restoration work on the Isenheim altarpiece in Colmar, eastern France, has reached the halfway point. Over the past four months, restorers have removed most of the old varnish on four of the 11 biblical scenes, painted five centuries ago by Mathis Gothart Nithart (also known as Matthias Grünewald). The works were rehung in July in the city's Unterlinden Museum and restoration of the other panels will resume on 12 October. The difference between the cleaned compositions—St Anthony assailed by the demons, his encounter with St Peter, the Nativity and the concert of the angels—and those yet to be treated is striking.

Although a forensic examination by the Research and Restoration Centre of the French Museums concluded that the whole work was remarkably well preserved, the now restored scenes had been coated in a heavy, yellowed varnish, with some parts heavily obscured by the migration of copper-ions from the green pigments.

Now visible once more are a palm tree in the desert and fir trees in the mountains, little black demons bouncing in the sky, and a charming cherub peering from a window over the angel musician, who has recovered his delicate pastel colours. The average 30-micron thickness of the varnish has been reduced to around eight microns, says Anthony Pontabry, who is in charge of the restoration team that has been working on the project.

Visitors can also see cleaning tests on the panels still to be treated. The most difficult task will be to restore the large Crucifixion, which is much darker—and not only because the artist wanted to evoke a gruesome scene.

Another team has cleaned the wooden sculptures of St Anthony and the apostles by Nicolas de Haguenau that formed the core of the altarpiece, recovering some of the ancient polychromy. Overall, more than 30 people are working on the restoration of the sculpted group and the paintings as well as the wooden panels and frames. The work is scheduled for completion in 2022.

The ambitious project started in 2018, seven years after a bold attempt had been made to remove most of the varnish in just a few days without any scientific guidance. That attempt was halted by the French culture minister. Pontabry says the earlier restoration resulted in no serious damage, although the cleaning was "quite uneven". This time, the restoration team wants to do everything right. Pontabry says that a new generation of nano-particle gel has been used to clean the darkest parts.

The paintings have also been screened by an optical coherence tomography machine that the Research and Restoration Centre acquired in 2017. More commonly used in ophthalmology, the device generates 3D images that can accurately map the inner structure of paint and varnish layers as thin as 0.003mm. The first tests at the C2RMF were conducted on Leonardo's Saint John Baptist with Haida Liang, from Notthingham Trent University. This laser-aided system, says Vincent Detalle, who is responsible for this area of research on the altarpiece, “allows for a real-time control of the varnish removal” to avoid any contact between the solvent and the paint layers. “For this, old-time restorers relied on their instincts; now we can put an exact figure on this ‘feeling’,” he says.