The Missouri-born artist, known for his shaped canvases and bold patterns, became a leading American abstract painter after moving from Paris to New York 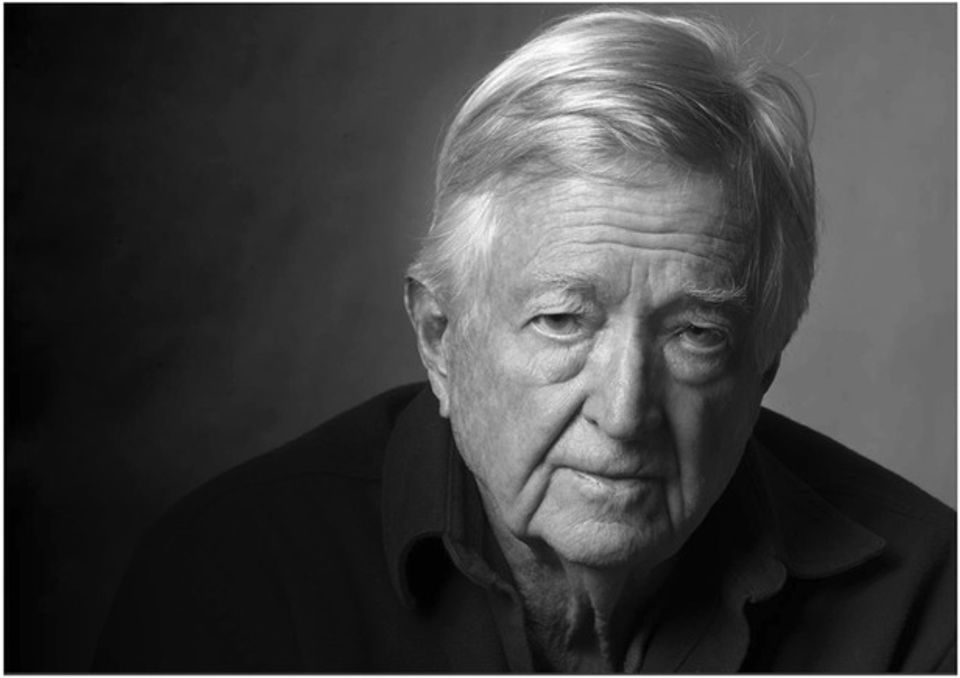 Jack Youngerman, the pioneering post-war abstractionist, has died at 93. According to The New York Times, who first reported the news, the artist’s death was a result of complications following a fall.

Youngerman was born in Missouri in 1926, raised in Kentucky, and studied art at the University of North Carolina for only one year before being drafted into the US Navy in 1944. After the Second World War, he moved to Paris to study at the École des beaux-arts on the GI Bill, joining a long list of artists who received a federally subsidised education, including Robert Rauschenberg, Sam Francis, Ellsworth Kelly, and Roy Lichtenstein. “I went straight from Kentucky to Paris by way of the Navy, because in 1947 all the art schools in New York were full,” Youngerman said in a 1966 interview with Artforum. “In Paris I really wasn’t in the art world. I lived in a fantastically removed way.”

Following the encouragement of the art dealer Betty Parsons, Youngerman moved to New York in 1956—a pivotal year for American painting as it marked the death of Jackson Pollock and a turning point for Abstract Expressionism. Notably, Youngerman, who drew inspiration from bodies of work such as Matisse’s cutouts and Jean Arp’s relief prints, preferred a flatter painting style rather than the heavily applied, impasto surfaces made popular at the time by artists like Willem De Kooning.

In New York, Youngerman quickly became a leading figure among the second wave of abstract painters, pushing back slightly against the trends of the period while remaining firmly rooted in abstraction. He was included in the pivotal 1959 show at the Museum of Modern Art, "16 Americans", along with artists such as Jay De Feo, Ellsworth Kelly, Jasper Johns, Robert Rauschenberg and Frank Stella. “I miss Jack and I miss the enthusiasm and touch that made his paintings so striking,” Stella says of his long-time friend. “It is as though beauty was imprinted into the canvas of our time.” 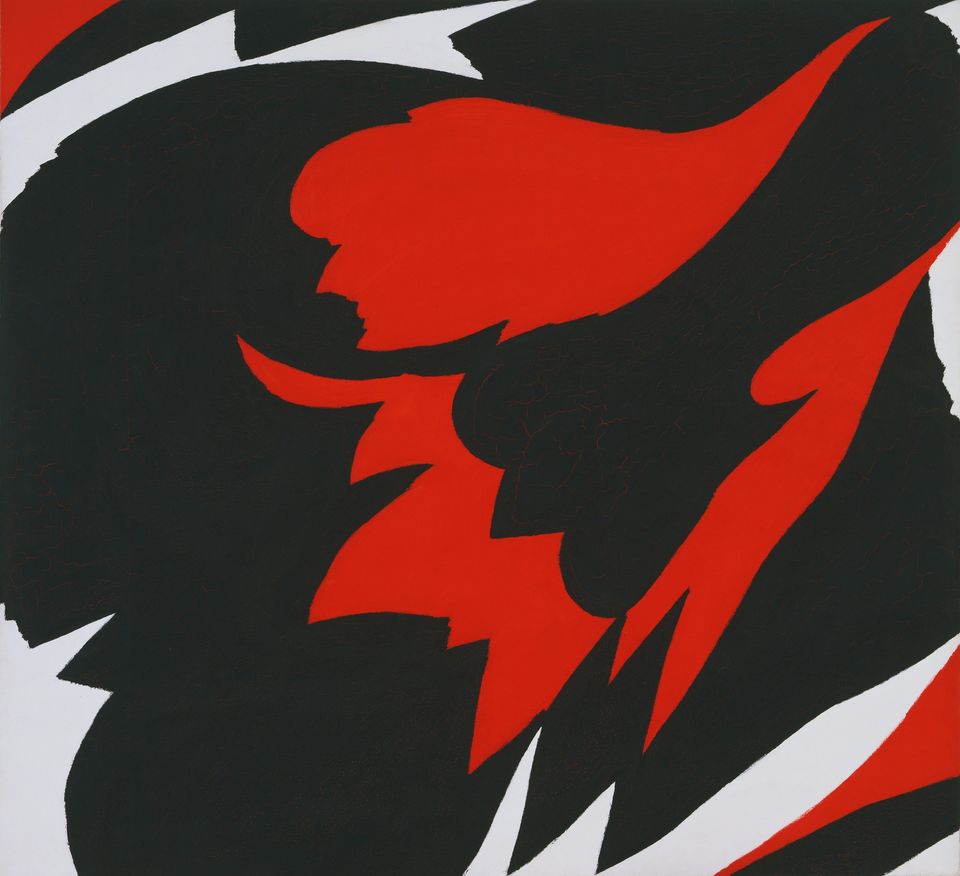 Youngerman began creating elaborate wall reliefs in the 1970s, first through the use of irregularly shaped canvases, which he continued to explore and expand for the rest of his life, before moving on to constructions made of fiberglass, polystyrene, epoxy and other materials. “Shaping has been the central issue of Jack Youngerman’s painting for most of his career. But it is only in this year’s Pace Gallery exhibition that he has made this concern manifest in a literal way,” wrote April Kingsley in a 1972 review of a show of such works at Pace. “The seductive physical beauty of Youngerman’s new work is beyond question.”

In 1986, Youngerman had a retrospective at New York’s Guggenheim Museum. “He has an open, vigorous, all-or-nothing temperament, alike as sculptor and as painter, that has left him open to new experience and new ideas at an age when many artists settle for lucrative replication,” wrote John Russell for the New York Times in a 1986 review of this retrospective. “And when he gets a new idea, he works his way through it with both sensitivity and persistence.” 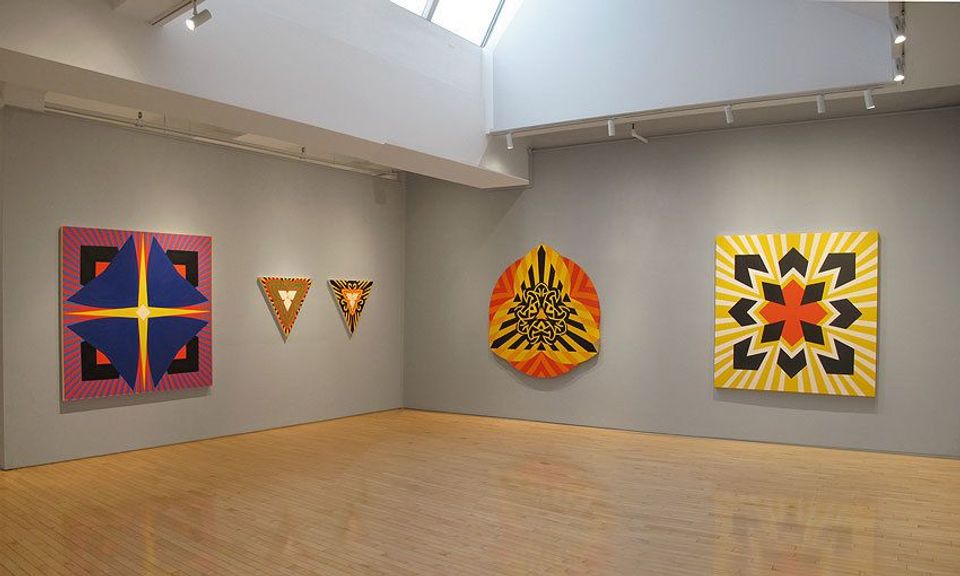 This curiosity proved ceaseless in Youngerman’s life. In 1995, he moved to Bridgehampton, New York, where he had maintained a studio since the 60s. There, the artist continued exploring new means of painting, and in recent years he created several series in an unorthodox Op Art style, as well as elaborate reliefs made from wood and other materials.

Today, Youngerman’s work can be found in permanent collections around the world, including the Whitney Museum of American Art and the Guggenheim in New York, the Smithsonian’s National Museum of American Art and the Hirshhorn in Washington, DC, the Museum of Fine Arts, Houston, and the High Museum in Atlanta. “I think of painting as an ‘expression’ beamed to the world,” he said in the 1966 interview. “For me painting is a question of a response to life.”