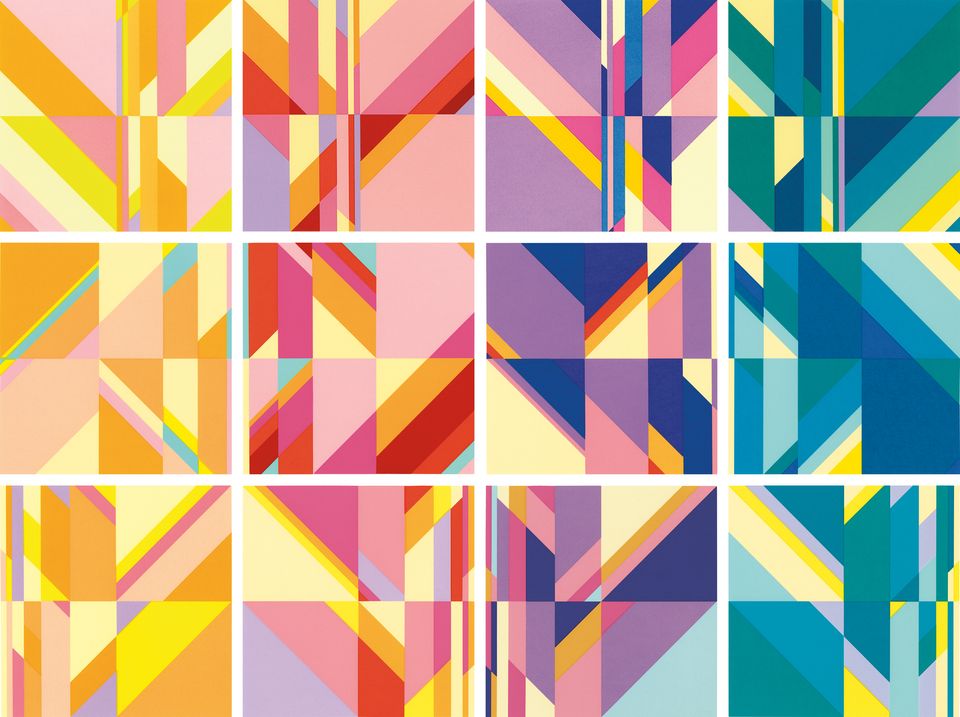 The leading Palestinian artist and writer Kamal Boullata died at his home in Berlin yesterday at the age of 77. He was best known for his colourful, geometric silkscreens and his use of Kufic script, an early form of Arabic calligraphy. He was also the author of several pioneering books and articles on Palestinian art and contemporary culture.

“The Meem Gallery team is deeply saddened at the passing of our dear friend Kamal Boullata," says his gallery in a statement. "We take comfort in our special memories of him; spending time with him and his wonderful wife Lily Farhoud. Kamal was an incredible artist, thinker and writer. He will be remembered through his words and his art by so many.”

Boullata's work was inspired by his childhood in Jerusalem, where he was born in 1942, and the rich pattern and decoration he encountered there, from the Byzantine architecture of the Dome of the Rock to the embroidery of traditional Palestinian dress. The theme of identity was also key to Boullata's work, having been forced into exile following the 1967 occupation of Jerusalem by Israel. He spent the last five decades of his life moving between the US, Morocco, and France, before settling in Berlin in 2012.

After studying fine art in Rome at the Accademia di Belle Arti in 1965, Boullata went on to receive an MFA from the Corcoran School of Art in Washington, DC in 1971. In the 1970s and 80s, he was part of the hurufiyya movement, where Arab artists experimentally brought together Arabic calligraphy and Modernism. His later works moved away from geometry towards an interest in depicting light and transparency. In a video interview with the online publication Electronic Intifada, Boullata says that of his paintings of natural light “perhaps it was the light of Jerusalem that I have been seeking to recapture all along”. In 1993-94, Boullata received a Fulbright Senior Scholar Fellowship to research Islamic art in Morocco, and in 2001 he began research into the origins of painting in Palestine after receiving a Ford Foundation Research Grant. His pioneering studies led to the publication three books, some of the first to explore these subjects. "I am not a historian. I am an artist that wanted to give some order to the chaos that Palestinians have been living through," Boullata said in a 2009 interview with the Emirati newspaper the National.

Tributes to the artist have poured out on social media. "Kamal was simply a giant of art & culture of our age," posted Sultan Sooud Al Qassemi, an Emirati lecturer in Middle Eastern art and politics and the founder of Sharjah’s Barjeel Art Foundation. "Not only was Kamal an accomplished artist, he was also the author of what is perhaps the most important book on the subject of Modern and contemporary art from Palestine titled Palestinian Art: from 1850 to the Present."

Myrna Ayad, an art adviser, cultural strategist and writer who was the former director of the Art Dubai fair, wrote on Instagram: "We lost a great. Thank you for celebrating the Arabic letter and word. Thank you for recalling Palestine. We won't forget you." The artist Steve Sabella, a close friend of Boullata's, told The Art Newspaper: "I had dinner with Kamal three weeks ago just before I left for Jerusalem, the city of our birth. He looked young, energised, inspired, speaking about many projects. From the moment we met in 2002, any conversation with Kamal ignited my imagination. Only beauty emerges when one delves into his art and listens to his carefully chosen words -words that I felt always came out from the heart. Kamal inspired thousands in his life, and I do feel his journey has just begun. Kamal's departure is not a loss, but a reward to all humanity."

Boullata’s works have been exhibited in Europe, the US, France, and the Middle East and can be found in collections including the British Museum, London; the Institut du Monde Arabe, Paris; the New York Public Library; Barjeel Art Foundation, Sharjah; and Mathaf:  Museum of Modern Arab Art, Doha. Recent solo exhibitions include Addolcendo at Meem Gallery, Dubai (2017); ‘... And There Was Light’ at Berloni Gallery in London (2015); and Bilqis at Wiensowski & Harbord in Berlin (2013).

A symposium, book launch and exhibition of Boullata's work at the West Court Gallery, Jesus College in Cambridge, England, is scheduled for the end of January 2020. His paintings will also be included in the touring exhibition Taking Shape: Abstraction from the Arab World, 1950s-1980s, organised by the Barjeel Art Foundation and five US university museums in 2020. Two books by the artist are due to be published in the autumn this year, published by Hirmer Verlag; There Where You are Not focusses on the artist's writings on art, while Uninterrupted Fugue is about his own works.