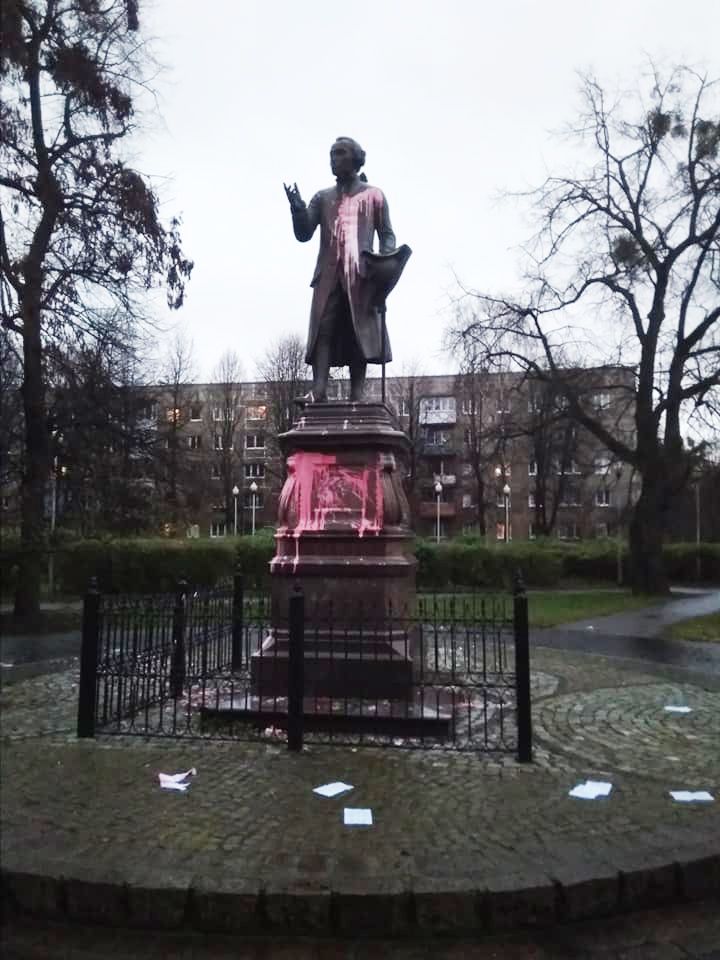 An unknown assailant has splashed pink paint on a monument to Immanuel Kant and his tombstone in Kaliningrad, the former German city of Königsberg where the philosopher lived.

On Tuesday morning, the editor of a local newspaper noticed on her way to work that the statue in front of Immanuel Kant Baltic Federal University had been defaced and posted photos of the damage on her Facebook page.

Soon after, the director of the city’s landmark cathedral, next to which Kant is buried, posted photos of a similar attack on his tomb.

Although the assailant or assailants had not been apprehended as of Tuesday evening, there was a clue to the motive in leaflets scattered near the university monument that denounced Kant, who died in 1804, as a traitor.

“Shame to traitors! Shame to Kant! Glory to Rus!” read the leaflets.

The Red Army captured Königsberg, the capital of East Prussia, in 1945 from Nazi Germany and it became part of the Soviet Union as Kaliningrad after ethnic German residents fled or were expelled.

The monument to Kant, designed by the German sculptor Christian Daniel Rauch, was originally erected in the 19th century, disappeared during the Second World War, and was recreated in 1992.

Putin has praised Kant, who is a point of pride for many Russians in Kaliningrad. During a visit to the university in 2013 he said that “Kant can and should be a symbol not only of your university but to some extent a symbol of the entire region” and beyond. But nationalists have recently condemned veneration of the philosopher as unpatriotic after he took the lead in a vote to rename the city’s airport and he has since fallen to second place, behind the Russian Empress Elizabeth, the daughter of Peter the Great.

In Facebook posts on Tuesday, Russian liberals criticised the attack, but some contemporary artists treated it with humour as a possible act of performance art. Yesterday, the paint was cleaned off the monument and the tomb.