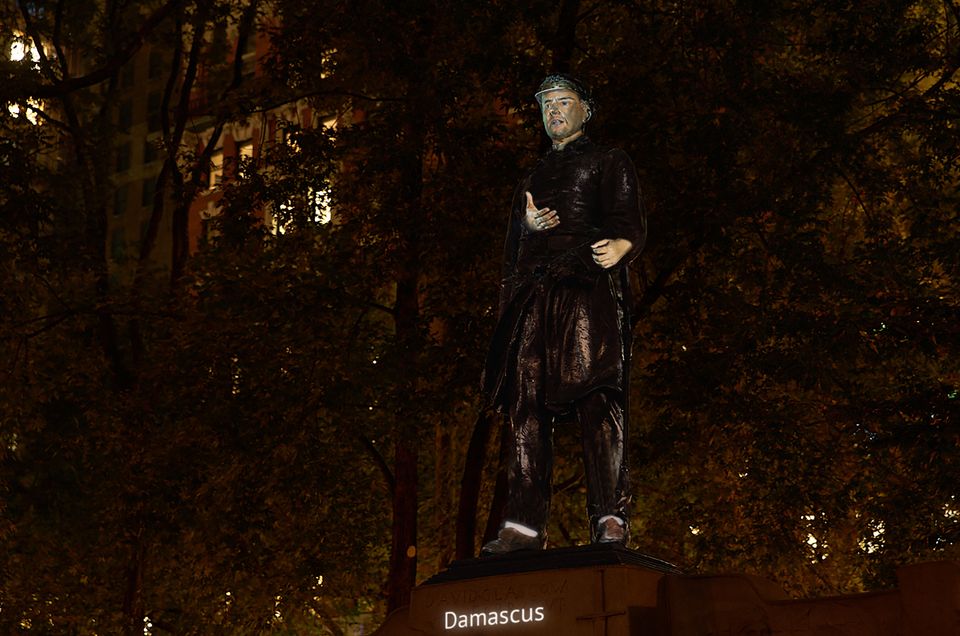 Madison Square Park’s statue of the Civil War-era Admiral David Glasgow Farragut will be taken over this week by a public art project honouring refugees, by the Polish-born artist Krzysztof Wodiczko. The site-specific work, called Monument, features the faces and figures of resettled refugees projected onto the monument, as well as audio of the individuals’ telling their personal stories.

“Speaking from the monumental pedestal, by telling the truth of their unspeakable civil war experience, the refugees wish to contribute with their public voice to the ending of civil wars, as well as to a closer understanding of the refugees’ lives and of the help they desperately need,” Wodiczko says. “They also wish to be acknowledged for their contribution to their new country and for their own American success stories. The presence of a diversified public park audience is in fact the most welcoming situation and a reason for such a project to be public.” Commissioned by the Madison Square Park Conservancy, the work runs every evening except Sundays, from 16 January to 10 May, and will be complimented by a series of public programmes, lectures, and events.

To realise the project, Wodiczko partnered with the Refugee Council USA and Integrated Refugee & Immigrant Services, recording interviews with people who were displaced by civil wars in Africa, Central America, South Asia, and the Middle East. In the final 30-minute looping work, the participants share their own experiences of upheaval and relocation, their images superimposed on top of a memorial to the American Civil War.

“I want to be of help to those who lived through wars, and to work with them contribute to cultural change,” Wodiczko says. “Existing and newly built war memorials must be subjected to special transformative actions, events and interpretations that will make them useful for the process of creating new cultural conditions and a new consciousness toward the ultimate future, one in which there will be no more need for new war memorials to be built.”

The artist, who was born in Warsaw in 1943 and considers himself a “child of one such city of war and a witness-survivor of the post-war trauma suffered by millions”, adds that “the truest memorials are the war-torn cities themselves, and their inhabitants”.

At the same time as Monument, another video projection-based installation by the artist that compares the deep divisions of America's current political landscape with historic precedent is on view at Galerie Lelong. A House Divided… features recordings of Staten Island residents expressing their political views, which are often at odds with the opinions of their neighbours and families. This time, Wodiczko has projected the images on top of two eight-foot statues of Abraham Lincoln that face off against each other on either side of the gallery.