Provenance continues to be one of the main challenges affecting the market for Islamic art. To sell a work, an auction house now needs properly documented, rather than simply reasonable, proof of exit from its country of origin prior to a threshold year that has been set out in legislation. This is designed to prevent illicit trade and looting.

While adherence to the act is welcome, the new government of Egypt has been challenging sales wildly over the past 18 months, allegedly even claiming the entire Egyptian section of one antiquities sale. This has resulted in legally sellable objects being left to languish on shelves for fear of seizure.

Despite these strictures, however, the Islamic art market continues to grow. At Sotheby’s and Christie’s, sale totals and sell-through rates were higher in the April sales this year than in either the April or October sales last year. At Sotheby’s, 12 lots sold for more than £100,000 (with fees), while Christie’s sold seven for more than £100,000 (with fees). Almost a third of these 19 objects was bought by institutions. 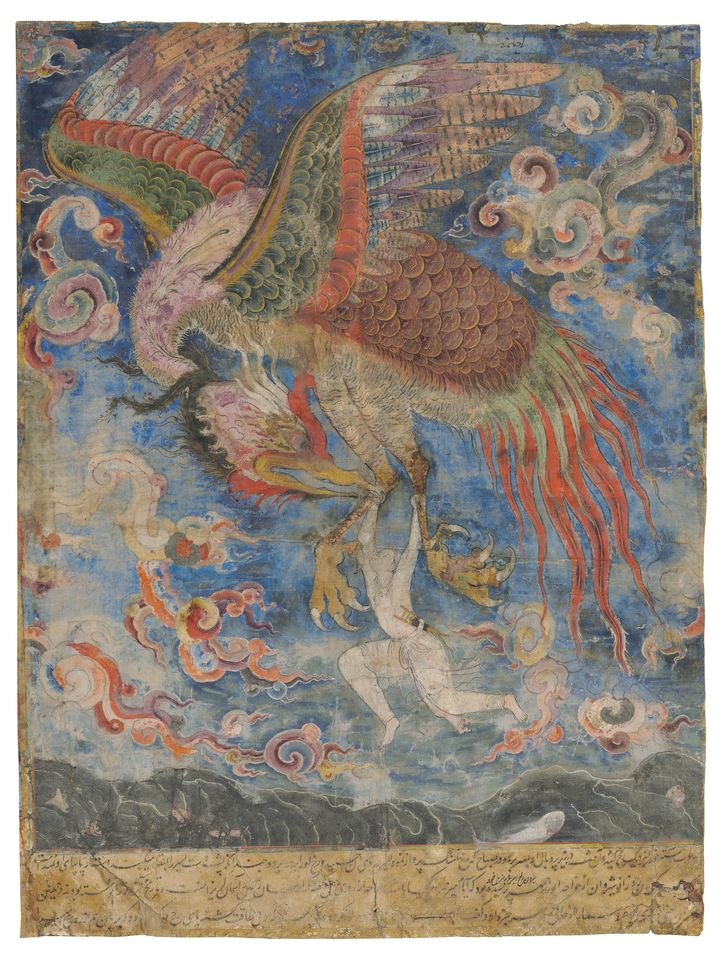 On 20 October Christie’s will offer a previously unrecorded leaf of the Hamzanama manuscript (1564), showing Amir Hamza hanging from the legs of the Rukh bird (est. £200-300,000). Courtesy Christie’s

And more exceptional items still turn up. On 20 October, Christie’s offered a previously unrecorded leaf of the great Indian Hamzanama manuscript (1564). Estimated at a conservative £200,000-£300,000, the page sold for £821,000 to an anonymous buyer. The illustration shows Amir Hamza (the Prophet Muhammad’s uncle) hanging from the legs of the phoenix-like Rukh bird, and was the highlight of Islamic Art Week (14-25 October).

Given the focus on provenance, single-owner collections, which tend to be well documented, are popular with auction houses. On 19 October, Sotheby’s offered the Khosrovani-Diba collection of 35 mostly Indian miniatures, which included a Mughal painting of a royal horse attended by three grooms (around 1570-80) that sold for £257,000 with fees (est £200,000-£300,000). This work is known to have been in the imperial libraries of three Mughal emperors. Sotheby’s main sale also included 50 lots from the manuscript collection of the late Jafar Ghazi. Parts of this collection have been selling successfully at Christie’s salesrooms since 2008. The two single-owner collections soared with 88% and 80% sell-through rates, and produced the second-highest price of the week, £473,000 for a beautiful 15th century Persian manuscript from the Jafar Ghazi collection, which sold to a private European buyer.

Recent upheavals in Turkey failed to dampen the market where a fifth of the week’s 25 lots fetching over £100,000 (with fees), were of Turkish origin. In April this year a European oil painting of Sultan Osman, sold at Sotheby’s to the Turkish government for £430,000 (£521,000 with fees) for display at the Topkapi Palace in Istanbul. This month, Sotheby’s offered a similar European painting of Bayazid I (around 1580), which sold for £185,000 to "an institution".

Brexit also had no discernible effect, even though a couple of owners had removed items citing uncertainty over VAT and future import and export regulations, according to Romain Pingannaud of Christie’s South Kensington’s Islamic department. Most, however, continued to consign, believing that the lower value pound and the perception of art as a quiet but stable investment will encourage buyers. Pingannaud also points out that, although the weaker pound can make a difference to some buyers, most serious players in the art market have too diverse an asset base to worry much about Brexit. But Christie’s very recent introduction of smaller, less glitzy, catalogues may have had a negative impact. Where Sotheby’s have remained fairly consistent, Christie’s King Street’s sold totals and sell-through rates failed to increase this October for the first time in two years.