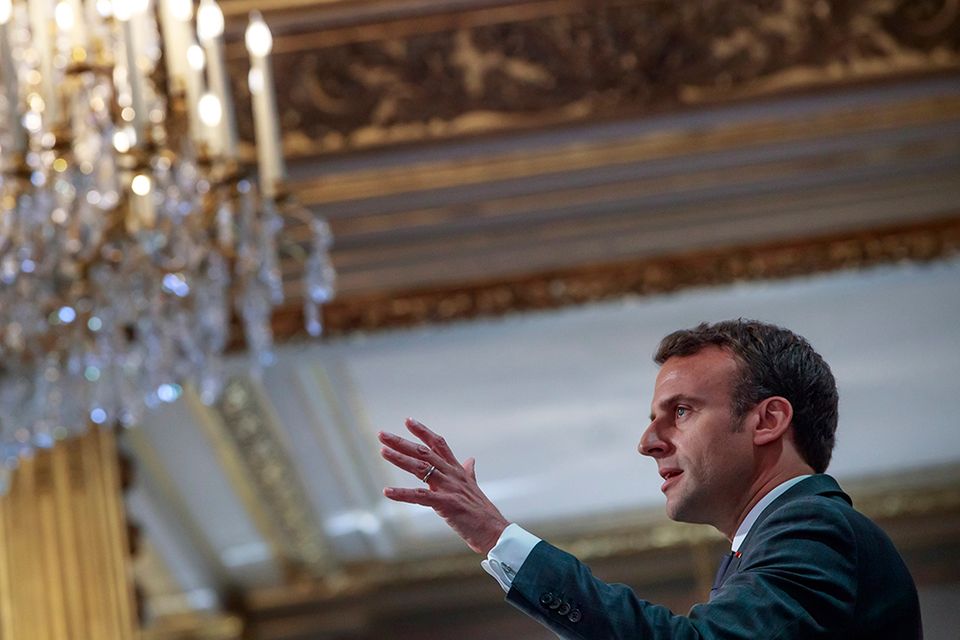 The French President Emmanuel Macron has seized upon the fire that ripped through Notre Dame cathedral last month as a symbol for France’s fresh start after months of protest by the Yellow Vests movement.

“We have to become better than we are…it is up to us now to renew with the thread of our national project, what made us, what unites us … We have so much to rebuild…” Macron told the nation in a TV address on 16 April in which almost every sentence had a double meaning; “the cathedral fire” could easily be switched with “Yellow Vests’ uprising” and “rebuilding Notre Dame” with “reconstructing a fragmented nation”. The day before, as flames engulfed the roof of the medieval cathedral, the president had abruptly postponed his much anticipated address to the nation announcing a list of reforms, including income tax relief.

Macron drew his inspiration from a significant precedent: the fire that partially destroyed the cathedral of Reims in 1914 when it was hit by a German mortar shell. “The images were everywhere in newspapers, on posters in the streets. The reality of the destruction was widely amplified to make Reims the symbol of the country’s martyrdom, before it became the symbol of its reconstruction. It was the most powerful propaganda tool to praise great French culture over so-called German barbarism,” says the art historian Thomas Gaehtgens, the former head of the Getty Research Institute who recently published a book on the Reims fire.

“If they have so much money, why don’t they do something about social inequality?”

However, Macron’s call for national unity did not last long. As soon as France’s wealthiest families and largest companies announced that they would donate hundreds of millions of euros for the reconstruction—€1bn was pledged in less than a week—they were accused by the far left of turning this act of solidarity into a fiscal advantage. The Pinault family, followed by Bernard Arnault, the head of the luxury goods company LVMH, quickly announced that they were not seeking a tax break for their donations, but the damage had already been done. “If they have so much money, why don’t they do something about social inequality?” asked Philippe Martinez, who leads the trade union CGT. “Just start to pay your taxes!” said Manon Aubry, who heads the radical left list for the European election.

Then the far right kicked off its own campaign. “He wants to destroy the symbol of Christendom,” warned the conservative weekly Valeurs Actuelles in response to France launching an international competition to rebuild the spire, which left open the possibility that the structure may not even be replaced at all. At the same time, fake news was circulating on social media, with messages signed by Arabic names rejoicing in the name of Allah over images of the flames engulfing the cathedral.

But the main criticism against the president focused on his intention to rebuild Notre Dame within five years, just in time for the opening of the Olympic Games in 2024. It took 20 years to rebuild the cathedral in Reims, as several architects and experts pointed out. Eric Fischer, the director of the foundation that looks after Notre-Dame Cathedral in Strasbourg, said it could take “decades” to rebuild its counterpart in Paris. Even Stéphane Bern, a TV host who was appointed Macron’s special adviser on cultural heritage, said the work could take ten to 20 years. Meanwhile, Alexandre Gady, the professor of architecture history at the Sorbonne and the director of the Sites & Monuments association, said it was “indecent” to set such an early deadline, accusing the government of short-circuiting the procedures protecting cultural heritage. “It’s all a matter of options of architecture and materials,” says the heritage architect Enrico d’Agostino, who adds that “once these choices are made, the preliminary studies should take two years”.

Another source of controversy has been the lack of heritage funding and the alarming state of churches in Paris and elsewhere in France. Over the past decade, the budget for the maintenance of historical monuments has been cut by a third, the equivalent of €160m. The city of Paris pledged €50m towards the reconstruction of Notre Dame, an amount equal to what it has spent on all of its 139 churches over the past four years. The satirical weekly Le Canard Enchainé pointed out that, for 2019, the state had only budgeted €18m for all of its monuments and the 86 cathedrals it owns across the country.

Appeared in The Art Newspaper, 312 May 2019
More NewsTopicsPoliticsParis ProtestCathedral of Notre Dame