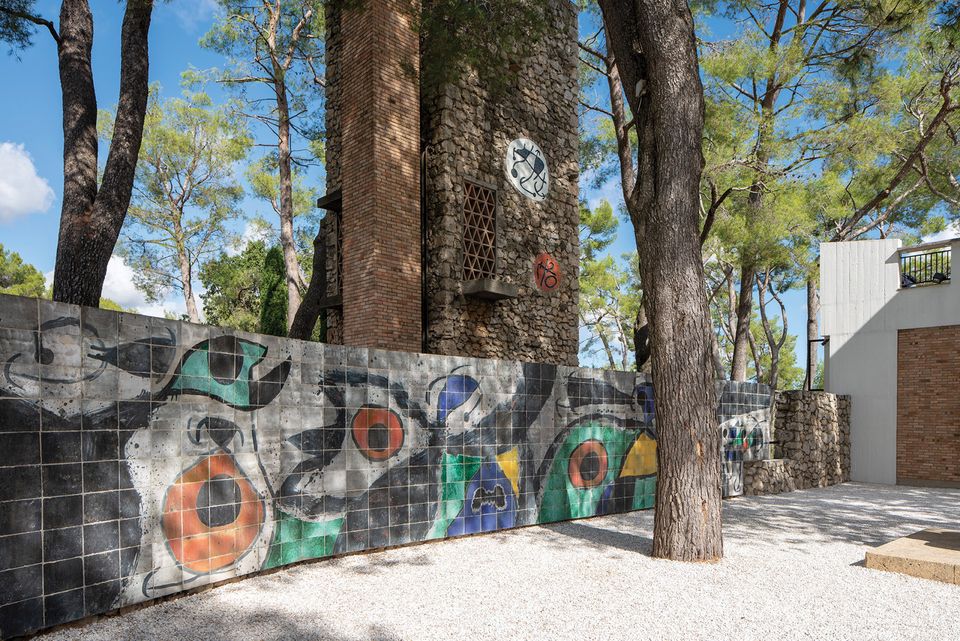 The Maeght Foundation is one of the south of France’s most famous art destinations: built by the dealers Marguerite and Aimé Maeght in 1964, it was the country’s first private museum and houses a premier collection of Modern art by Pierre Bonnard, Joan Miró and Alexander Calder, among others.

A highlight is the Miró Labyrinth, conceived by the artist and the father-and-son Spanish ceramicists the Artigas, between 1961 and 1981. The terraced labyrinth winds among pine trees in the foundation’s grounds, dotted with 20 works of art in ceramic, marble, concrete and iron.

But time has wrought its damage, both visible and structural. With €65,000 raised from the friends of the foundation and other sources, specialist conservators completed the restoration of the 14 ceramics in late September. The works were cleaned with biocides, consolidated with acrylic resin, then tinted with acrylic paint and finished with a polyurethane varnish.

“The next phase is to restore the concrete and iron pieces, notably the arch and the pitchfork,” says Anne Bourgois, the foundation’s development director. This is planned to start in early 2021, supported by a new fundraising appeal via social media. The concrete arch will be cleaned to remove algae and treated with biocides before it is steam cleaned, Bourgois says. The coating on the iron-and-bronze pitchfork, which has dulled with age, will be replaced with a clear and matte finish, restoring the contrast between the two materials.

A third metal work, Totem (Personnage) (1970), has corroded because its base stands in water and has lost some of its thickness, endangering its stability. It will be measured with ultrasound before a reinforcement strategy is decided.

“Further down the line are plans to conserve the foundation’s collection of 7,000 works on paper, including rare, large-scale Miró lithographs”

Further down the line are plans to conserve the foundation’s collection of 7,000 works on paper, including rare, large-scale Miró lithographs made in the Maeghts’ printing press, as well as gouaches, etchings and posters. However, “there is no question” of touching the external Giacometti courtyard, featuring examples of the sculptures L’Homme qui Marche and Grande Femme Debout. “Alberto Giacometti’s own wish was that they should remain like that, and weather over time,” Bourgois says.

The foundation has no public funding for operating costs although it does receive public subsidies. Last year, the Alpes-Maritimes department funded the €150,000 restoration of some of the curved roofs of the iconic Josep Lluis Sert building. The Sud region is providing €50,000 annually towards a three-year plan for the preservation and renewal of the pine trees, which are now 100 years old.

The bitterly divided Maeght family—Aimé and Marguerite’s son Adrien, whose children include Isabelle and Yoyo—have bankrolled the foundation in the past. Now the Covid-19 crisis has hit hard, since 70% of income comes from ticket sales. There was “a notable increase in visitors in July and August”, Bourgois says, but the autumn season has been curtailed by France's second coronavirus lockdown; the foundation remains closed to the public until 1 December. However, an international council was recently established to bolster support for the foundation.

UPDATE: This is an updated version of an article that appeared in the November print edition