Traditional medium is back in fashion amid looming Brexit 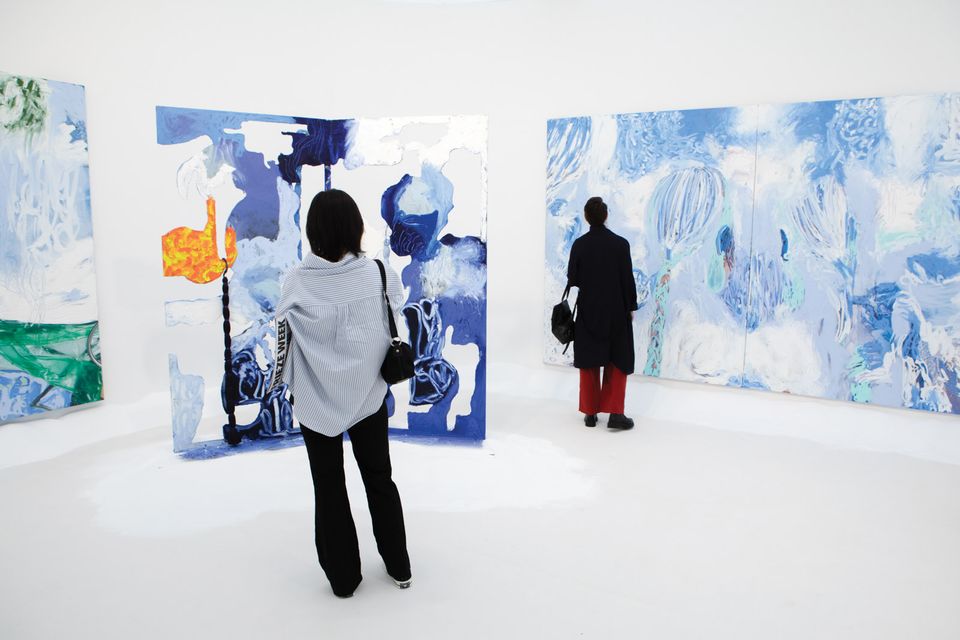 It is no surprise that the trade is turning to the safe haven of painting amid Brexit uncertainty and escalating political instability. “When a recession looms, everyone goes back to painting. It is the equivalent of gold in art terms,” says the artist Shezad Dawood, who is presenting a Frieze Live project at the fair called University of NonDualism.

Sam Thorne, the director of Nottingham Contemporary, agrees. “Painting is always a safer bet.” When he attended Frieze in 2006-07, “there was so much video”, he says, adding that a raft of painting exhibitions in London this summer, such as Faith Ringgold and Luchita Hurtado at the Serpentine Galleries, also reflects the “current strength of painting”. This week, painting exhibitions around London include Mark Bradford at Hauser & Wirth and Peter Doig at Michael Werner as well as Albert Oehlen, who has shows at the Serpentine Galleries, Max Hetzler and Lévy Gorvy.

The acceleration of technology might also explain this revival. “People don’t want to lose the humanity of making things by hand,” says Silvia Ortiz, the director of the Madrid-based gallery Travesía Cuatro, which is showing a salon-style presentation of paintings by Charlie Billingham and Milena Muzquiz.

An artist known primarily for her performance works is Chicago-born Huanca, whose blue-and-white canvases fill Simon Lee’s entire stand. Huanca’s paintings, made by reworking photographs of the bodies of her performers (priced from $50,000), and her painted sculptures, have almost completely sold out.

Emerging artists are also picking up their paint brushes, with figurative painting dominating Sunday, the nearby satellite fair, as well as the Focus section at Frieze London. At Tiwani Contemporary’s stand in Focus, three portrait paintings priced at £10,000 each by the young British-Nigerian artist Joy Labinjo sold within hours of the fair’s opening. Meanwhile, at Sotheby’s evening sale earlier this week, Nicole Eisenman’s Close to the Edge (2015), a painted depiction of a sleeping figure, sold for the record price of £639,000 (with fees).

“Paintings are easier to sell to private collectors because they are unique pieces rather than editions,” says Aleya Hamza, the director of the Cairo-based Gypsum Gallery, also in the fair’s Focus section. She is showing paintings by the Kuwaiti-born Tamara Al Samerraei, priced between $5,000 and $16,000.

"Painting is the equivalent of gold in art terms"

The bet on paintings seems to be paying off. Timothy Taylor’s stand is dedicated to a solo show of works by the US artist Jonathan Lasker; the gallery has so far sold six large paintings, priced between $65,000 and $200,000, and three small paintings, each costing $12,000. Taylor says: “Lasker’s paintings have a lushness in their impasto and brushwork that feels simultaneously contemporary while also rooted in the best traditions of 20th-century abstract painting.”

At the VIP preview day, Hauser & Wirth sold paintings by Cy Twombly, Philip Guston and Mark Bradford totalling more than $14m. At David Zwirner, a huge abstract painting called Manifestation (2018-19) by Oscar Murillo sold for $400,000, while a work by Kerry James Marshall (Car Girl 2, 2019) sold for $3.8m to a US museum and a figurative Neo Rauch piece (Die Wandlung, 2019) sold for $1.5m. Although a gallery spokeswoman declined to comment on prices, the US artist Sterling Ruby’s Helios paintings at the Gagosian stand reportedly sold for $325,000 each.

While providing a more reliable market than other more cutting-edge art forms, painting has the added bonus of being practical, says the Financial Times art market columnist Melanie Gerlis.“It’s a lot easier to contemplate buying a painting for your wall than a conceptual installation that requires feathers or flowers to be replaced once a month.”