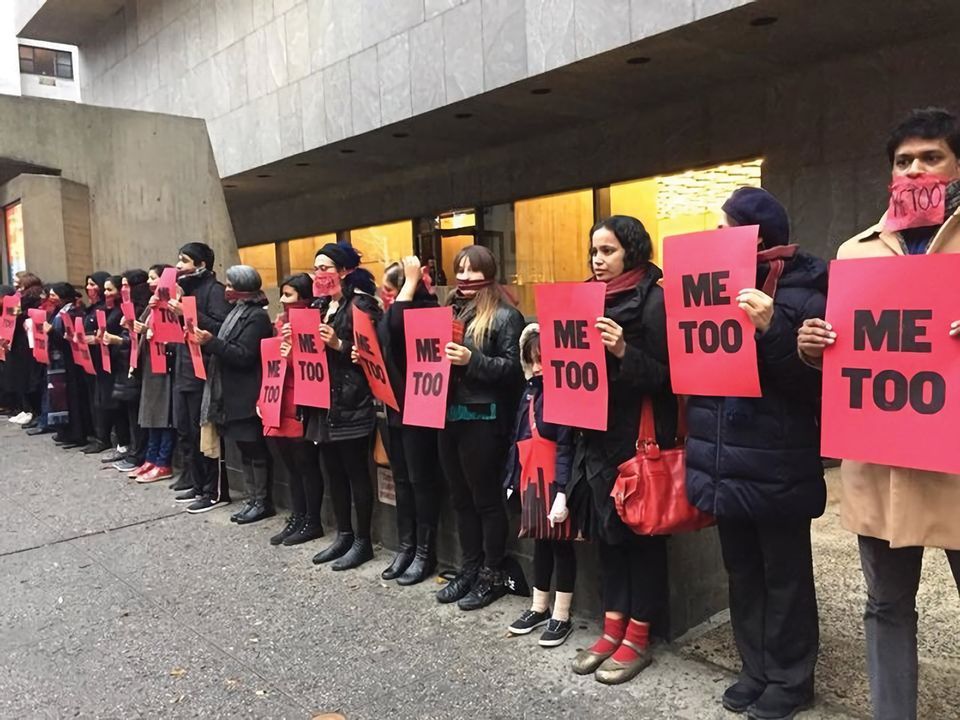 Protestors participating in “#MeToo at The Met” (performance/protest by artist Jaishri Abichandani) on Dec. 3, 2017; the location of Raghubir Singh exhibit. © Priscilla Frank

For the first time in its 17-year history, an entire movement has made it onto Art Review’s Power 100 list, which was released today, 9 November. #MeToo, which is often considered a new phenomenon, but was in fact coined as a term to express sympathy with sexual assault survivors back in 2006, makes its debut at number three.

The ranking is a reflection of the headlines that have dominated the media over the past 12 months. Whether it’s the number of people who have resigned over allegations of sexual harassment, or those who have been put in the spotlight for their actions, #MeToo “has had a distinct effect on how the art world thinks about and conducts itself”, says Art Review’s senior editor, JJ Charlesworth.

The movement has also sparked a rush of exhibitions in galleries and museums, many focusing solely on female artists in the past year. “It’s very much about capturing the effect that the #MeToo movement or phenomenon has had, and how institutions have responded to these criticisms and perspectives,” Charlesworth says.

Meanwhile, the American painter Kerry James Marshall has been named the most influential contemporary artist, claiming the number two spot. Marshall climbed the list from 68 last year, largely thanks to the record-breaking sale of his 1997 painting, Past Times, which sold to the rapper Sean Combs for $21.1m, the highest price paid for a work by a living black artist.

Market aside, Charlesworth says the judges were interested in how Marshall challenges the whitewashing of art history. “He has consistently focused on changing the narrative around contemporary art and his relationship to art history through the perspective of racial politics,” Charlesworth says. “It’s not simply about using art to respond to the present, but to rethink the artist’s position to both society and history.”

Despite the other changes to the list, which denote a marked shift away from the traditional art world power structures, the New York dealer David Zwirner tops the list this year. “We tend to have to remind everybody that we try to come up with a list that reflects power as it is, and not as we would wish it to be,” Charlesworth points out. “The sober fact is that it happens to be a wealthy, Euro-American man. It’s not an attempt to dramatise the other changes.”

Zwirner’s ranking is a result of his financial turnover, his global growth in terms of gallery spaces and the artists he represents–including Marshall–who are among the best in the world.

“It’s also a reflection of his approach, which is very much about paying attention to historical legacy and enduring representation,” Charlesworth explains, noting that aspects of his business such as Zwirner books show a “critical self-awareness”.

Zwirner’s suggestion at a conference in Berlin in May that larger galleries should subsidise smaller ones at fairs has worked in his favour. “Zwirner has been publicly responsive to the problems of commercial power in the art world, and he has been willing to put his money where his mouth is on that,” Charlesworth says.

It is this “ethical attention or responsibility” that gives Zwirner a slight edge over, say Iwan Wirth or Larry Gagosian, Charlesworth believes. “David Zwirner has been in the top section of the list for a very long time, so his ranking should come as no surprise.”