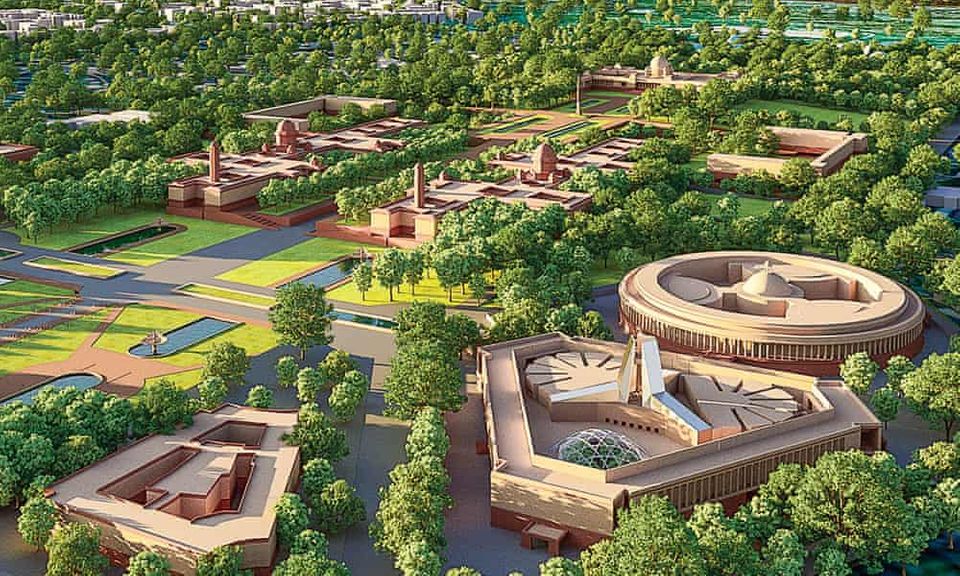 The proposal for a newly designed Central Vista of government buildings in Delhi Rendering: HCP Designs

Despite widespread opposition, the Indian prime minister Narendra Modi has begun a £2bn overhaul of Delhi's grand complex of government buildings in a bid to sever the nation from its colonial past.

At a ceremony held last week, Modi laid the foundation stone for a new building to replace Parliament House, designed by English architects Edwin Lutyens and Herbert Baker, which upon its completion in 1927 became the seat of power for British-ruled India. Since Indian independence in 1947, the building has been used as the meeting place for the republic's houses of parliament.

The new building is scheduled to open in 2022, the 75th anniversary of India's independence. It will be one of several to be rebuilt along the Central Vista, a wide avenue designed by Lutyens which extends from India Gate to the presidential palace.

However, ceremonies are thus far all Modi can achieve. Last week, India's Supreme Court blocked any further construction on the project until it "decides the pending pleas on the issue," the court stated. It added: “We never thought [Modi] would go ahead so aggressively with construction."

Modi firmed up plans for the redevelopment of the imperial complex in May, when India's coronavirus figures skyrocketed to the second-highest number of cases in the world. Pushback came from many politicians who questioned the use of government funds for a "vanity project" at a time when hundreds of millions were facing unemployment and the country was going through its worst financial quarter since records began.

This month, Delhi has been besieged by a national agricultural workers' protest, which has been described as the biggest organised strike in human history. It concerns the proposal of three federal laws that will deregulate crop pricing, potentially reducing the earnings of farmers and exposing them to exploitation by large private companies.

A number of politicians have attacked the Central Vista redevelopment, including Tikender Singh Panwar, who has described the development as a “scandal in the making” and commented: “I see this as a fascist leader wanting to leave an imprint of his glory on Delhi."

Cultural leaders and artists have also questioned the implications of the Hindu nationalist leader embarking on an enormous project to recast the narrative of India's history. In the Guardian, the Indian-born sculptor Anish Kapoor wrote that the redevelopment is Modi’s way of “cementing his legacy as the ruler-maker-builder of a new Hindu India" and "dismantling the Nehru legacy of a secular India".

During the ground-breaking ceremony on Thursday, Modi announced that the new parliament building will be a “symbol of a new and self-reliant India”. He added: “The coming generations will be proud to see the new Parliament House built in independent India. During independence, forecasts were made that democracy will not be successful in India. Today we can say with pride that we have proved the naysayers wrong.”

In October, Modi laid the foundation stone for another controversial nationalist project, the Ram Mandir, a Hindu temple built on the site of a razed mosque in Ayodhya, Uttar Pradesh.