Famous Russian painting of Ivan the Terrible vandalised in Moscow 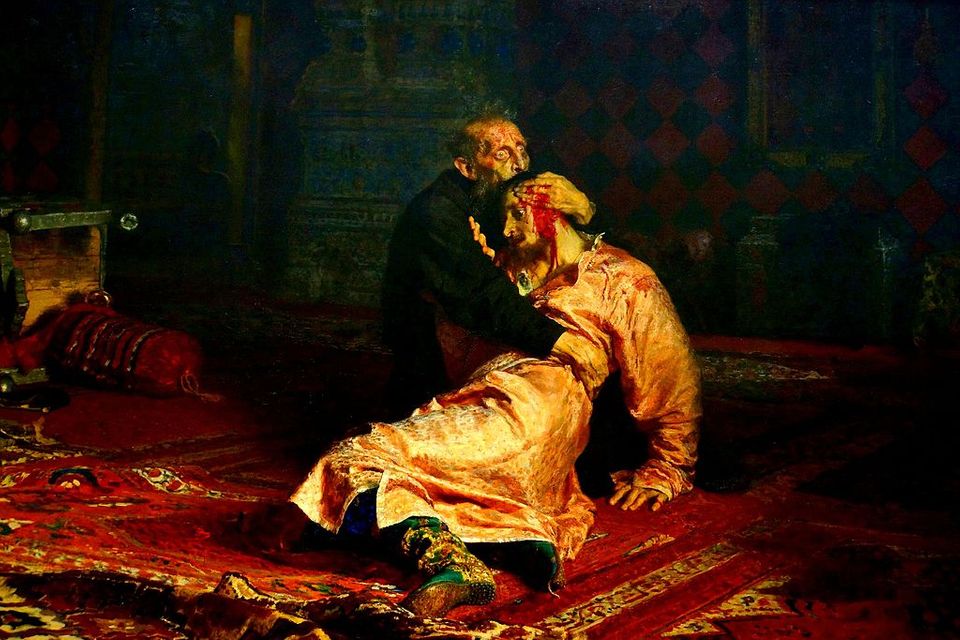 Ivan the Terrible and His Son Ivan (1581) Wikimedia Commons

A man who confessed to being drunk on vodka caused over 500,000 rubles ($8,000) in damage to one of Russia’s most famous paintings, Ivan the Terrible and His Son Ivan (1885) by Ilya Repin, at the State Tretyakov Gallery in Moscow on 25 May.

The attack occurred as staff were preparing for the museum to close on Friday evening, when it has extended hours until 9 pm. Repin’s painting depicts Ivan the Terrible cradling his bloodied son, Tsarevich Ivan, after murdering him in 1581.

In a statement, the Tretyakov said the man burst into “the already empty I.E. Repin hall….and struck several blows with a metal security pole against the glassed canvas” of the painting.

“The canvas has been torn in three spots in the central part of the work on the figure of the tsarevich,” although fortunately, according to the statement, “the most important part—the depiction of the faces and hands of the tsar and tsarevich—were not damaged.”

Russia’s Interior Ministry said in a statement on Saturday that the assailant had been detained, but did not give his name. Subsequent media reports identified him as Igor Podporin, 37, from the city of Voronezh. In a video of his confession released by police later in the day, he said: “I came to see [the painting]. I came at eight in the evening, and then wanted to go to the canteen. I drank 100 grams of vodka. I don’t drink vodka and it overwhelmed me.”

Some reports suggested that Podporin objected to the painting’s content. Ivan the Terrible is a controversial figure in Russian history, and negative portrayal of tsars raises hackles as the 100th anniversary of the murder of Nicholas II and his family, who are canonised as saints in the Russian Orthodox Church, approaches in July. Both Culture Minister Vladimir Medinsky and President Vladimir Putin have said that Ivan the Terrible was far from awful and was target of a negative PR campaign by Western powers of his day. Putin said in 2017 that “we still don’t know whether he killed his son or not.” A monument honoring Ivan was put up in the city of Oryol in 2016 with local government support.

Vasily Boiko-Veliky, a dairy magnate who belongs to a breakaway fundamentalist Russian Orthodox group and believes Tsar Ivan made Russia great has waged a campaign in recent years to have the painting removed from the Tretyakov. In an interview with the newspaper Komsomolskaya Pravda he denounced Repin as “a Bolshevik” who wanted to sully the tsar and said he would pay for a lawyer for Podporin.

Ivan the Terrible and His Son Ivan was vandalised previously, in 1913, by a mentally ill iconographer. Repin was still alive and worked on its restoration. This time, said the Tretyakov, Russia’s best restorers are being called upon to consult on the painting, which has been taken down and removed from its damaged frame. Shards of glass have already been extracted from the painting.