The work holds weight in New Mexico, which has the highest rate of violent crimes against Native American women in the US 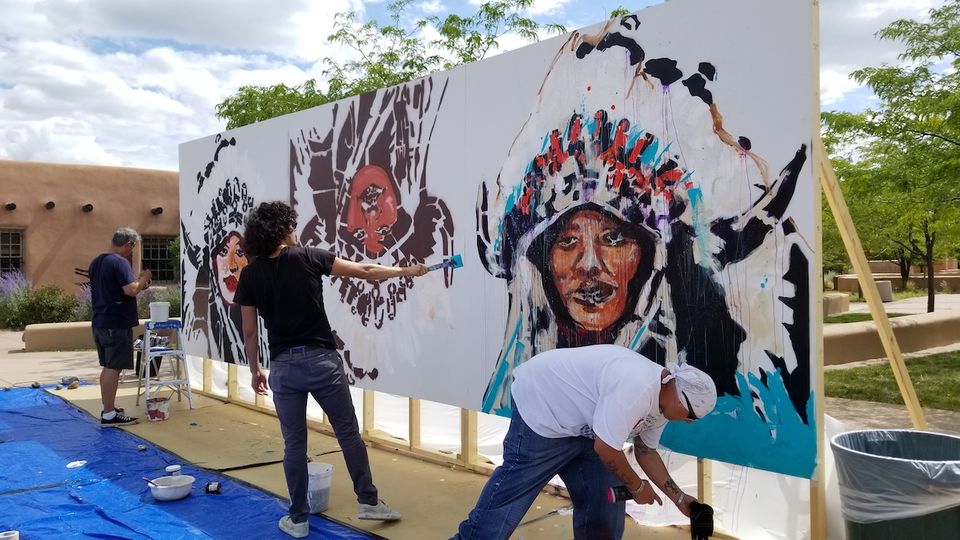 The Romero brothers' mural in progress Courtesy of the artists

The Cochiti artists and siblings Diego and Mateo Romero have painted a mural of Native American women outside Santa Fe’s Museum of Indian Arts and Culture to bring awareness to the disproportionate rates of murder and violence suffered by Indigenous women in the US. Native American women are ten times more likely than other women to be murdered, go missing or endure violent crimes, according to the US Department of Justice.

Santa Fe is “ground zero for these cases, with 78 open cases at the moment and Albuquerque being the number two city in the US for open cases”, says Mateo Romero. He adds that the project is a vehicle to “draw our line in the sand and say no more”.

The live painting on 4 August was open to the public to encourage visitors to discuss issues impacting Native American women and share their own stories with the artists. Once complete, the face of the mural was shot in a halo outline with red water-based paint by fire extinguishers.

One of the most poignant interactions of the event, says Mateo, was with the Oglala Lakota poet and activist Layli Long Soldier, who wrote a poem on the mural that “describes her female relative bound under a bridge with duct tape and plastic bags. That's what the red paint symbolises”.

“Our family has been directly touched by the loss of a female relative to this harvest of brown women,” says Mateo. “As indigenous people, we have forgotten or edited histories. This is the place we begin to try and make a change.”

The project coincides with the artists’ current show at the museum of paintings, lithographs and pottery called The Brothers Chongo: A Tragic Comedy in Two Parts, which runs until mid-October.