Museums that expand get more visitors, our data analysis shows

Museums that expanded between 2007 and 2014 saw their attendance rise significantly faster than museums that did not, according to our analysis of nearly 500 art institutions worldwide. As Tate Modern in London and the San Francisco Museum of Modern Art prepare to unveil building projects costing hundreds of millions of dollars, these results confirm what many have long suspected: if you build it, they will come. The annual attendance of expanded museums rose 14.1%, on average, compared with 10.2% for museums that did not expand—a statistically significant difference.

When Michael Govan became director of the Los Angeles County Museum of Art (Lacma) in 2006, “you could roll a bowling ball through the galleries on a weekend”, he says. “The architecture was a barrier to attendance.” After the addition of Renzo Piano-designed buildings in 2008 and 2010, the museum’s attendance grew by 81%, from 667,000 visitors in 2007 to 1.2 million in 2014.

The Perez Art Museum Miami experienced the most dramatic audience growth of any museum we examined, following the opening of its $131m waterfront facility designed by Herzog & de Meuron, which is nearly triple the size of its former home. The museum’s attendance skyrocketed by 462%, from 55,000 visitors in 2007 to 315,000 in 2014, the first year in its splashy new building.

Renovations are not always enough to override the public’s changing tastes, however. Tate Britain recorded an 18% fall in visitors (to 1.35 million) in 2014, the year after it opened a £45m refurbishment by Caruso St John Architects. Tate Modern, meanwhile, had its highest attendance ever that year. 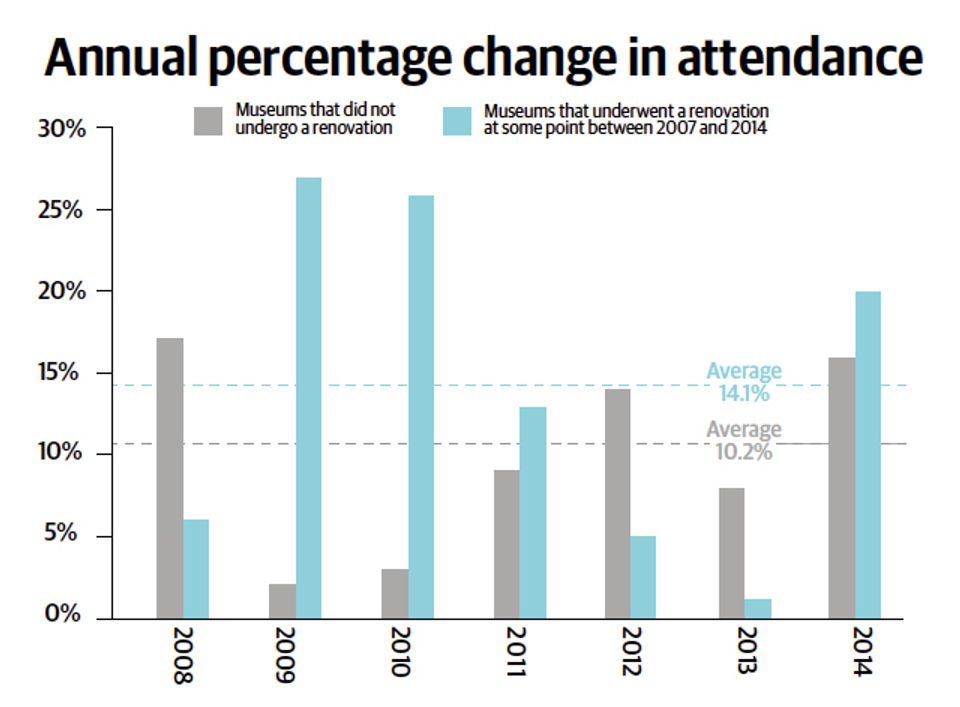 When a museum opens an extension, visitors notice. In 2012 and 2013, a number of institutions closed for renovation, which explains the dip in attendance during that time. Overall, museums that expanded attracted significantly more visitors than museums that did not.

After the sheen of newness has worn off, many museums experience a modest drop in attendance. But the vast majority continue to draw significantly more visitors than they did before their building campaigns. In 2015, Lacma attracted one million visitors, a 9% decrease on its first year post-expansion, but 40% more than pre-expansion.

Bucking the trend, the Palais de Tokyo in Paris has attracted more visitors each year since it reopened in 2012, having nearly tripled in size. In 2015, the Paris institution drew 821,000 people, 341% above its pre-expansion levels. It has also hosted more than five times as many exhibitions a year as it did pre-renovation, which is likely to keep people coming back.

Attendance is one of the only quantitative ways to judge whether a museum has succeeded in increasing its impact. As Lacma plans yet another expansion—a $600m project designed by Peter Zumthor—Govan has developed a formula. For every hundred million dollars spent on expansion, a museum should draw 100,000 to 120,000 more visitors “because of visibility and accessibility”, he says.

Museum directors say that increased attendance is often a consequence of, rather than a motivation for, expansion. They must build to accommodate growing collections, to attract new donations and to keep up with museums’ changing role in society. After many US states began to cut art education in public schools, for example, museums began to build more classrooms. (Competition among institutions is a less frequently acknowledged motivation.)

“Museums used to be built around the display of the collection; now, they realise they need to have better entrances, ticketing, lavatories,” says Charles Saumarez Smith, the chief executive of London’s Royal Academy of Arts, which is planning a £50m expansion that is due to open in 2018. “The motivation is to improve the visitor experience, which has the ancillary benefit of getting more visitors to come.”

Increased audiences bring new challenges: operating costs rise and some curators find that “a lot of their job is thinking about crowd flow”, says Tom Eccles, the director of the Center for Curatorial Studies at Bard College in upstate New York. “There are certain works of art, such as Minimalist sculpture from the 1960s, that are difficult to show in a crowded room.”

The expanding audience for art also poses a conundrum for architects, who struggle to balance the need to accommodate large numbers of people with the desire to carve out space for quiet contemplation. “When we design a museum, of course we preserve the openness and accessibility… but we also have to defend more and more the silent dialogue between the visitor and the art,” says the architect Renzo Piano, who has worked on 25 major museum projects, including the new Whitney Museum of American Art in New York. “Maybe you have to accept that sometimes you need to queue.”