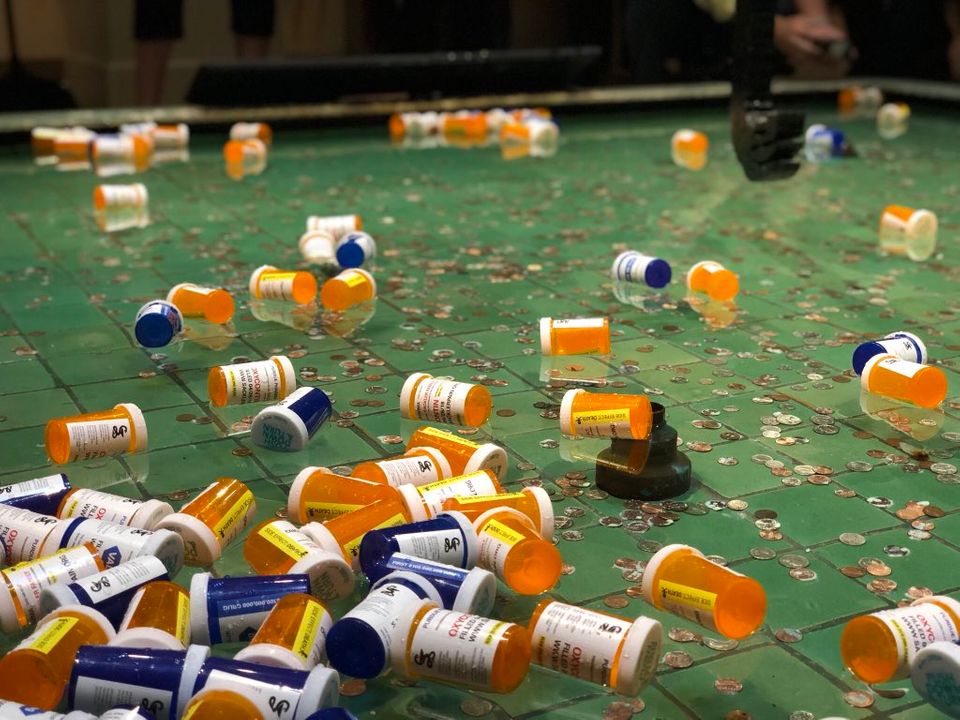 Pill bottles were thrown by protesters into a pool below a sculpture by Xu Bing at the Sackler Gallery in Washington, DC on 26 April 2018 Via Twitter @gohedgeclippers

Nan Goldin, the photographer and founder of the addiction advocacy group Pain, says a proposed bill that would pledge $100bn over a decade towards opioid treatment and education in the US is “the most promising legislation on the table”. The artist posted the comment on the group's Instagram feed while in Washington, DC on Thursday (26 April), where she participated in a Capitol Hill event to support the legislation and staged a protest at the Smithsonian Institution’s Arthur M. Sackler Gallery of Art. Earlier this month, speaking at the New York Times Center, Goldin also called on Elizabeth Sackler, whose father Arthur, with his brothers Mortimer and Raymond, built up Purdue Pharma, which produces the habit-forming painkiller OxyContin, to join her cause.

The Comprehensive Addiction Resources Emergency (Care) Act was introduced to Congress last month by the Democratic senator Elizabeth Warren and House representative Elijah Cummings. The law would streamline federal resources directly to local and state governments, and in proportion to their overdose rates free up $500m for access to the overdose reversal medication naloxone, and support biomedical research and health-worker training. At the Times Talk on 14 April, Goldin called the bill “the best thing that could possibly happen” and said funding “will get directly to the people affected, it will be [put] on the front lines, it won’t get caught up in the normal government lies,” but acknowledged that the measure faces an uphill battle in a highly partisan Congress. She appeared on Capitol Hill on Thursday with Warren, Cummings and Congresswomen Nancy Pelosi to push for the bill.

Speaking in New York to Andrew Kolodny, the director of the Physicians for Responsible Opioid Prescribing, Goldin also continued to apply pressure on members of the Sackler family of arts philanthropists. During a demonstration in the Sackler wing of the Metropolitan Museum of Art in March and on Thursday at the Arthur M. Sackler Gallery of Art in Washington, DC, Goldin shamed the family and demanded they fund opioid treatment centres. At the Times Talk, she called on Elizabeth Sackler, who is a historian and the former chair of the Brooklyn Museum, where a feminist art centre bears her name, “to meet with us to be an ally in our next demonstration”.

While expressing support for Goldin in the past, saying: “I stand with all angry voices against abuse of power that harms or compromises any and all lives”, Elizabeth Sackler has emphasised that her father, Arthur Sackler, died before OxyContin was introduced in the 1990s.

An investigative report published last month by the news non-profit ProPublica and The Atlantic magazine revealed, however, that Arthur’s estate received a nearly $20m payment from the Purdue companies just after OxyContin was approved and became a big seller. And the Elizabeth A. Sackler Center for Feminist Art at the Brooklyn Museum received a $500,000 donation to support a curatorship from the Mortimer D. Sackler Foundation, run by the heirs of the brother and also backed by money from Purdue Pharma.

Goldin has also pushed back: “The issue is not one pill that Purdue made. It’s the fact that [Arthur Sackler] was inducted into the advertising hall of fame. He was the one who created the entire advertising campaign that was used so successfully for OxyContin. And his first drug was Valium. He made the first million-dollar drug in America.”

“Arthur had nothing to do with OxyContin and his children and I have not benefited from OxyContin profits,” Jillian Sackler, Arthur’s widow, says in a statement. (Elizabeth Sackler did not respond to requests for further comment.) Adding that she had no knowledge of how OxyContin was marketed, Jillian Sackler says her husband “pioneered accurate medical advertising. I am very proud of everything he did”.

While the disagreement is likely to continue, both sides seem to agree on one thing. “I would support legislation to curtail the opioid crisis,” Jillian Sackler says.

Appeared in The Art Newspaper, 301 May 2018
More NewsTopicsopiodUSASackler family