Trust says such monuments “do not reflect, and are in fact abhorrent to, our values” 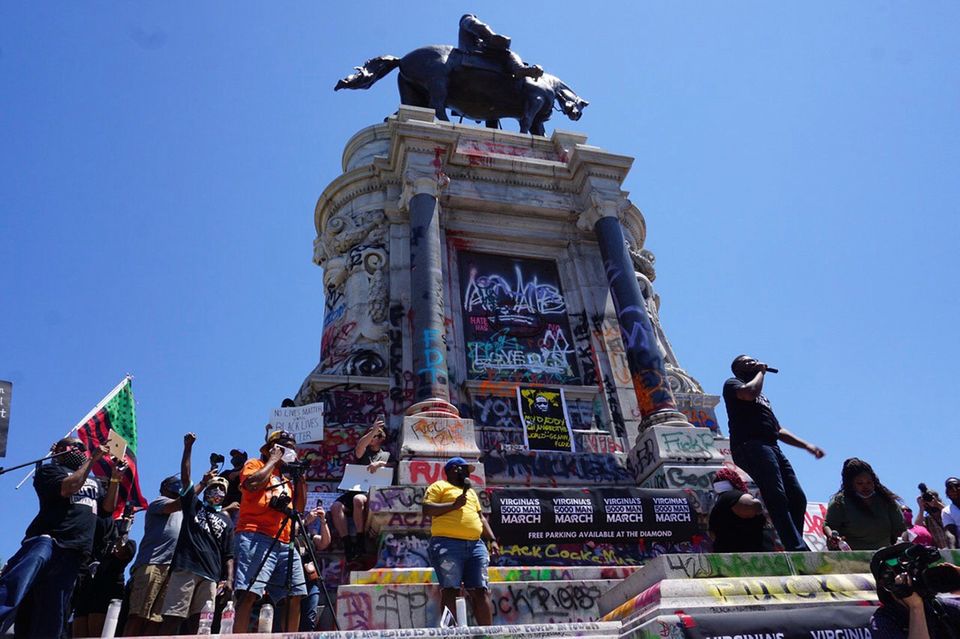 Protesters in Richmond, Virginia demonstrating against racial injustice and police brutality next to a statue of the Confederate general Robert E. Lee Artur Gabdrahmanov/Sputnik via Associated Press

Amid the growing clamour for the removal of Confederate statues in the US, the National Trust for Historic Preservation has clarified its position on the issue, saying that it supports taking the monuments down if they are interpreted as glorifying white supremacy.

“Although Confederate monuments are sometimes designated as historic, and while many were erected more than a century ago, the National Trust supports their removal from our public spaces when they continue to serve the purposes for which many were built—to glorify, promote, and reinforce white supremacy, overtly or implicitly,” the trust says in a statement. “While some have suggested that removal may result in erasing history, we believe that removal may be necessary to achieve the greater good of ensuring racial justice and equality.”

“We believe it is past time for us, as a nation, to acknowledge that these symbols do not reflect, and are in fact abhorrent to, our values and to our foundational obligation to continue building a more perfect union that embodies equality and justice for all.”

In the weeks since the killing of George Floyd at the hands of police officers in Minneapolis, protesters against racial injustice have toppled and vandalised statues portraying prominent figures in the Confederacy in American towns and cities, and government authorities have also taken steps to remove them. Statues depicting figures associated with injustices against indigenous peoples have also been targeted.

The trust emphasises that Confederate statues need not be destroyed but can instead serve a meaningful purpose. “Their history needs not end with their removal,” it says; “we support relocation of these monuments to museums or other places where they may be preserved so that their history as elements of Jim Crow and racial injustice can be recognised and interpreted.”

“We recognise that not all monuments are the same, and a number of communities have carefully and methodically determined that some monuments should be removed and others retained but contextualised with educational markers or other monuments designed to counter the false narrative and racist ideology that they represent, providing a deeper understanding of their message and their purpose,” the trust says. “We also recognise that some state legislatures have prohibited removal of such monuments, disallowing the rights of local communities wishing to remove these offensive symbols.

“Until such state laws are changed or overturned, contextualisation may be the only option, at least for the present,” it adds.

The organisation also says that it emphatically supports the ongoing protests for racial equity. “The National Trust stands committed to support this fight for justice,” it says. “We believe that Black Lives Matter, Black History Matters, and that historic preservation has a powerful role to play in telling the full story of our often-difficult history.”

On Thursday, US House Speaker Nancy Pelosi took decisive action against historic symbols of racism on the Capitol grounds, ordering the removal of large portraits of four past House speakers who served the Confederacy. The California Democrat invoked Juneteenth, today’s national commemoration of the end of slavery in the United States.

The portraits, which had long been displayed in the speaker’s lobby outside the House chamber, were quickly removed by workers who mounted ladders and were then transported to a storage area.

“As I have said before, the halls of Congress are the very heart of our democracy,” Ms. Pelosi wrote in a letter to Cheryl L. Johnson, the House clerk, requesting the removal of the portraits. “There is no room in the hallowed halls of Congress or in any place of honour for memorialising men who embody the violent bigotry and grotesque racism of the Confederacy.”

Pelosi has also advocated the removal of statues of 11 Confederate leaders, officials and soldiers from the Capitol, among them monuments depicting Jefferson Davis, the president of the Confederacy, and Alexander Stephens, the vice president. But a Senate bill calling for their removal was blocked on Thursday by Roy Blunt, a Missouri Republican who chairs the chamber’s Rules Committee.

Senator Cory Booker, a New Jersey Democrat, and Senator Chuck Schumer, the New York Democrat who leads the Senate minority, had advanced a motion for unanimous consent on a bill to remove the 11 statues. “The continued presence of these statues in the halls is an affront to African Americans and the ideals of our nation," Booker was quoted as saying in news reports.

Blunt countered that the decision was a “complicated” one involving agreements with the states and that he would further study the legislation.

‘Each employee is very important’: Embattled director of Detroit Institute of Arts responds to findings about management missteps

‘Each employee is very important’: Embattled director of Detroit Institute of Arts responds to findings about management missteps