The rare 1940 issue, which marks the first appearance of the Joker and Catwoman, is the second most expensive comic book ever sold 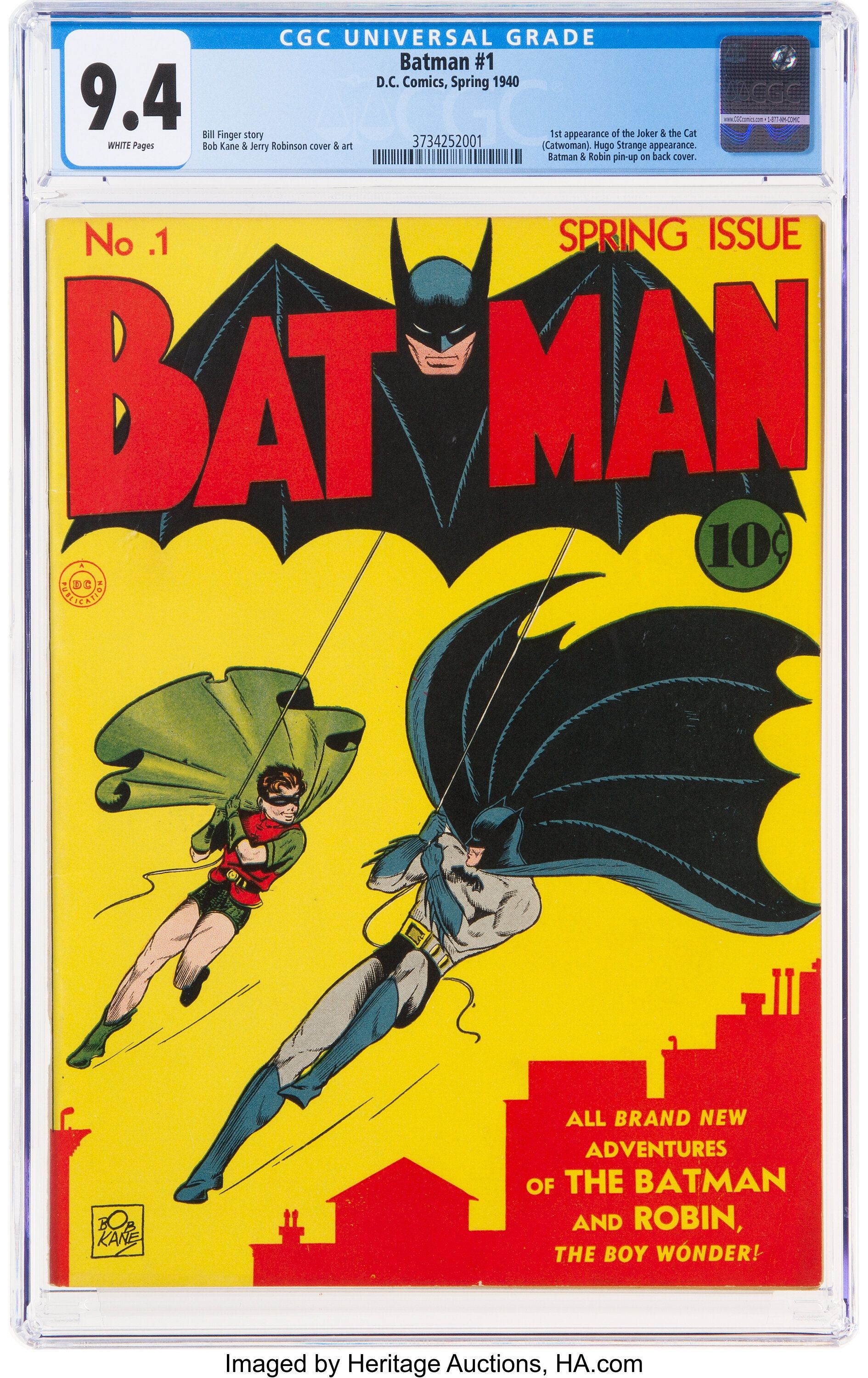 This copy of Batman #1 (1940), written by Bill Finger and drawn by Bob Kane, with art assistance from Jerry Robinson and Sheldon Moldoff, sold for $2.22m at Heritage Auctions

A near mint copy of Batman #1 from 1940 sold at Heritage Auctions in Dallas on Thursday for $2.22m including buyer’s premium, setting a world record for a comic book based on the character and becoming the second most expensive comic book ever sold at auction. The top spot in the comics market remains a pristine issue of Action Comics #1, featuring the first appearance of Superman, which sold in 2014 for $3.2m on eBay.

The rare edition of Batman #1, which gives the origin story of the caped crusader, features a striking cover drawn by comic art legend Bob Kane depicting Batman and his sidekick Robin swinging into action. It also marks the first appearance of some of the vigilante hero's best known foes—the Joker and Catwoman (called just the Cat at that point). And it is the only copy to ever receive a 9.4 grade from the Certified Guaranty Company, reflecting its well-preserved condition, with clean white pages, and collectible value. "When we value a comic book, there are certain things we look at," says Ed Jaster, the senior vice president at Heritage. "And this copy of Batman #1 is a 10 on all those metrics."

"I mean, if you have any inkling of comic books, and comic book history, and American pop culture, Batman resonates. So he's a 10 there," Jaster adds. "It's a number one issue, it's the first issue to feature exclusively Batman stories. And the eye appeal, just the aesthetics—dynamic cover, it's yellow and red, bold primary colours. You flip it over, there's a pinup of Batman and Robin. This book is a 10 out of 10 on virtually any metric you could measure this by."

Even before the live sale opened on Thursday, the start of Heritage's four-day Comics and Comic Art event (until 17 January), online pre-bidding for the comic book had shot up to $1.95m. Its sale for $2.22m, to a US bidder on the auction house's online HA Live platform, knocked out the previous Batman record holder, a copy of 1939's Detective Comics #27, which introduced the character to the world and sold for $1.5m at Heritage this past November.

Batman #1 came from the collection of the Houston-based father and son comic book dealers Billy and William Giles. Billy bought it from the owner of Camelot Bookstore for $3,000 cash in 1982, after it failed to find a buyer for the advertised $5,000 price-tag. "Dad would have been glad his story is being told—ecstatic, really. What he did to get that book and how he took care of it,” William says. “He always knew it was the finest and would have been so happy it has been recognised as the very best. So I am thrilled that I can use it to honor my father. Sure, I am a little sad seeing the book go. But I wish the new owner the best and hope he or she enjoys it as much as I have."

• To listen to Heritage Auction senior vice president Ed Jaster speak with Helen Stoilas, The Art Newspaper’s Editor, Americas (and an avid comic book reader) about the sale of Batman #1 and the comics market, tune in to our podcast The Week in Art this Friday