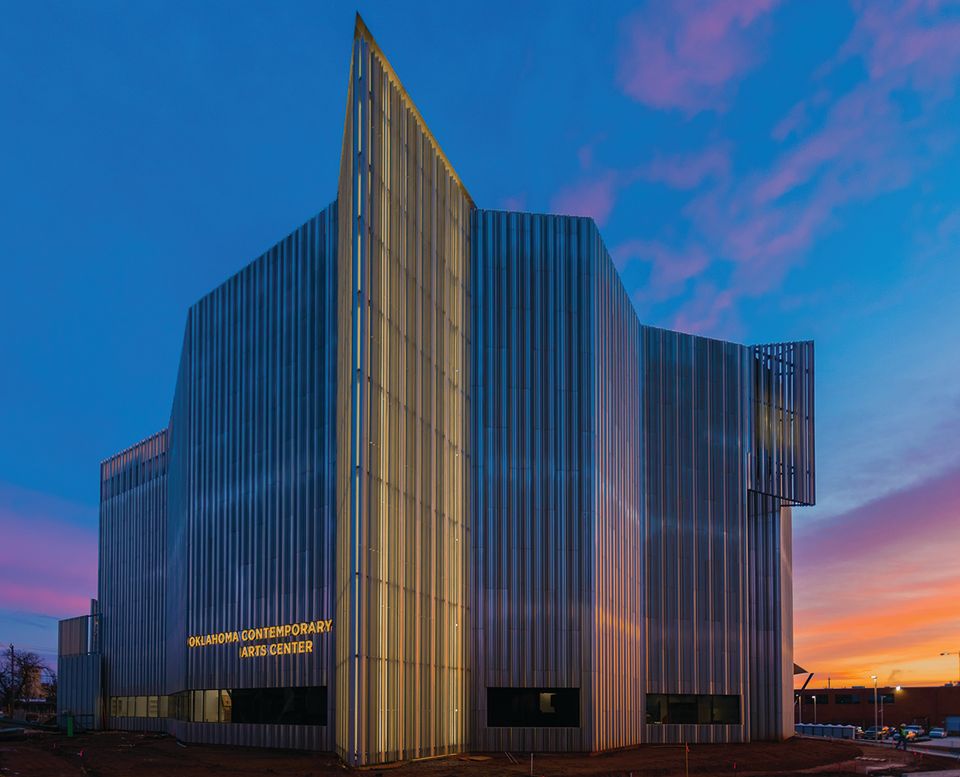 Oklahoma Contemporary Arts Center, the state’s leading exhibition space for the art of today, will reopen on Thursday in a 54,000 sq. ft building with a luminous facade consisting of ­aluminium fins that capitalise on the city’s atmospheric light and skies.

Designed by the Oklahoma City firm Rand Elliott Architects, the building devotes 8,000 sq. ft to gallery space and includes a theatre seating 200, a dance studio, nine classroom studios, a café and shops. The 4.6-acre downtown site also features a sculpture garden, an art park and a renovated 9,800 sq. ft warehouse that will house studios for ceramics, photography, fibre art, and sculpting in metal and wood.

The institution, devoted to art education and performances as well as exhibitions, raised $22.1m through a capital campaign to finance the new building. Admission to exhibitions will be free, as it was at the museum’s previous building, which closed last May at State Fair Park.

Its inaugural show will also be keyed to the theme of illumination, exploring the ways in which artists including James Turrell, Robert Irwin, Olafur Eliasson, Leo Villareal and Vija Celmins explore light in their work. Titled ­­Bright Golden Haze (13 March-10 August), the show borrows its title from the first line in the opening song of the Rodgers and Hammerstein musical Oklahoma. A smaller exhibition on a similar theme, Shadow on the Glare (13 March-6 July), will feature photography and video works.

“Rand Elliott designed the new building, nicknamed ‘Folding Light’, to respond to the expansive and ever-changing Oklahoma sky,” says Jennifer Scanlan, the arts centre’s curatorial and exhibitions director. “We’ll use the building as the first piece [in Bright Golden Haze] to get visitors to think about the way light defines and changes environments.”