Church is latest example of symbiosis between church and military patriotism 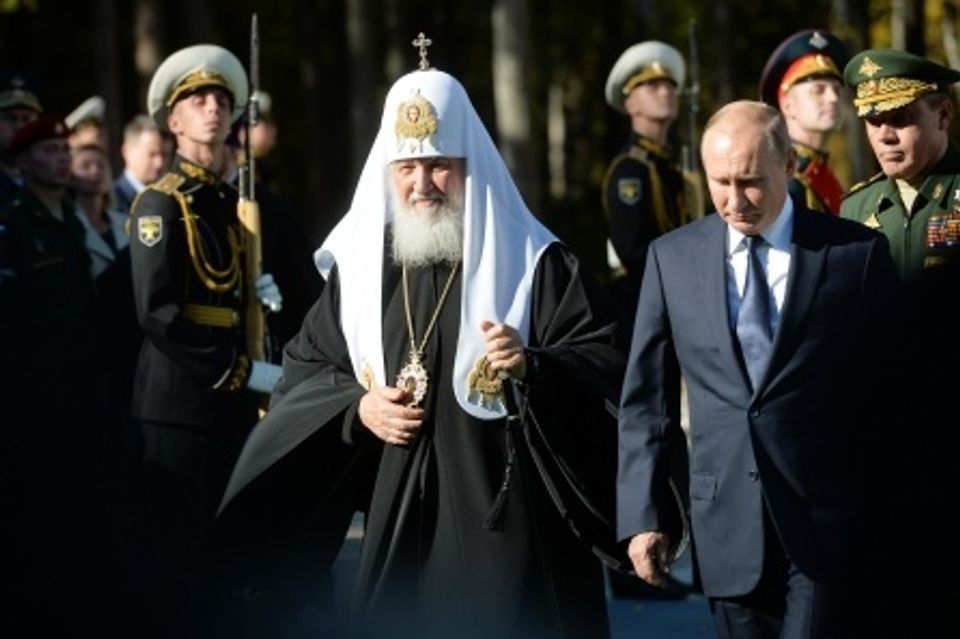 A huge glass and camouflage green cathedral dedicated to Christ’s Resurrection and the Soviet victory over Nazi Germany is being built at Patriot Park, a venue run by Russia’s Defence Ministry in a forest near Moscow that is used for arms shows and patriotic rallies.

Last month President Vladimir Putin and Patriarch Kirill I of the Russian Orthodox Church led the consecration of the cornerstone of the church, which is to be built in the Russo-Byzantine style.

During a tour of the site, Putin met with Vassily Nesterenko, the artist in charge of frescoes for the new church. Nesterenko, who worked on frescoes and icons for Moscow’s Christ the Savior Cathedral, which was reconstructed in the 1990s, told Putin that the first fresco would be called “The Return of Crimea.” Others will be devoted to Soviet and Russian military operations in Vietnam, Angola, Afghanistan, Chechnya and Syria, the Kommersant newspaper reported. Nesterenko is best known lately for monumental paintings that depict Russian troops saving Syria from ruin.

Plans to build the church were announced just two weeks earlier, on 4 September, by Sergei Shoigu, the defence minister. The church is to be built by 2020, in time for the 75th anniversary of victory in the Second World War, and will be devoted to that theme.

“It will become the main cathedral of the armed forces, yet another symbol of our unflinching national traditions and our loyalty to the memory of our ancestors and their accomplishments for the benefit of the fatherland,” Putin said.

After the ceremony Putin visited Patriot Park’s Kalashnikov shooting range and shot from a sniper rifle.

Estimates of the Soviet Union’s losses, both military and civilian, in the Second World War, range from 20 million to 40 millon people. The war effort is promoted by both the Kremlin and the Russian Orthodox Church as one of the most sacred events in Russian history and has become central to the close ties between the two institutions.

According to the official Tass news agency, the new church “will become a spiritual, learning and teaching and educational center” that will also include “an exhibition devoted to the history of the establishment of the Russian state and armed forces”.

The Russian Orthodox Church is now used, as it was in czarist times, to promote the patriotism of the armed forces. Some of Russia’s main churches are devoted to military themes, such as the Cathedral of Christ the Savior in Moscow, originally built to commemorate Russia’s 1812 campaign against Napoleon’s invasion, and the Kronstadt Naval Cathedral near St. Petersburg.

“Icons of the holy protectors of Russian warriors as well as blazonry” will be located in the new church,” Tass quoted Col. Gen. Kartapolov as saying at the 4 September meeting with Shoigu. “The main church will be decorated with frescoes of battle scenes from military history and scriptural texts.”

The church’s altars will be dedicated to the patron saints of Russia’s military, including the Prophet Elijah for the aerospace and airborne troops and St. Barbara the Great Martyr for the strategic missile forces.

Kartapolov said the church would be 95 meters tall and would accommodate up to 6,000 people.

Shoigu said that construction would be funded by voluntary contributions. A foundation called “Resurrection” has been created to coordinate funding, and the Defence Ministry has launched a website devoted to the project, hram.mil.ru, that includes a video rendering of the church.

Sergei Chapnin, a former editor of the Journal of the Moscow Patriarchate who was fired for his increasingly dissident stance, including on the militarism of the church, told The Art Newspaper that “the design of the church fully corresponds to the understanding of the Orthodox Church that has taken shape today among government and military officials”.