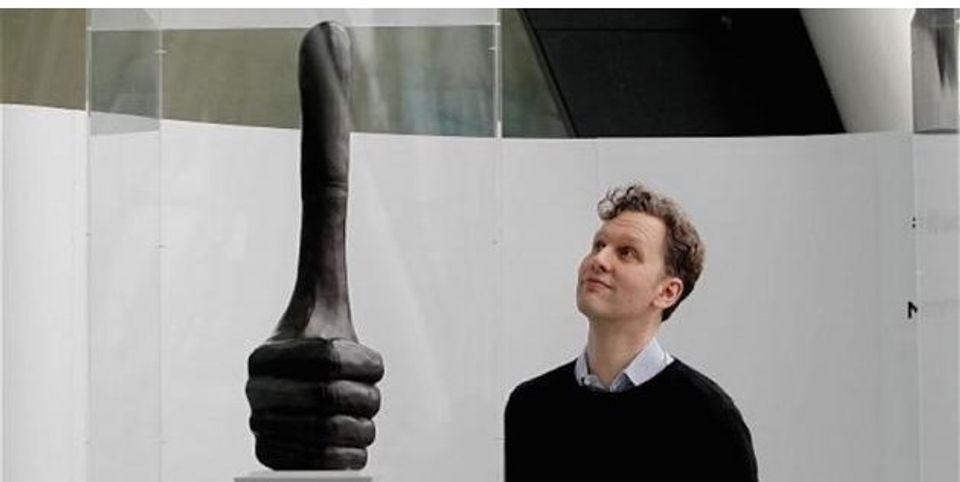 The Macclesfield-born artist David Shrigley, known for his deadpan drawings and irreverent take on everyday existence, has been awarded an OBE (Officer of the Order of the British Empire) in the Queen’s New Year UK Honours list for 2020. In 2016, he unveiled his humongous piece, Really Good on Trafalgar Square’s Fourth Plinth, showing a hand giving a thumbs up.

Ann Gallagher, former director of collection, British art at Tate, who organised a raft of exhibitions there including a show of Damien Hirst’s works in 2012, also receives an OBE.

Steve McQueen, who recently unveiled his primary school portrait series at Tate Britain (Year 3, until 3 May 2020), gets a knighthood. The Oscar winner “is recognised for his outstanding and sustained contribution to the arts and film industries”. McQueen, who won the Turner Prize in 1999, is already a CBE (Commander of the Order of the British Empire); his knighthood was given by the Foreign & Commonwealth Office.

An exhibition of McQueen’s new and recent works is due to open at Tate Modern next year (13 February-11 May). The show will feature 14 major pieces encompassing film, photography and sculpture, including his first film shot on a Super 8 camera, Exodus (1992/97), and the recent End Credits (2012–ongoing).

The following arts figures received an OBE in a list noticeably low on awards for people in the culture sector: Philip Long, the director of the Victoria & Albert Museum in Dundee; Lesley Knox, former chair of the V&A Dundee, and Tim Marlow, the new chief executive and director of London’s Design Museum. Paul Ramsbottom, the chief executive of the Wolfson foundation which supports museums and galleries, also received an OBE. The graphic designer Peter Saville, who created album covers for Joy Division and New Order, was made a CBE.

Meanwhile, the late artist LS Lowry refused five honours in his lifetime, including a knighthood in 1968.

UPDATE: The ceramicist, professor Magdalene Odundo (already an OBE), was made a dame. More than 50 of Odundo's vessels were shown at Hepworth Wakefield earlier this year. Also, Eyal Weizman, professor of Spatial and Visual Cultures and founding director of the Centre for Research Architecture at Goldsmiths, University of London, was made an MBE (Member of the Order of the British Empire). In 2010 he founded the research agency Forensic Architecture which was nominated for the Turner Prize in 2018. Marilyn Scott, director of The Lightbox gallery in Woking, was also given an MBE.