A huge forest of scaffolding, fused by the fire in April, has to be cut away 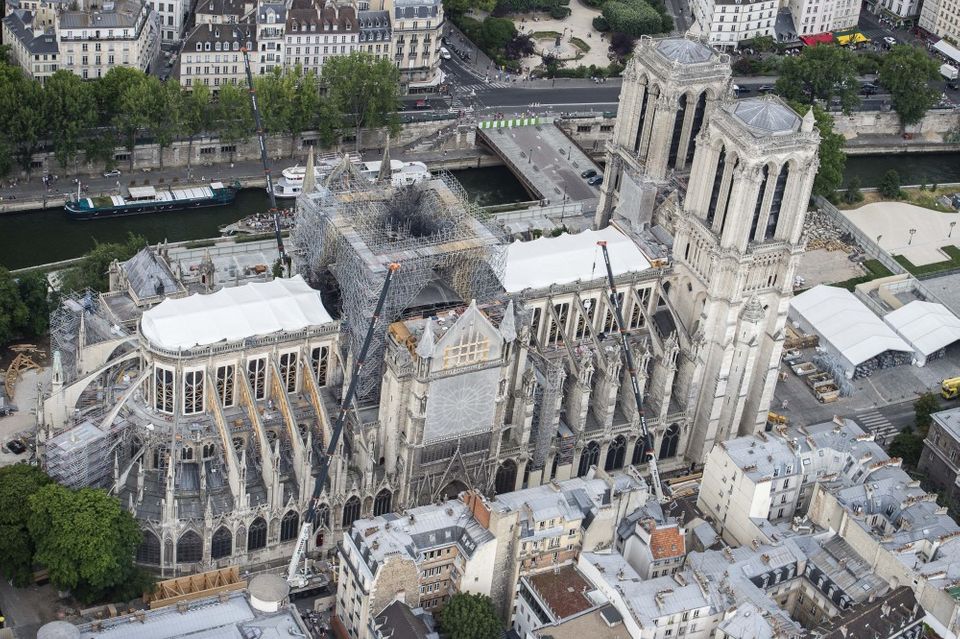 Notre Dame as it is today, with the scaffolding over the crossing © The Catholic Universe

The restoration of the cathedral of Notre Dame in Paris, which was badly damaged by fire on 15 April, has entered a new and delicate phase. This involves removing a vast and heavy scaffolding structure at roof level that became fused by the intense heat. It had been erected before the fire in order to carry out restoration work on the 19th-century roof spire, whose dramatic collapse was seen on screens around the world.

The removal of the scaffolding requires three levels of steel beams to be positioned around its exterior to form a stabilising “belt”. Once this operation is complete, the same firm that built the scaffolding (Europe Echafaudage) will start to dismantle it, using telescopic crawler cranes that will allow roped technicians to descend into the forest of pipes and gradually cut them away after having coated them with a protective layer to avoid spreading the pollution caused by the melting of the lead roof. Work is expected to be complete next April. 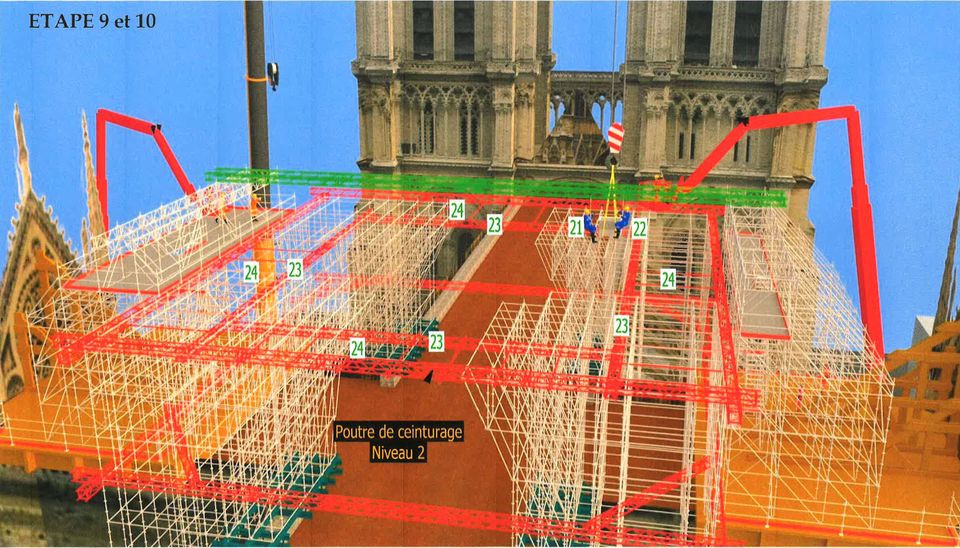 This and all future work will be taking place under the new management in place since 29 November. This special agency, established by a law passed last summer, is presided over by General Jean-Louis Georgelin, assisted by his deputy, Philippe Jost.

It has the task of overseeing the whole project, conducting technical studies, managing the tendering and fundraising processes, looking after the areas surrounding the cathedral, ensuring full accountability and transparency of funding, and providing technical and scientific information to the public during the course of the restoration. 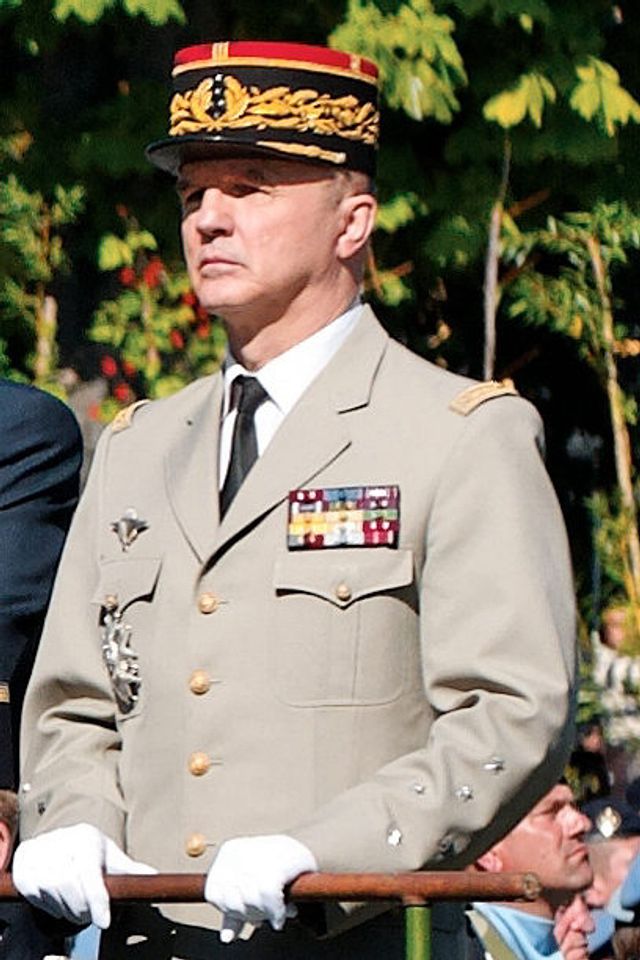 Its board includes six representatives of the government, the mayor and archbishop of Paris, and three high-level specialists. It is assisted by audit, fundraising and scientific committees. The ministry of culture maintains its role in the supervision and design of the restoration through its offices and the technical services of the architect-in-chief of the cathedral, Philippe Villeneuve, who managed the initial restoration.

This change in management comes at an important point in the restoration process. While the activities conducted since the fire that destroyed the roof of Notre Dame have allowed the building’s structure to be reinforced, the overall process has been entangled in a bureaucratic web that has significantly slowed down the work planned by the architects in charge.

Part of this delay is due to the fear that lead released during the fire has polluted the site and surrounding areas. This prompted the establishment of very strict—some say excessive—safety measures to protect the health of the workers, which have, however, caused great alarm in the neighbourhood.

All 28 flying buttresses have been reinforced by the installation of temporary structural supports. This has been necessary in order to prevent the possible collapse of the side walls in case of a failure of the vaults.

The supports will also allow the restoration and/or replacement of five or six flying buttresses that are very fragile (in fact, several of them have already been replaced since the 19th-century restoration). The measurements taken so far in various parts of the building have provided encouraging results, indicating that the overall structural system is stable.

The north transept vaulting is sound, the nave and choir have yet to be tested

The vaulting of the north transept has proved to be structurally sound. It was protected by a layer of plaster and the fact that the roof beams of the two transepts dated from the 19th century and were much lighter than those of the nave’s medieval roof may have helped contain any damage.

The state of the nave vaulting will now be assessed, and to speed this up, two temporary sliding roofs (parapluies roulants), one for the nave and one for the choir, will be installed over the wooden platform recently positioned above the vaults. The transept crossing presents particular difficulties because this is where the roof and the vaults completely collapsed during the fire, leaving parts of the roof beams hanging. These could fall down and further damage the building. 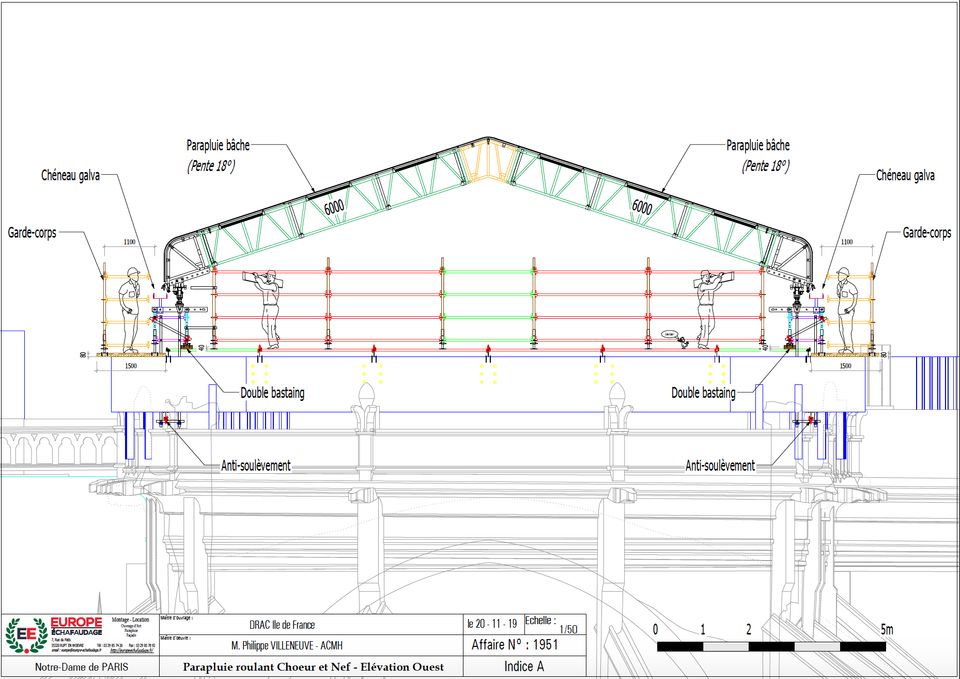 A “large umbrella” for the whole cathedral

After the removal of the scaffolding, a new temporary roof called the “grand parapluie” (large umbrella) will be built over Notre Dame (A, see below), to allow the restoration of the vaults and the reconstruction of the roof (B). This is expected to take some years. Inside the nave, the choir and the aisles, temporary scaffolding (C) will allow restoration and reconstruction work to carry on. The structural reinforcements of the buttresses (D) will remain in place until the end of the restoration process. All these very important support structures should be in place by next September. 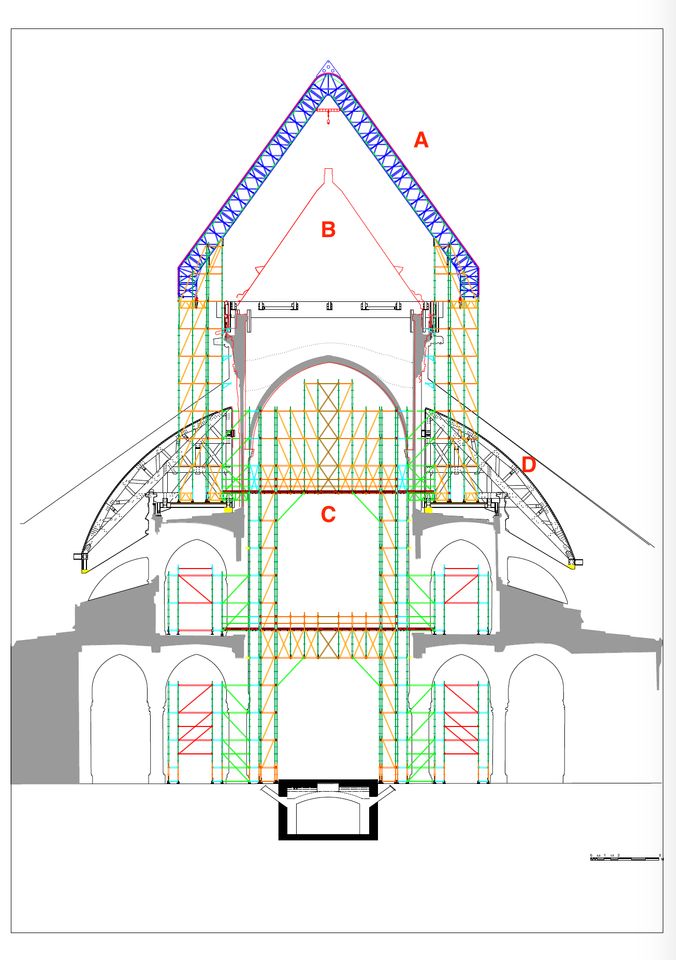 What kind of roof?

No decision has been taken so far over how to rebuild the roof. A reconstruction according to traditional techniques is clearly possible as the skills and materials (essentially, tall oak trees) are available in France. As the previous roof proved effective and resilient—it survived 800 years—this seems the most desirable solution as it would also fully respect internationally accepted conservation principles, with the addition of modern fire-monitoring and prevention technologies.

What kind of spire?

According to the conservation principles endorsed by Unesco and Icomos, the spire should be rebuilt according to traditional techniques and should reinstate the shape and character of the previous spire, which was by the architect Eugène Viollet le Duc, who carried out extensive restoration work on Notre Dame in the 19th century.

Experts agree that it would be inconceivable from a restoration point of view to use different techniques for the roof and the spire as they form a unitary architectural system, but because, in the aftermath of the disaster, a plea for an “architectural gesture” for the spire was made by President Emmanuel Macron, current discussion is focused on only one part of this system. It is certain that this debate will heat up in the coming months.

One mega-contractor or a plurality of assignments?

So far, everything has been managed according to emergency procedures, but shortly normal tendering procedures will be put in place. A choice will have to be made between a general contractor who would subcontract the work to specialised enterprises, or a plurality of assignments (by “lots”), to specialised enterprises, as is normal for architectural restoration projects in France today.

• Francesco Bandarin is an architect and former senior official at Unesco, director of its World Heritage Centre (2000- 2010) and assistant director-general for culture (2010-18). He is currently advisor to ICCROM and to the Aga Khan Trust for Culture.