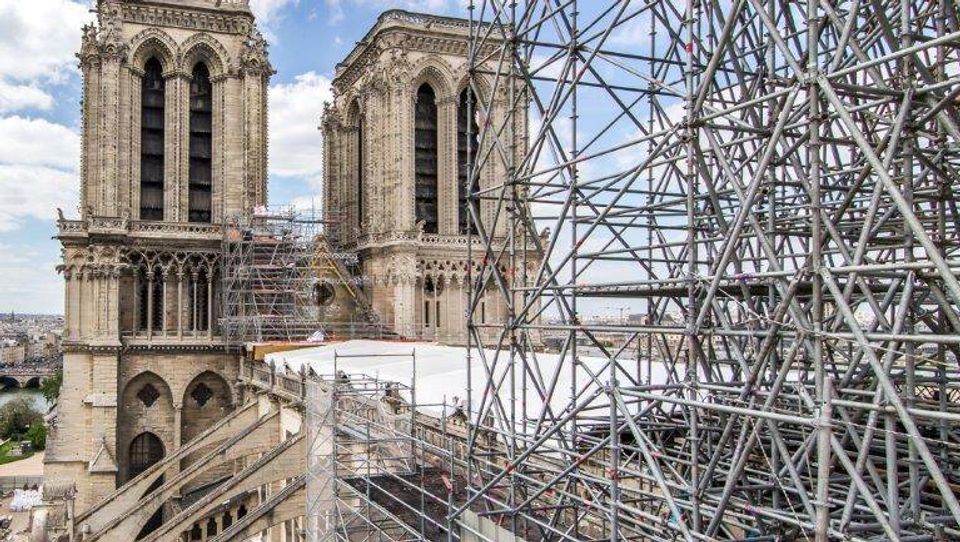 The scaffolding around the Notre Dame cathedral in Paris was erected before the fire in order to carry out restoration work Photo: Edouard Bierry / Ministère de la Culture

The reconstruction of the fire-damaged Notre Dame cathedral in Paris was halted by French authorities earlier this week until further notice because of the coronavirus pandemic.

Libération newspaper reports that the delicate operation to remove the melted scaffolding around the roof, scheduled to begin on 23 March, cannot proceed without violating “security measures relating to the coronavirus epidemic” for workers on the site. Facilities such as changing rooms and decontamination kits linked to the presence of lead dust, for instance, do not comply with the coronavirus measures.

The team of around 100 people working on the ruined building were initially finalising preparations to remove the scaffolding; technicians were due to enter the shell of the building by rope and cut the metal tubing, which had welded together in the heat of the fire that broke out on 15 April last year.

The scaffolding was erected before the fire in order to carry out restoration work on the 19th-century roof spire, whose dramatic collapse was seen on screens around the world. A special agency presided over by General Jean-Louis Georgelin is overseeing the entire reconstruction project; The Art Newspaper understands that agency staff are now mainly working from home.