From Iranian "vase" carpets to a rare figurative Iznik dish, here's our pick of this week's auction highlights

Three previously unpublished, 17th-century Safavid “vase” carpets, from the collection of Alice de Rothschild, are on the market for the first time in more than a century. Each of them is different in design, showing the extraordinary accomplishment of the south Iranian Kirman weavers. The designs, which often, but not always, feature vases, are characterised by their immense vitality, range of colours and great sophistication. The individual design elements remain mostly within the standard Safavid repertoire—curving saz leaves, fantastic flower heads and birds—but are singly emphasised to great effect. This three-metre by two-metre fragment comes from the upper short edge of a carpet measuring possibly 16m long. And the profusion of enormous flower heads, rendered in more than 14 natural dyes, is contained within a symmetrical framework. To have stood on the original carpet, surrounded by 96 sq. m of such exuberance, must have been mesmerising. 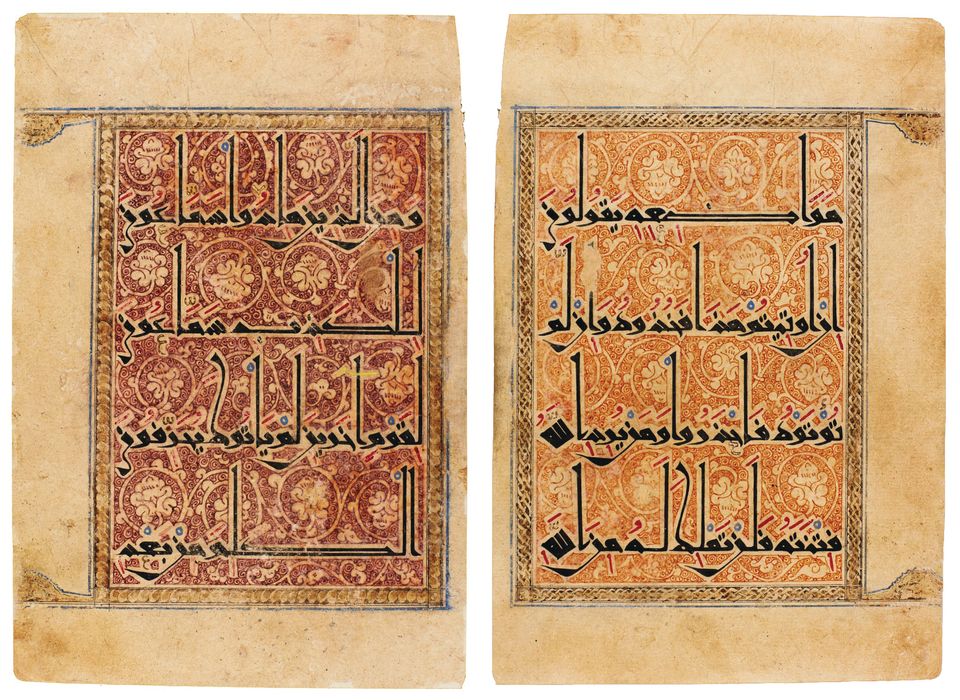 This leaf from a well-known, beautifully decorated Qur’an in Eastern Kufic script is perhaps the best of the six that have appeared at auction in the past 40 years. In a private UK collection for several decades, the leaf comes from the same sixth juz’ or section of the Qur’an as the others. This Qur’an, which is believed to have been produced in Persia or Central Asia between 1075 and 1125, was probably dispersed in the first half of the 20th century. Not only is the page in good condition, but the background floral scrolls on either side are unusually in different colours. These backgrounds, uniquely, decorate every folio of the entire Qur’an, ranging from red, yellow and dark brown to a striking light blue. Offset against this is the superb calligraphy, one of the finest examples of Eastern kufic. Angular geometric order and unusually exaggerated tall and short letters are combined with an unexpected lightness of touch. Yet the manuscript’s original patron remains tantalisingly unknown. 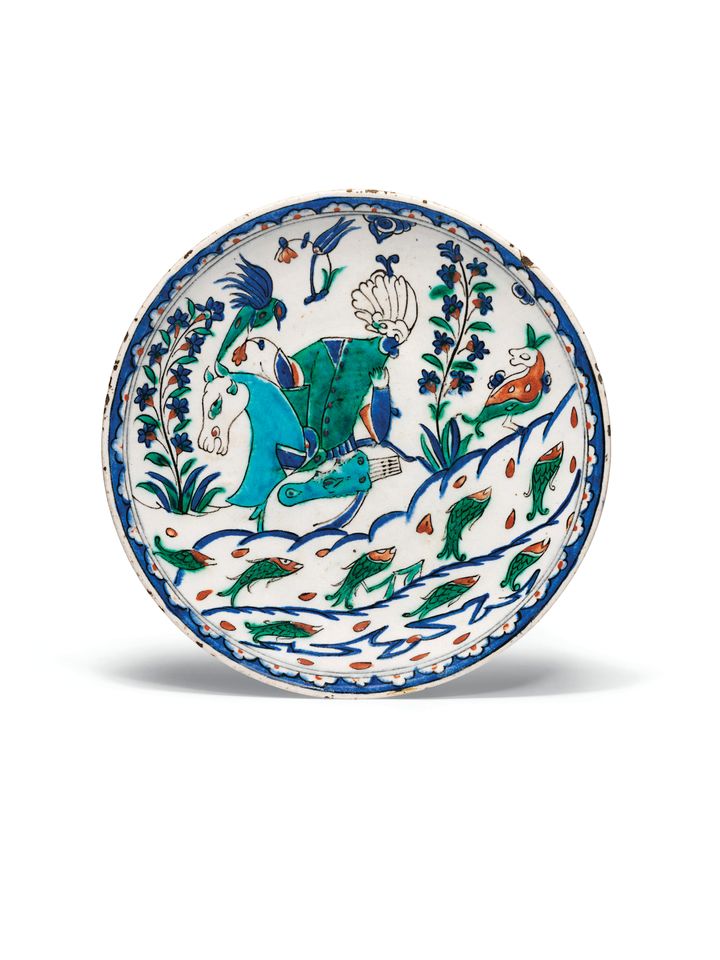 16th-century Iznik dish with a rider by a stream Art of the Islamic and Indian Worlds, Christie’s, London, 21 April

A rare Iznik (Turkish) dish dating to around 1570 and showing a turbaned rider by a stream is a reminder of how much there is still to discover in the Islamic art world. One of the few 16th-century Iznik dishes to be decorated with a human figure, its engaging and lively, but slightly erratic, drawing is at odds with the more precise draughtsmanship and floral decoration generally found on classic Iznik ceramics. The atypical design of this bowl is especially puzzling as 16th- and 17th-century Iznik ceramics have been well studied and pieces can often confidently be dated to a specific decade. The zig-zagging blue line that links the bowl to two other known pieces, similar in that detail alone, provides no real answers. Was this a shaky experiment in a new style or an attempt to remedy a mistake? A burst of fun by a high-spirited artist or the trace of a genre that failed to survive? Such questions merely add to the bowl’s appeal.