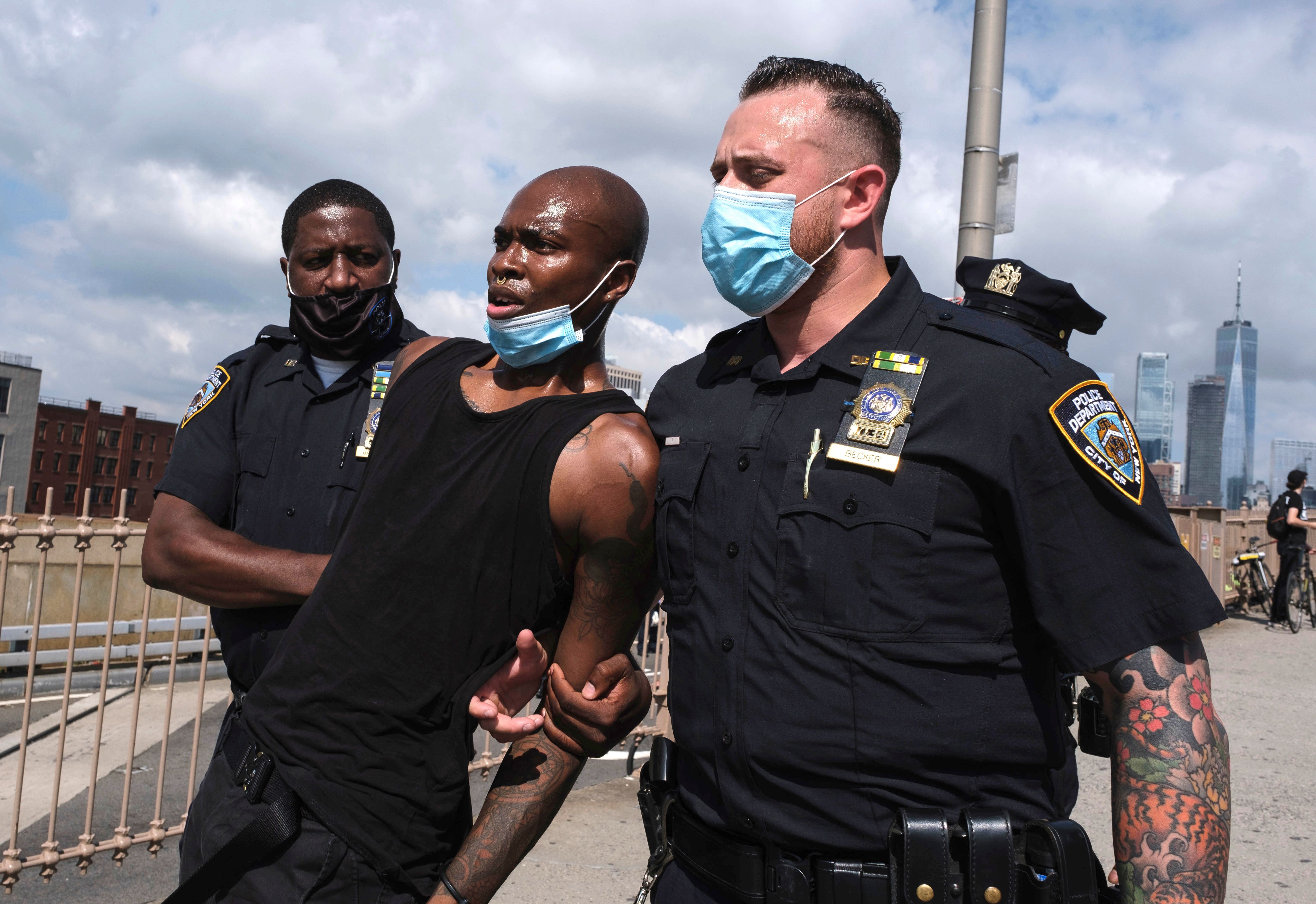 Officers arrest a photographer on Brooklyn Bridge during a clash between officers and Black Lives Matter protesters in July. Yuki Iwamura/AP/Shutterstock

As protests against social injustice and rallies for civil liberties continue across the US for the fifth month straight, photographers have been working to document the seemingly endless chaos popping up throughout the nation. The stories from these frontlines are invaluable to understanding this unprecedented cultural moment, yet some photographers are finding their livelihoods increasingly undervalued—and their labour underpaid—as they are being asked to risk their lives.

“If I was going to die from protesting, I would much rather it be from a pandemic than a police officer, right? But either way, my life is in danger,” says OJ Slaughter, a fine arts photographer based in Boston, Massachusetts, whose images of the Black Lives Matter protests have been published in The Boston Globe and the radio station WBUR.

At Black Lives Matter protests especially, stories about journalists getting injured by rubber bullets or tear gas, or getting arrested, are almost commonplace. “I’m a black, queer person and my life is on the line even when I just go to the grocery store. So there was really no difference in safety for me,” Slaughter says of their decision to cover the events.

What has changed, however, is the mental toll the job is taking, for which there is little to any recouping payment. To address this issue, Slaughter recently made a zine of their photographic work for a local art periodical, Boston Art Review, and in it included a loose “invoice” tucked within the pages of the magazine. Billed to “The American Public For Reparations”, line items include “Traumatizing Myself Per Protest Featured in Zine”, for which Slaughter estimated a $2,000 cost. For “Emotional Labor Per Protest”, $3,000. And for “Repairing the Racial Wealth Gap”, $31,000—a sum that came from a Boston Globe study on income inequities for black Bostonians. Slaughter shared their experience of capturing Black Lives Matter protests on social media. Many photographers have been subject to counter-protestors' hate speech, police force and sometimes even arrest. Screenshot via Instagram. Courtesy of OJ Slaughter

“A while back I was thinking about how outdated the ethics of journalism are, and how it hasn’t changed in many years and was created by a series of white men in power,” Slaughter says. “I definitely don’t trust the government to make rules that would [benefit] us, but I do trust the community to stand up and do a better job of protecting one another.”

A lack of protections for and an increase in domestic dangers to photojournalists is becoming increasingly visible amid the pandemic and the protests, according to other photographers.

“It’s definitely been noticeably more hostile in the last couple of years to attend these right wing protests,” says Jamie Lee Curtis Taete, a Los Angeles-based photographer who has built his career photographing outsider political and cultural groups in America. He specifically chalked much of this phenomenon up to the Trump administration’s anti-press sentiment.

You risk an infectious disease, you risk getting shoved around by Trump people or getting arrested, so to see an image blow up like that and only make a few hundred dollars...it’s frustrating. Jamie Lee Curtis Taete

Taete’s subjects have ranged from Michael Jackson fanatics to the Westboro Baptist Church. But more recently his lens has been pointed at California’s anti-lockdown and anti-mask protests, as well as QAnon rallies—a cultish right wing group that believes the government is run by a paedophilic cabal of liberal elites. Both of these fringe groups are mostly composed of those on the radical to extreme right, who feel aligned with President Trump’s antipathy toward the press.

“There used to be more of a feeling that I could sort of blend in with the people on the [radical] right, unless they directly asked me my opinions. I wouldn’t volunteer them, so I got away with a lot,” the photographer explains. “Now that’s more difficult because the press are the only ones wearing masks at these events.”

Taete says that at the QAnon rallies he has been to, a few people have started recognising him as “some sort of George Soros Antifa spy or something”. Though he has been harassed and threatened by one rally-goer, he seems incredulous that he had not yet been physically attacked like many photographers he knows in Los Angeles.

“I’ve witnessed a lot of journalists getting either shoved or pepper-sprayed or just caught up in the violence when it erupts. I don’t know why I’ve been lucky.”

Taete’s most widely seen photo from this year is of an anti-lockdown protest, where he captured a woman shrieking outside of a Baskin Robbins ice cream shop while holding an American flag and a sign that read, “Give me liberty or give me death”. The viral image was shown on the late-night TV programme "Full Frontal with Samantha Bee" as well as used in publications such as The Washington Post and Newsweek, yet Taete reports he has only received about $300 for the image in licensing.

“It is a little frustrating, especially during Covid where I’m not working and it’s dangerous to go out,” Taete says. He faces the added risk of being in the US on a Green Card, so if he were to be arrested at a protest, it could jeopardise his citizenship status. “You risk an infectious disease, you risk getting shoved around by Trump people or getting arrested, so to see an image blow up like that and make a few hundred dollars...it’s frustrating.”

Undervaluing the work of photographers chronicling public events is common in the photography industry. Last month, the Whitney Museum of American Art was roundly criticised for the announcement of its show, Collective Actions: Artists Interventions in a Time of Change, in which numerous works were by street photographers, many of whom were Black artists who had sold their works for low or discounted prices to benefit social justice causes.  After a number of artists decried the show as exploitative, the Whitney cancelled it.

Slaughter says there is a shift needed  in how photographers are treated by those who want to use their images. “A lot of photographers are out there doing work for free just because they feel like they have to do it, and then not understanding that they have rights and that their images should be licensed,” they say. “The community owes a great deal to people who are protecting our future history.”