Ahead of Poland's ghost election earlier this month, a group of artists carried a 14-metre letter to parliament 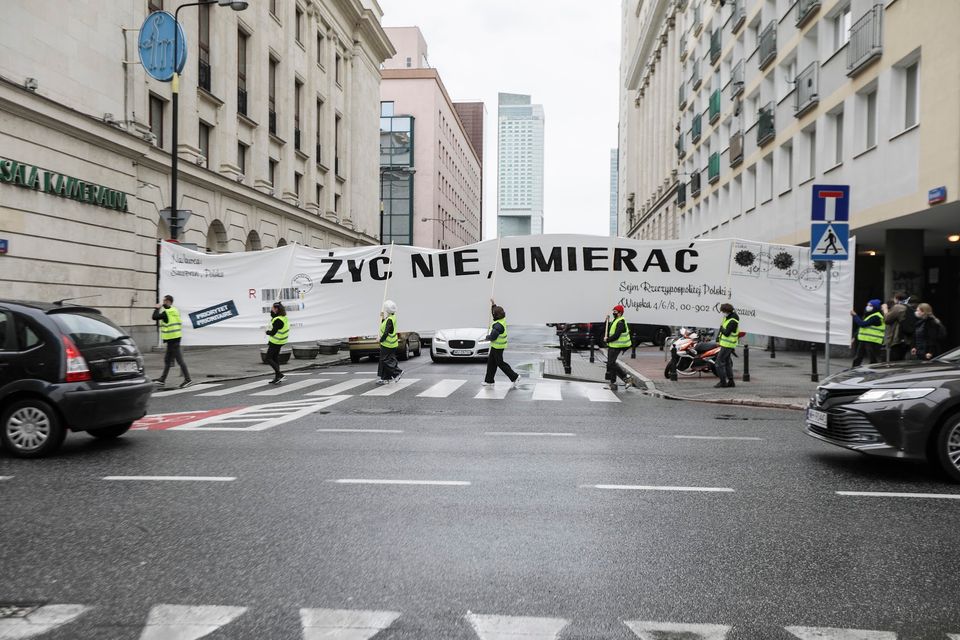 The Polish government has withdrawn two fines imposed on a group of artist who were accused of breaking social distancing rules during the Covid-19 pandemic.

On 6 May, 11 artists walked a 14-metre long letter from Warsaw’s main post office to the parliament building, two kilometres away. It was "delivered" to members of parliament ahead of a debate on whether to hold the country's presidential elections 10 May at the height of the country's lockdown (the elections were ultimately postponed until at least 28 June). The letter read, which reads Żyć nie, umierać, a word play on "life must go on".

The artists were alluding to the well-known Polish artist Tadeusz Kantor's happening from 1967, which involved seven postmen carrying a large letter to Warsaw's Foksal Gallery under military escort. Kantor's action was understood to be a statement about the lack of freedom of expression in the country.

A few days after the artists' project this month, Polish police issued fines of 10,000 zł each (around £2,000) to two of the ten participants. The penalties were imposed by the State Sanitary Inspector who charged them with failing to keep the two-meter distance required by Polish law.

However, after a massive public outcry, which included a crowd-funding campaign, city authorities made a u-turn after reviewing evidence supplied by local journalists that proved the artists had maintained the required distance.

According to one of the participants, Michał Frydrych, “the fine is a blatant act of censorship delivered under the guise of care. It mimics the type of repression used in places like Russia, Belarus and Turkey to stifle the voices of dissenting artists and activists. I'm extremely saddened that this type of censorship is making its way to Poland."

The 100,000 zł (£20,000) money raised in the crowdfunding campaign will be used to support the artists who find themselves in similar situations in the future. According to a statement published in the Polish newspaper Gazeta Wyborcza, the funds “will be donated to support all victims of censorship in Poland—artists, activists and citizens who are forbidden not only to do their work, but also to practice their civil rights - the right to freedom of speech, freedom of assembly, manifesting their views or criticising power."