Pressure mounts for US museums to increase diversity at the top

Two recent studies paint a stark picture of the lack of ethnic and racial diversity among top museum staff in the US. While people of colour represent 38% of the country’s population, they make up only 9% of museum boards and 16% of the administrators, curators, conservators and educators who make decisions about what is exhibited and preserved as culturally important. These hard numbers show just how little the offices and boardrooms of US cultural institutions reflect rapidly shifting demographics. Now, those institutions must decide what to do about it.

After surveying almost 1,000 local cultural organisations last year, the New York City Department of Cultural Affairs has committed $1m to support diversity efforts among city-subsidised institutions, ranging from the Metropolitan Museum of Art to the Bronx Historical Society. The department is now evaluating proposals such as paid internships, which help remove the barrier to entry for those who cannot afford to work for free.

The Association of Art Museum Directors (AAMD) devoted its annual meeting in May to diversity and inclusion after surveying staff at 181 museums in partnership with the Mellon Foundation last year. The survey found that only 4% of curators, educators, conservators and top administrators are African American; 6% are Asian and 3% are Hispanic. 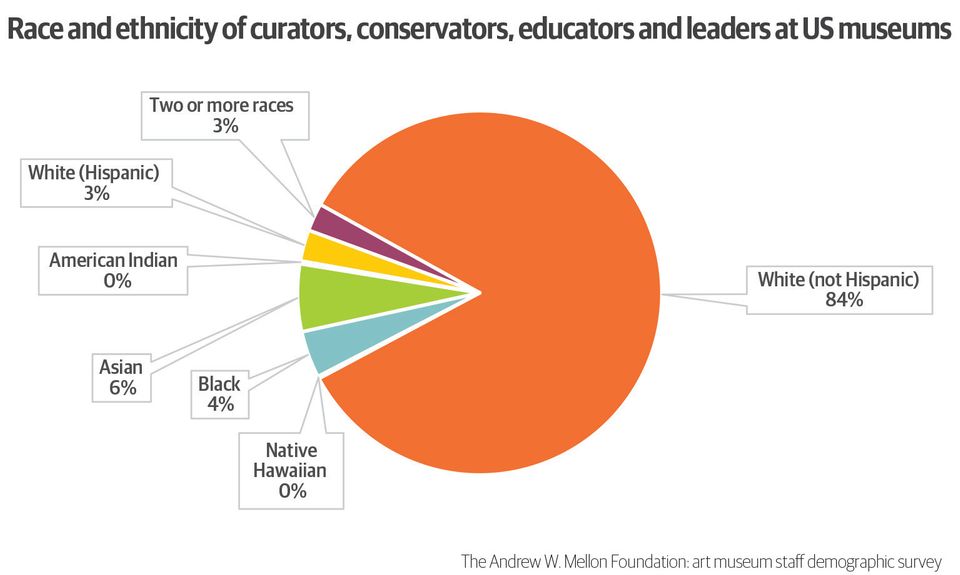 The AAMD’s conference was “almost entirely dedicated to the question of how you build institutions that have cultures of inclusive excellence, rather than thinking of diversity as some sort of deficit you have to work around in terms of quality of your programmes”, says Mariet Westermann of the Mellon Foundation. In March the foundation launched a pilot programme, with Hunter College, to expose students from under-represented groups to careers in New York City arts organisations.

Westermann says that she has felt a “sea change” in how directors approach the issue. Rod Bigelow of Crystal Bridges Museum of American Art in Arkansas, for example, recently received board endorsement to revise his title to executive director and chief diversity and inclusion officer, signalling that these are institutional values for which he takes responsibility. The museum has also set hiring targets based not on the demographics of today, but of the early 2020s.

The Walters Art Museum in Baltimore, meanwhile, announced a new initiative last week to hire diverse-owned investment firms to manage a portion of its $116m endowment.

Mission critical? The survey findings may not have surprised those already working to change the homogeneity of the museum world, but they provide a new statistical baseline to measure improvement. “Information can be a powerful agent,” says Holly Sidford of Helicon Collaborative, a consultancy that helps promote equity in cultural organisations. “This is about engaging people in a tough conversation that engenders tremendous emotion and whether cultural institutions are going to be increasingly relevant or irrelevant to future populations. Change only comes about when the organisation sees that this work is mission-critical.”

Not everyone agrees on how best to create change. The New York-based development officer Nicole Reiner says funders should invest more in struggling community organisations that are already multicultural rather than trying to diversify well-funded, mainstream institutions. According to the National Center for Charitable Statistics, the largest 2% of cultural organisations get 58% of public and private contributions.

“To simply plunk ‘diverse’ candidates into white organisations does not promote equity—it promotes tokenism,” says Reiner, who felt isolated in jobs at two of New York’s powerhouse museums and is now the director of development at the Caribbean Cultural Center African Diaspora Institute.

Some funders have opted to invest in people rather than institutions. The Ford Foundation, which has revised its mission statement to focus on “inequality in all its forms”, awarded the Studio Museum director Thelma Golden a fellowship last year to increase the visibility of curators of colour.

“We’ve been paying attention to what it means for curators to be able to rise up through the ranks,” says Elizabeth Alexander of Ford, which also helped fund New York City’s cultural diversity survey. It found that cultural organisations become less diverse towards the top: 74% of senior staff are white, compared with 55% of junior staff. 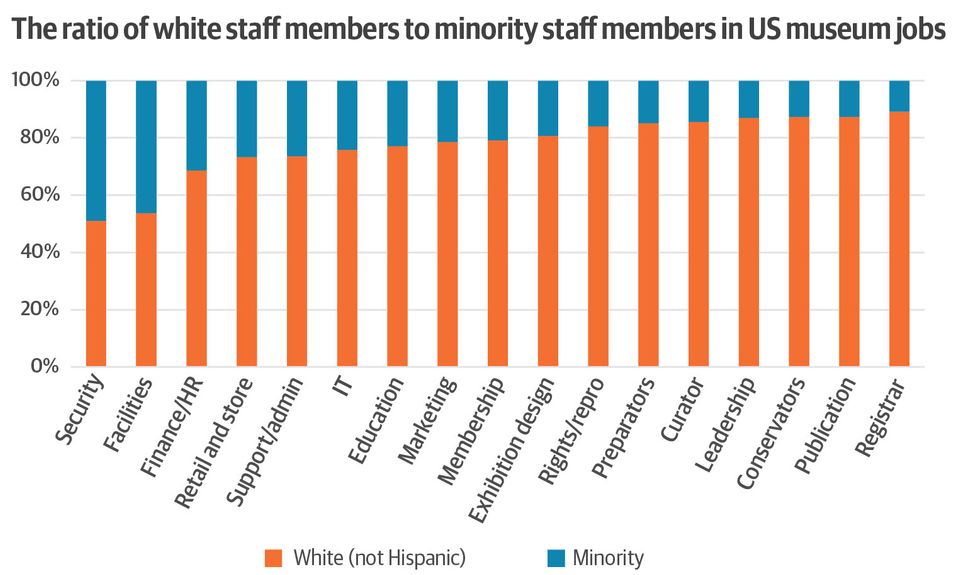 Golden has already seeded the museum world with curators who trained at the Studio Museum, including Thomas Lax, now an associate curator at the Museum of Modern Art in New York, and Naomi Beckwith, a curator at the Museum of Contemporary Art, Chicago. Nevertheless, Alexander says, “at the top level of leadership the numbers of people of colour are very low, and you don’t see them leading what we might call mainstream institutions”. Among the few who have broken through are Franklin Sirmans, who took the helm of the Pérez Art Museum Miami last year, and Belinda Tate, the executive director of the Kalamazoo Institute of Arts.

To improve the statistics at the top, Tom Finkelpearl, the commissioner of New York’s cultural affairs department, suggests museums adopt the National Football League’s Rooney Rule, which requires a diverse candidate pool to interview for every senior position.

David Rios, the director of public programmes at the Children’s Museum of Manhattan, promotes reviewing CVs more broadly. “That means not always getting a museum studies major to run my programmes, but maybe looking at someone who has a dance or theatre background,” he says. “It’s the simple idea of hiring for attitude and training for skill.”

■ Mellon Undergraduate Curatorial Fellowship: trains diverse students for museum work with major institutions including the Los Angeles County Museum of Art, the Museum of Fine Arts in Houston, the High Museum of Art in Atlanta, the Art Institute of Chicago and the Nelson-Atkins Museum in Kansas City

■ Association of Art Museum Directors/United Negro College Fund partnership: offers paid internships to introduce students to museum careers. Similar programmes for students of colour have been launched by the American Folk Art Museum, the RISD Museum and the Seattle Art Museum, among others