Susi Law Wai-shan, Clara Cheung and Wong Tin Yan ran in the elections which had an unprecedented 71.2% turnout 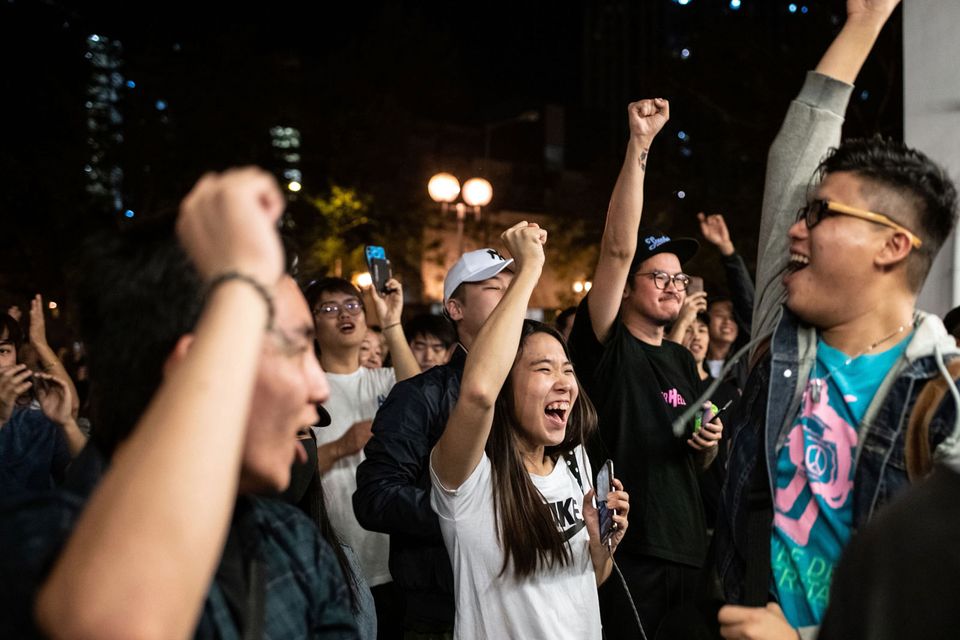 Supporters of the democracy protests had their spirits raised further today as US President Donald Trump signed the Hong Kong Human Rights and Democracy Act, passed by both houses of Congress last week, supporting the protests and banning the sale to Hong Kong of crowd control equipment such as rubber bullets and tear gas. Trump had earlier commented that he might veto the legislation to facilitate trade negotiations with the Mainland.

Elections took place peacefully, with an unprecedented 71.2% turnout, despite a heavy police presence at polling stations and an ongoing standoff between police and trapped protesters at the city’s Polytechnic University. Previously, the pro-establishment and -Beijing parties led by Democratic Alliance for the Betterment and Progress of Hong Kong (DAB) held 69.37% of the seats. Speaking ahead of the vote Cheung said the government supporters “at least they need to go through the competition, and now say in public what their political stands are. And then hopefully we can have more 50% of the pro-democratic candidates go into the council, to try and make a change within the system.”

The Hong Kong and Mainland governments are reported to be blindsided by the election results, with leaks that state media had pre-prepared headlines announcing a pro-government sweep. Outspoken Beijing supporter Junius Ho lost his seat in Tuen Mun, and while Umbrella Movement leader Joshua Wong was banned from running due to his support for Hong Kong independence, his proxy candidate Kelvin Lam won in South Horizons West.

Democrats now control 17 of the city’s 18 District Councils. While the council’s largely oversee local administrative and budget matters, they also have 117 of the 1,200 votes for the selection of Hong Kong’s chief executive. The position, currently held by Carrie Lam, who introduced the now-withdrawn China extradition bill that sparked off the protests and police violence that has now run for six months, will next be up for a vote in 2022.

Cheung, who with her husband Gum Cheung Yee Man organises the grassroots arts platform C&G Apartment, continued, “I think at this moment, for Hong Kong, everyone would just like to try his or her own best to contribute a bit more. Previously, I did a lot of the work in the cultural sector, in the arts, in response to society, and I participated in civic movements, like the mass protests, the demonstrations, but it seems it is not enough.”