Robert Motherwell at 100: Gregory Gilbert reflects on the artist’s centenary

New research into the artist's work has offered new perspectives, but much work remains to be done 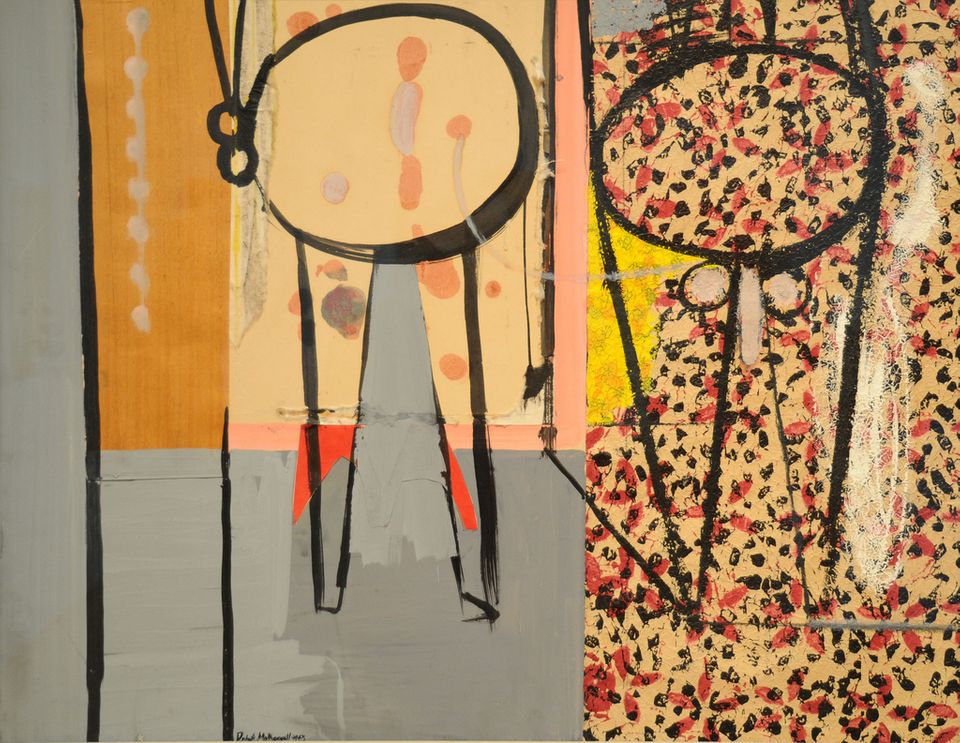 Last year marked the centenary of the birth of the Abstract Expressionist artist Robert Motherwell, who died in 1991. Over the past several years, a host of publications and exhibitions devoted to the artist have proven to be important and welcome additions to the somewhat sparse field of Motherwell studies, offering new perspectives on his career. Yet, in a more discouraging way, they also largely repackage and recirculate existing perceptions about the artist.

There is a lingering and conservative monographic aura around Motherwell scholarship, which has tended to lag behind the more rigorous interdisciplinary research on other Abstract Expressionists. Motherwell was one of the few artists of his generation who received a university education, graduating in the 1930s from Stanford University, where he studied American Pragmatist philosophy, Modernist poetry and psychology. He later pursued graduate training in philosophy and art history at Harvard and Columbia universities. The numerous philosophical, political and literary influences on his art and writings have yet to be fully examined. His disparate oeuvre deserves to be analysed within these more complex aesthetic and cultural contexts.

Throughout his career, Motherwell experimented with diverse modes and materials. His art lacked the signature style and symbolic conventions of Abstract Expressionists like Mark Rothko and Franz Kline, which has hindered the critical and scholarly reception of his work. Although Rosalind Krauss and Hal Foster have argued that Motherwell’s “plastic automatism” tamed Surrealism’s anarchic subjectivity into an autographic and marketable serial manner, the opposite is true. Motherwell deviated from Abstract Expressionism’s canonical norms, which makes his oeuvre especially worthy of revisionist consideration. It also reveals that Abstract Expressionism was not the cohesive monolith still promoted in many art history surveys. With his knowledge of Pragmatist fallibilism, the eclecticism of his art may have been a willful effort to challenge overly narrow and prescriptive definitions of the New York School. In the 1950s and 1960s, his art did not fit the predominant formalist criteria and teleological theories promoted by Clement Greenberg. Critical estimations of his art have fared no better during an age of postmodern theory.

The most noteworthy of the museum and gallery exhibitions around Motherwell’s centenary was the Guggenheim’s 2013 show Robert Motherwell: Early Collages, which was organised by Susan Davidson. The once-in-a-lifetime gathering of fragile pieces, a large number of which are still in private collections and rarely on public display, cemented the significance of Motherwell’s early collages. These are some of his most inventive and distinctive works, with their bold easel scale, experimental methods of fabrication, radical disjunctive designs and vibrantly colored papers (many of which have since faded, an important discovery made by conservators in preparing the exhibition).

Despite the virtues of the show, the catalogue presented relatively few new insights on Motherwell’s collages. With the important exception of noting the influence of Joan Miró’s and Jean Arp’s Surrealist collages, the authors explain Motherwell’s technique largely as an isolated practice driven by his own aesthetic interests. His early collages need to be examined in the broader context of collage trends in the 1940s, which has itself been virtually unstudied. Within the New York avant-garde of the time, collage was everywhere: in the poetry of T.S. Eliot, Marianne Moore and Benjamin Peret, as well as in the work of artists like Gerome Kamrowski, Ad Rinehart and Hananiah Harari. The trend was recognised in the curator Dorothy Miller’s exhibition Collage at the Museum of Modern Art in 1948. This show is now largely forgotten. It has been overshadowed by the museum’s more famous 1961 exhibition The Art of Assemblage, which has created the misperception that, after a fallow period, collage was revived in the 1950s as an outgrowth of Neo-Dada.

The latter movement figures in Catherine Craft’s book An Audience of Artists: Dada, Neo-Dada and the Emergence of Abstract Expressionism (University of Chicago Press, 2012), in which Motherwell emerges as an influential editor. His work on the 1951 anthology Dada Painters and Poets was, in the first place, decisive in shaping historical perceptions of the movement and its ideological underpinnings. At the urging of key Dada figures like Richard Huelsenbeck, Motherwell downplayed the movement’s original alignment with Communist politics by omitting texts pertaining to Berlin Dada. The result was an anthology focused on the aesthetic and conceptualist strains of Dada, which proved to be pivotal in the formation of radical tendencies like Happenings, Neo-Dada and Fluxus.

Yet it is too simple to say that Motherwell had no specific political ideology. Trenchant scholarship on the politics of Abstract Expressionism by David Craven and Nancy Jachec has analysed Motherwell’s ideological stance in relation to the interweaving of Marxist, Anarchist and Pragmatist currents within the Post-war American avant-garde. Motherwell was among a group including Harold Rosenberg, Sidney Hook and Lionel Trilling who adopted an alternative provisional politics. They renounced the dogmatic leftist Stalinism of the 1930s, and embraced, instead, the Pragmatist values of pluralism, moderation, diversity and democratic tolerance. In this way, they also rejected the conservative political absolutism and conformity of American Cold War culture. Liberal individualism and creative isolation was an intellectual underground in the vein of a Pragmatist community, which included the New York School. 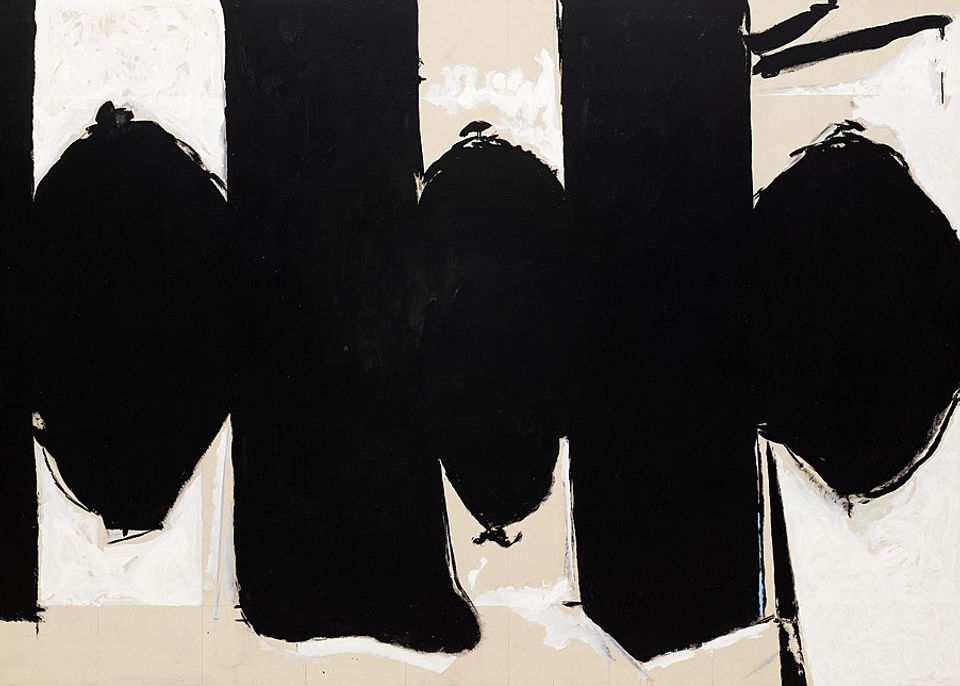 Motherwell’s Elegies in particular have political dimension, which has yet to be fully studied. They are a direct reference to the destruction of the Spanish Republic by Francisco Franco’s fascist regime, which was supported by the policies of the US government during the Cold War. Through Meyer Schapiro, Motherwell met political figures affiliated with Partisan Review, who actively supported the cause of the Spanish Republicans. Moreover, from the 1960s through the 1980s, Motherwell supported the Spanish Refugee Aid Committee and was close to Spanish artists like José Guerrero, who were dissident political exiles from Francoist Spain.

Ellen Landau looks at an earlier phase of Motherwell’s career in her insightful and detailed study Mexico and American Modernism (Yale University Press, 2013). Her topic—the impact of Mexican art and culture on the American avant-garde during the 1940s and 1950s—has largely been neglected in previous Motherwell scholarship. In 1941, the artist took an extended trip to Mexico with the young Chilean Surrealist Roberto Matta, where they met with the exiled Austrian Surrealist Wolfgang Paalen. Most accounts have stressed the influence of Matta’s Surrealist art on Motherwell’s early abstractions, but Landau argues the brash graphics and automatist spontaneity of Motherwell’s Mexican Sketchbook (1941) stem from Paalen’s expressionist gestural paintings.

More crucially, Landau’s book explores how Motherwell’s Mexican interlude sensitised him to the connection between Modernism and political crisis. While in Mexico, he was exposed to the leftist populist prints of José Guadalupe Posada, whose imagery was opposed to the repressive regime of President Porfirio Díaz, foreshadowing the upheaval of the Mexican Revolution of 1910-1920. Posada’s art denouncing political oppression, as well as Pancho Villa’s brutal death through assassination by fascist forces (elegized in Motherwell’s collage Pancho Villa, Dead and Alive from 1943), may have influenced his conception of the Elegies to the Spanish Republic.

The most notable publication that accompanied Motherwell’s centennial is the massive Motherwell Paintings and Collages: A Catalogue Raisonné, 1941-1991 (Yale University Press, 2012), which was compiled by Jack Flam, Katy Rogers and research staff at the Dedalus Foundation. The catalogue is a significant endeavor. It includes detailed entries on each work, critical essays and a definitive bibliography. The essays provide a concise summary of key documents that were culled from the foundation’s extensive Motherwell archives, providing researchers with an invaluable overview of primary sources on the artist.

A major revelation of the catalogue raisonné was Motherwell’s penchant for revision. The entries provide a record of the subtle and almost obsessive way Motherwell continuously re-thought the stylistic and iconographic elements of his works. He would also frequently alter existing works and change their titles even after they were exhibited and photographed for publication.

The essays suggest various reasons for Motherwell’s fixation on artistic revision, ranging from the desire for formal and symbolic variations to more complex and intriguing psychological interpretations, such as the idea that editing allowed him to detach himself from the distressing emotional content of his art. Another possible influence was Motherwell’s educational background in the Pragmatist philosophy of John Dewey, whose writings stressed shifting conditions of reality, the transitive nature of experience and the perpetual revisability of perception. Critics and art historians have regularly accused the artist of being repetitious and formulaic with extended series like the Elegies (1951-1991), but the artist’s continued reconsiderations push back against these criticisms.

My only critique is that with their specialised knowledge of Motherwell, it would have been beneficial for Flam and his team to define the current state of Motherwell studies, summarising key questions within the literature to indicate fruitful directions for future research. Still, this long-awaited and informative resource will no doubt stimulate and inform ambitious new research on the artist. More contextual studies like Craft’s and Landau’s represent the methodological direction needed in future scholarship on Motherwell, moving away from a narrow biographical framing and art historical inquiry limited to a study of his oeuvre. These broader revisionist perspectives may actually give us a more incisive view of Motherwell’s intellectual personality and artistic achievements.

Gregory Gilbert is Professor and director of the art history programme at Knox College in Galesburg, Illinois. In 2015, he was the recipient of a Dedalus Foundation Visiting Scholar at the Archives of American Art Fellowship for his research on Robert Motherwell.