After the fair's last-minute relocation that displaced Volta from Pier 90, exhibitors from both fairs credit 'generous' community support for good business As much as it seemed business-as-usual in the opening hours of the fair’s VIP hours on Wednesday, the Armory Show’s emergency move days before it was set to open makes this year a bit exceptional, if not simply for its 25th anniversary edition, then for how its suddenly precarious situation rallied New York’s art world.

“This is New York’s fair and New York really shows up for it”, Nicole Berry, the director of the fair, says. The city also “showed up” for the fair, despite Armory’s eleventh-hour relocation. With just days before the opening of both on 6 March, dangerous structural issues at Armory’s Pier 92 caused a third of its 198 exhibitors to be re-homed at the nearby Pier 90, where Volta was slated to run. The latter was cancelled and its 78 exhibitors were refunded, though many were still left out-of-pocket on shipping and travel costs. Yet within days, a pop-up art fair called Plan B, supported in part by Volta and housed in David Zwirner’s Chelsea gallery and a nearby private space on 21st Street, offered a scrappy alternative for 35 of the down-and-out dealers.

It would be a disservice to any of these fairs—whether open, cancelled or temporary—to mention one without the other this year, and dealers at both Armory and Plan B reported decent sales after the first day. At the former, the up-and-coming Seattle-based dealer Mariane Ibrahim had sold out her booth of glittery, full-figured female silhouettes by Haitian-American artist Florine Demosthene, priced at $7,000 each. “There’s a great range of collectors at this fair that are interested in diversifying their collections,” Ibrahim says. Indeed, works by women were selling well at all price points. Hollis Taggart sold Lee Krasner’s Peacock (1973) for $1m by the end of the VIP day. The London-based dealer Alison Jacques, who devoted her booth to works spanning Dorothea Tanning’s career—including one of the last works she ever made, Victory (2005), a framed piece of what looks like burnt toast—reported the sale of one of the artist’s paintings for $250,000 and several works on paper ranging from $25,000 to $60,000. Jessica Silverman out of Oakland, California, saw significant interest in Martha Friedman’s glass-and-rubber sculptures that look like severed fingers ($20,000 each). Susan Sheehan gallery sold a woodcut by Helen Frankenthaler to to Princeton University Art Museum in addition to prints by Joan Mitchell.

In keeping with the market trend of the past couple of years, there was also significant interest in works by artists of colour. Representatives of several museums rushed to Los Angeles-based Kohn Gallery’s booth to bid on Jonathan Lyndon Chase’s Dawn Embrace (2019), which sold for an undisclosed amount to the Walker Art Center in Minneapolis, while another of the young painter’s works went to ICA Miami. Roberts Projects sold works by Kehinde Wiley and Jeffrey Gibson ranging from $150,000 to $300,000 and notes “multiple institutional reserves”. It is not just the socially-conscious collector base that dealers appreciate about Armory, however. “We’ve always had good experiences and made good sales in the three years we have participated,” says Thorsten Albertz of the New York-based gallery Albertz Benda. The gallery is showing abstract ceramic works by the American sculptor Brie Ruias, priced between $20,000 and $35,000, several of which had sold by the end of Wednesday. “But we’re especially interested in the new leadership of the fair”, which has proven itself in the face of adversity, according to Albertz—a nod to Berry. Since her installation in 2017 after former director Ben Genocchio was accused of sexual harassment, Berry has faced down an opening-day blizzard for her first edition of the fair and now a close-to-collapsing pier in her second.

“The challenge [of the move] was unanticipated to say the least,” Armory director Nicole Berry says. “But there was no alternative, we had to pull it off. We spend the whole year working on this one event.” Berry says that the support of the New York art community quelled her anxiety as the show opened Wednesday. In her opening remarks, she thanked Volta director Amanda Coulson for her “generous support” in helping Armory realise its “expanded” location on such short notice.

Even with Plan B’s opening underway at the same time, Coulson was at the Armory Show when it opened its doors in Volta’s former venue. “I’m here because I want to support the fair,” she says, adding that the situation, though unfortunate, is not a case of “the big guy picking on the little guy”. 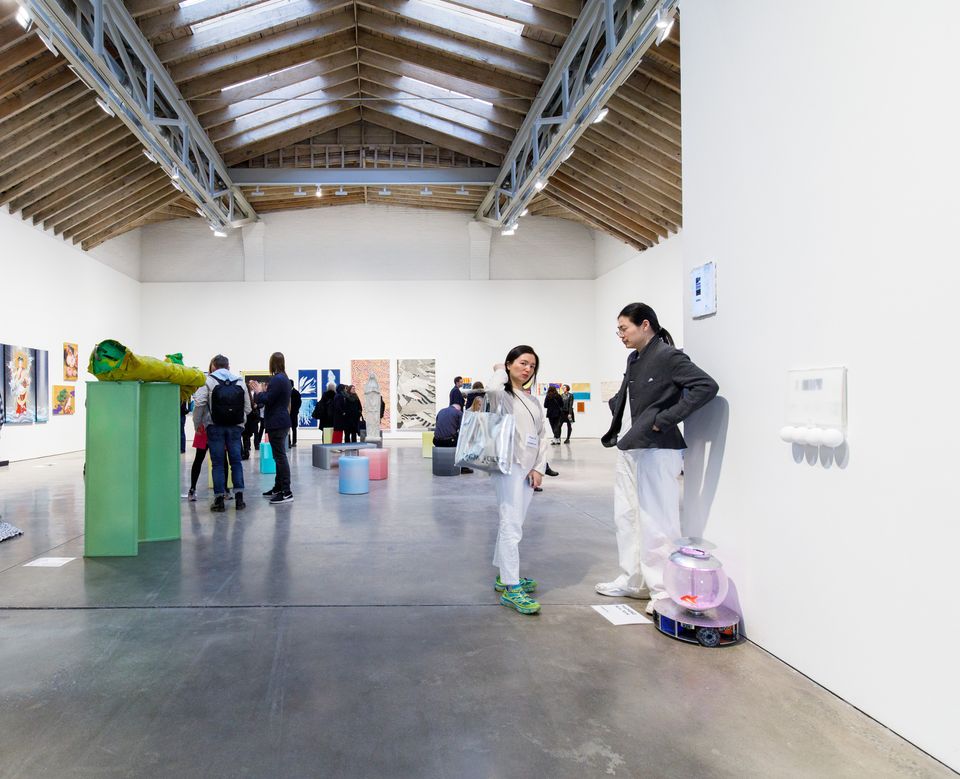 Volta exhibitors at the Plan B pop-up event have lauded Coulson’s team for their management of the last-minute pivot, though many say sales have been slow to start. Both spaces for the fair have a fire-code limit of 70 people, which means there is less of a frenetic fair feel. Overall, many report just being thankful to have a place to show their work after the news of Volta’s cancellation. “It just goes to show how important it is for those who can lend support to offer it,” says Sim Smith, a Plan B exhibitor who had shipped work from London for Volta. “This was a genuine time of need but if there are spaces and people who can come together and give opportunities to young galleries who may not otherwise be able to realise certain projects, then it’s something I feel we should see more of.”

Plan B certainly has the same community-driven feel to it as the Armory Show did when it began as a hodgepodge alternative exhibition at the Gramercy Park Hotel in 1994. It makes for a timely homage of sorts on the 25th anniversary of the now-venerable fair. Berry recognises, however, that its growth from a hotel event with only a few hundred visitors to an internationally renowned art market event with an average 65,000 visitors requires just management. “With this larger audience, comes greater responsibility. We must be additive to a sustainable economic ecosystem, we must support our clients [and] the galleries,” she says, adding that she hopes the fair will remain a “reflection of the enduring strength and promise of New York’s cultural and commercial landscape.”