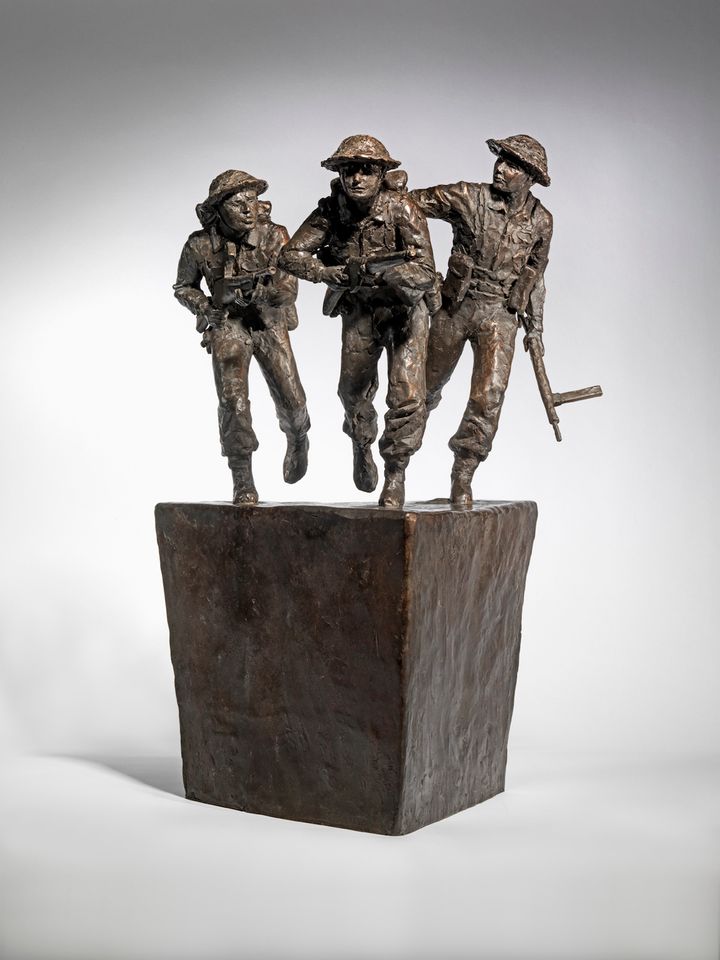 A memorial to the Normandy landings, created by the UK sculptor David Williams-Ellis, will be unveiled today by Prime Minister Theresa May and President Emmanuel Macron in the town of Ver-sur-Mer. The 18-foot-high D-Day sculpture, marking the 75th anniversary of the largest amphibious invasion in the history of warfare, shows a trio of soldiers moving forward. The work stands above Gold Beach, the centre beach of the five designated landing areas for thousands of UK soldiers on 6 June 1944.

Maquettes for Williams-Ellis’ design are due to go show at the Masterpiece fair in London later this month, which runs from 27 June-3 July. The pieces can be purchased as individual figures and are priced at £6,750 each (editions of nine) or as a group at £25,000.

The works will be shown at the fair by Portland Gallery of London, which will host an exhibition of William-Ellis’ D-Day maquettes next week from 11-21 June. “The bronze sculptures that you will see in this exhibition were the preparation for the completed work and the conclusion of the concept for the final sculpture," writes Williams-Ellis in the catalogue.

“It was imperative that the sculpture encapsulated the true essence of comradeship, leadership, energy and endeavour and does justice to the 22,442 British soldiers who died during the Normandy Campaign," William-Ellis adds. He told The Guardian that he worked with an ex-footballer and a ballet dancer to model the figures.

The sculpture will stand in front of the British Normandy Memorial, a walled forecourt designed by the architect Liam O’Connor, which is scheduled for completion by 2020. The names of the servicemen and women who died on D-Day will be inscribed on 160 columns around the enclosed monument.

William-Ellis’ sculpture and O’Connor’s memorial are both backed by the London-based Normandy Memorial Trust. “The core memorial has been financed by the British government from the LIBOR (armed forces covenant) fund," the trust says in a statement.