Sent packing: V&A mission to empty 250,000 objects from Blythe House is on target 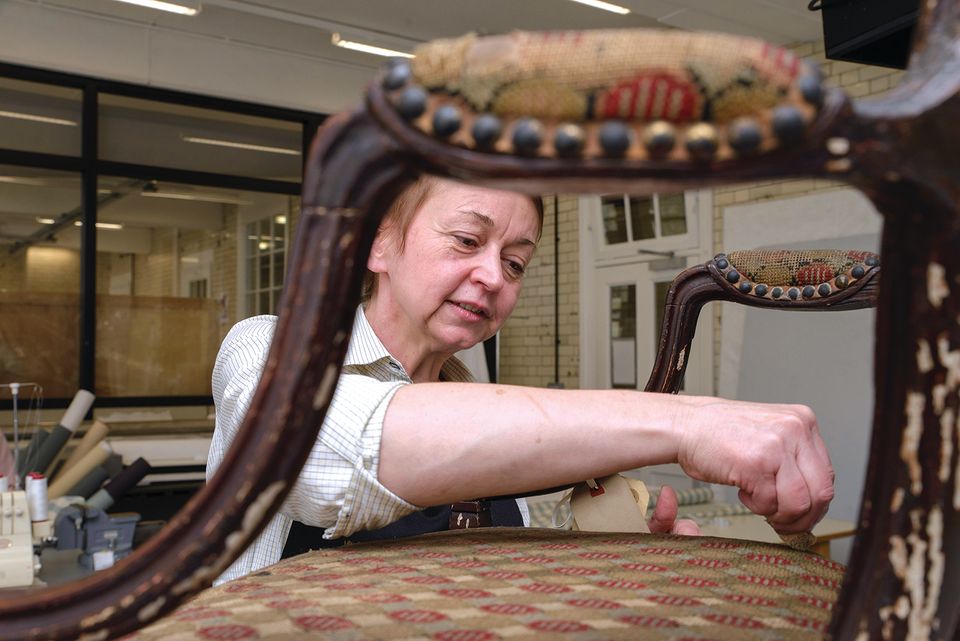 Isobel Harcourt works on the disintegrating upholstery and flaking paint of a Georgian chair, one of around 250,000 V&A objects being catalogued and conserved before the museum vacates its Blythe House stores at the end of 2022 © Victoria and Albert Museum

For many, the unforgiving light of January reinforces New Year’s resolutions about spring cleaning. For the Victoria and Albert Museum (V&A), the task ahead is urgent and epic. Philippa Mackenzie heads a daunting project to sort, conserve where necessary, photograph, barcode, label and pack 250,000 objects, plus 350,000 books and thousands more prints, drawings, account books, samples and designs in hundreds of archive collections, before the museum has to vacate its storage space in west London.

The V&A, along with the Science Museum Group and the British Museum, has occupied acres of space in Blythe House in west London since the government bought the sprawling 1899 listed building as museum storage in 1979. Unlike US museums, the UK’s national museums are restricted by law from deaccessioning, so the volume their collections occupy in storage grows inexorably to encompass many objects that are of possible interest to researchers but are unlikely ever to go on display.

In 2015, the government announced that the building would be sold for redevelopment as housing. The V&A received a £50m government grant for the move to Here East, a new archive, storage and exhibition space under development near its new riverside V&A East museum on the Stratford site of the 2012 Olympic Games. Both are to open in 2023, and Mackenzie’s reams of spreadsheets show the V&A’s part of Blythe House completely emptied by December 2022.

Staff members are fond of their grand and eccentric building, but it has tried their patience, as it is freezing in winter, boiling in summer, and frequently without any working lifts serving the warren of floor levels. Windows had to be removed to get some of the largest objects in, and will have to come out again to get them out. The new building will greatly improve conditions for the collections, the staff and the public, allowing displays such as the huge painted back cloths for famous Ballets Russes productions, including Natalia Goncharova’s The Firebird (1926), and Picasso’s Le Train Bleu (1924).

Work continues in every corner of Blythe House, and the packing process itself is generating a wealth of information that will enrich the collection records online. Some staff are working in a converted Edwardian lavatory, while warmly dressed colleagues work in huts originally built for troops in the Second World War, where sculpture conservator Adriana Francescutto Miró pieces together delicate stained glass and stucco Islamic windows too fragile to lift on to a lightbox to photograph. 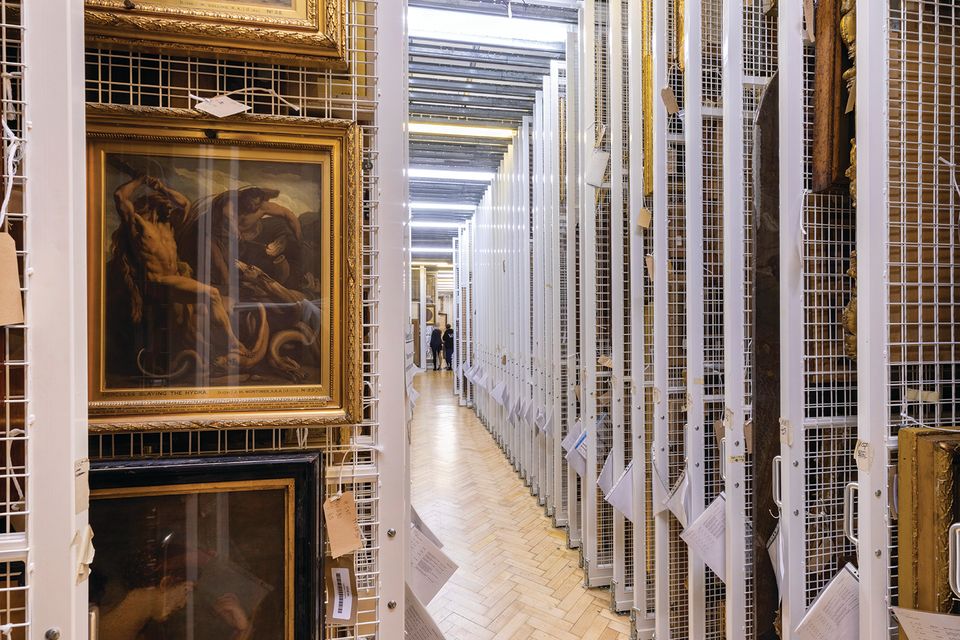 The intention is that all the objects go straight into their new home, preferably occupying the same footprint, although some will get more space, like the miniature clothes horses made by the conservator Maria Kinti for 19th--century Asian embroidered hats. Pretty as bunches of flowers, they were formerly stored piled flat on top of each other so that they were almost impossible to access and study.

“All we ever do in a museum is play God and try and stop time in its tracks,” Mackenzie says, watching Isobel Harcourt tackle the disintegrating upholstery and flaking paint of a once magnificent Georgian chair.

Many objects are ready to go, including a silk gown sumptuously embroidered with French wildflowers and Napoleonic gold bees, created by Norman Hartnell in 1957 for the Queen for a state banquet in Paris. One of his famed seamstresses recalls working behind drawn blinds for secrecy. It was worn just twice and later given to the museum by the Queen. It is already laid out in a huge drawer and just needs gentle padding and covering for the move. It appears immaculate, but Claudia Pereira turns back the skirt to reveal the touchingly grimy hem: “It’s not doing any harm, so we wouldn’t dream of cleaning it; it’s part of its history,” she says.

In a small, high corner room, the book conservator Anna Español Costa battles “red rot”, the sinisterly named decay in leatherbound volumes, typically in dark red leather. The binding can become brittle and split, disintegrating a book’s spine and leaving the cover detached, or the leather may crumble into a red powder, which itself damages paper. She gently cleans and binds together the sad books, but the decay is irreversible. Her room, with half the space taken up by stacked crates, has a spectacular Hogwartian view of jumbled rooftops, but its white tile walls, claimed to have been installed originally because of a strike by plasterers, and bitterly complained of by her Victorian predecessors, make it as cold as a fridge.

Some storage counts are still growing: many of the tight rolls of stained glass designs from the Joseph Bell company, which survived from 1840 until 1996, were found to contain a dozen or more enormous tattered sheets of paper. Most had not been unrolled since the windows were completed, and after cleaning, repairing and re-rolling them more gently, the paper conservator Victoria Haddock suspects that many will never be unfurled again.

The theatre collection includes century-old costumes designed to last for only one production, or paper ephemera for one night—such as programmes that show how Oscar Wilde’s name was dropped from a production of The Importance of Being Earnest after his disgrace and imprisonment in 1895. Mackenzie’s object count has just gone up to at least 250,005, with the arrival of spectacular headdresses from the National Theatre’s production of Follies. “You have got to stop collecting—now!” she threatens the head of collections management, Ramona Riedzewski, with mock severity.

So far, Mackenzie says, the project is on target but she admits: “I do lie awake at night, counting storage boxes.”