Recent research explains why women masqueraded as men on their coffins

Can contemporary feminism help us understand ancient Egypt? Absolutely, according to a new long-term collection exhibition opening at the Brooklyn Museum today, 15 December. A Woman’s Afterlife: Gender Transformation in Ancient Egypt (through 2018)—part of the museum’s exhibition cycle A Year of Yes, which celebrates the tenth anniversary of its Elizabeth A. Sackler Center for Feminist Art—answers “a long-term problem that puzzled Egyptologists before feminist ideas were present”, says the show’s curator, Edward Bleiberg.

The riddle: why are ancient Egyptian women sometimes depicted with male attributes, such as red skin, and referred to in masculine pronouns on their coffins? The answer could come from the Egyptologist Kathleyn M. Cooney, whose research factored in sexuality and gender. Through the “use of colour symbolism and language, women can overcome the difficulty that the ancient Egyptians believed women would have to be reborn into the next world”, Bleiberg says. This obstacle was the idea that only males could generate a foetus, which they passed to females during intercourse. Thus a woman would need to be “changed into a man briefly, so that she could recreate herself, and changed back into a woman, so she could be reborn”, Bleiberg explains. 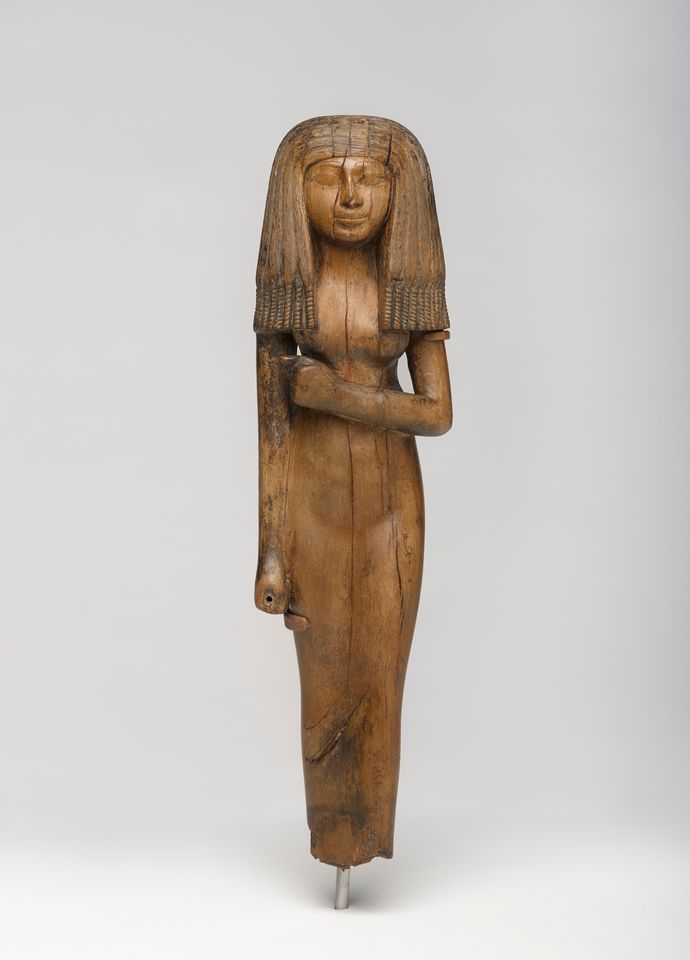 Other objects, like two wooden statues, show that females are once again treated as women when they enter the afterlife, despite their portrayal with male attributes on their coffins. There are also statues of Osiris and Isis, the original male-female pair who miraculously conceived their son Horus despite Osiris being killed and dismembered. “Once you enter into [the ancient Egyptian] system within their understanding of reproduction, then everything else they do makes perfect sense,” Bleiberg says.

But contemporary viewpoints like feminism can be a key to understanding this system. “In the course of my own career as an Egyptologist, I’ve seen the way second-wave feminism has impacted the way we interpret Egyptian material,” Bleiberg says. “When I was in graduate school in the [1970s], the way we asked questions and answered questions about the role of women in ancient Egypt was completely different from the way it is now.” Who is asking the questions is also important, he adds, noting that half of his classmates were women, unlike in earlier generations of Egyptologists.

“It’s really a different world than it was 40 years ago,” Bleiberg says. “We’re just so much better able to appreciate the contributions of all people than we were before.”