To mark the 200th anniversary of his birth, a book celebrates Adolph Menzel as the “painter of modern life”

The Franco-Prussian War started in the summer of 1870. The painting The Departure of King Wilhelm I to the Army on 31 July 1870, produced by Adolph Menzel (1815–1905) in the following year, shows the aged Prussian king processing in his coach along the grand Unter den Linden boulevard in Berlin, surrounded by a crowd of people who are watching rather than cheering. The artist is clearly more interested in the newspaper boy in the foreground, playing with a dog, and the city-dweller reading his newspaper with his back to the street and a student reading over his shoulder.

This view of reality – as a kaleidoscope of disconnected events and isolated incidents – is characteristic of Menzel’s vision. Characteristic, at any rate, of the late Menzel, after his sobering visit to the battlefield at Königgrätz in Bohemia in 1866, where Prussia had brought Austria’s supremacy in the German-speaking world to an end. In the two years following this, Menzel made two trips to Paris. Werner Busch, for 22 years – until 2010 – professor of art history at Freie Universität Berlin, emphasises in his new, comprehensive and superlatively illustrated monograph Adolph Menzel: Auf der Suche nach der Wirklichkeit [Adolph Menzel: in search of reality] the importance of these trips to the French capital – of which there were three in all, the first much earlier, dating back to 1855 – for the artist who was born on 8 December, just more than 200 years ago. What remained as a subject for Menzel, says Busch, “was the present in its chaos and meaninglessness. Just a year after Bohemia Menzel was in Paris, discovering the utterly un-heroic metropolis. For him there could no longer be any positive statements – just a despairing record of the existing state of things.”

How far this change of subject matter was a conscious decision on Menzel’s part is something Busch has to leave unresolved. Busch, the ultimate classical art historian, is a masterful interpreter of the pictures. And Menzel’s paintings with Parisian subjects – few in number but immensely rich in content – suggest a direct connection with the new metropolitan art in the city Menzel always referred to as “Babylon”. Menzel’s model was Édouard Manet, whose self-organised exhibition during the World Exhibition of 1867 he probably saw, even if we lack a record of this visit by the artist himself. Busch persuasively sets out the similarities – or, better, the points of comparison – between Menzel’s painting Afternoon in the Tuileries Gardens and Manet’s Music in the Tuileries Gardens, starting with the title and strikingly obvious in the composition of the densely populated scenery; following the acquisition of Menzel’s painting a few years ago, both pictures are now held in the collection of the National Gallery in London.

Yet Busch considers it worth only a few sentences that Menzel visited his friend Ernest Meissonier, who was the same age as he, in Paris – a successful salon painter who was highly esteemed for his hyper-realistic style of painting. Meissonier exhibited at the 1867 World Exhibition – as indeed did Menzel, who was awarded a medal for his historical painting Frederick the Great and his Men at the Battle of Hochkirch (1856, destroyed in the Second World War). Given his rejection of the Paris avant-garde, therefore, Menzel’s unavowed engagement with their modern subjects is surprising. None of this is new, of course, yet Busch’s picture analyses plausibly chart Menzel’s development into the “painter of modern life” Charles Baudelaire had called for, revealing this as his outstanding legacy. It is strange that Busch writes of the earlier paintings of Frederick the Great – which underpinned Menzel’s standing as an artist for his own contemporaries and above all for Emperor Wilhelm II – that they “represent the essence of Menzel’s art down to the present day”. This has no longer been the case for some decades now – if we think of the works of Werner Hofmann, for example.

Busch is not solely concerned with Menzel’s modernity, though, venturing a quite different explanation for his uniqueness – uniqueness, at least, in German 19th-century art. Busch declares this area of interest right at the start: “What impacts did Menzel’s physical disadvantage, his small stature, have on his art? How did he compensate for this deficiency? Here we attempt, cautiously, to touch upon Menzel’s psyche, too – even if this is frowned upon in art history”. Busch himself calls this question a “risk”. Menzel actually bore his destiny – insofar as it affected his physique – without complaint, except in the year 1866, when he despaired at being barred from greater physical proximity to the fighting. Yet focusing on the artist’s extremely small stature – he was only 1m 40cm tall – has become a standard topos of the Menzel literature. Thus, for example, Peter-Klaus Schuster, the brilliant former general director of Staatliche Museen zu Berlin (the National Museums in Berlin) and a student of Hofmann, wrote in the catalogue of the major Menzel exhibition of 1996–97: “It is clear that Menzel’s role as an observer is that of an outsider. Because of his small physical stature he seems excluded from the adult world. He looks with the penetrating, attentive gaze of the foreigner”. Busch takes up this theme of foreignness almost word for word, writing: “His entire way of life was a defensive battle, a struggle to depict reality as a compensation for being largely excluded from life himself.” 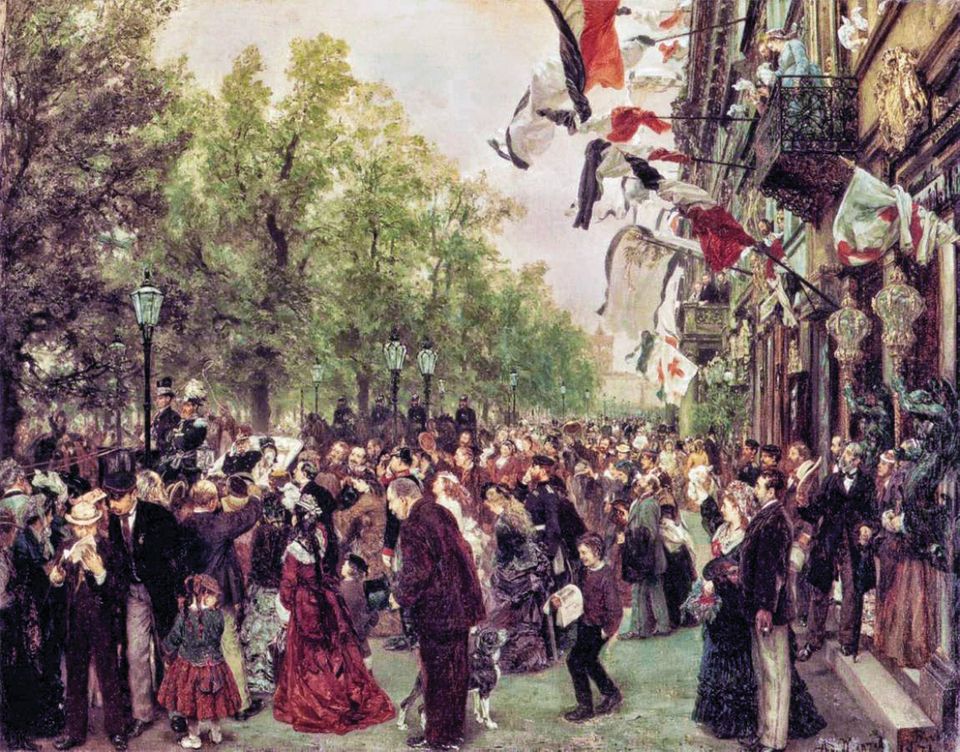 The year after the Franco-Prussian War began in 1870, Adolph Menzel painted The Departure of King Wilhelm I to the Army on 31 July 1870. The artist is clearly more interested in the newspaper boy in the foreground, playing with a dog, the city-dweller reading his newspaper with his back to the street and a student reading over his shoulder. © Nationalgalerie, Berlin

Excluded from life? Merely because Menzel probably lacked – a fact that is trundled out repeatedly – any sexual experience? Michael Fried in particular, in his idiosyncratic study Menzel’s Realism: Art and Embodiment in Nineteenth-Century Berlin (2002), has pointed to the physiological preconditions of Menzel’s art. Busch emphasises his affinity with Fried’s “view of things”, though he surpasses Fried with his precise pictorial analysis. All in all, Busch shows how carefully Menzel constructed his pictures, using the golden section in particular – offering a stark contrast to the widely held view that the intimate 1840s pictures especially are “spontaneous”. Taking a key 19th-century image, The Berlin-Potsdam Railway of 1847 – one of the earliest depictions of the industrial age – Busch establishes that Menzel carefully constructed this painting in the studio, using numerous sketches from nature in order to achieve the picture’s suggestive impact: the train looks rather toy-like, the natural scene almost untouched – yet the railway is clearly a domineering presence, even so.

After his painting of Wilhelm I’s coronation as King of Prussia, completed in 1865, Menzel was regularly invited to the Berlin court and it is well known that he used to climb on chairs and tables in order to survey the bustle of court society and draw the heads of individuals in the throng. A masterpiece such as Supper at the Ball of 1878 is painted from this same, unnaturally high perspective. For Menzel, no detail was too insignificant to be depicted. Every one of his late pictures – Menzel’s last oil painting, Piazza d’Erbe in Verona, was produced in 1884 – might be criticised for being “a piece made of pieces”: the judgement Busch cites from around 1900, in the wake of Impressionism. Menzel needed to assure himself, physically, of the objects he depicted – this is the main idea Busch takes up from Fried and continues. “It is said of Menzel that he reproduced reality with as little filtering as possible,” writes Busch in his introduction, “yet it will be shown in his case that the appropriation of reality becomes, to an extreme degree, a physical act, in the service of personal experience and self-assertion, an act that never occurs without a substantial dose of subjective involvement, however much he seeks to suppress it.”

Opinions may vary on that matter: such an existentially loaded viewpoint overlooks in particular Menzel’s distinctive humour, which is less apparent in the paintings than in the masterful gouaches Menzel used to record his experiences on journeys and during his spa visits. The awkwardness of travellers as yet unaccustomed to the railway prompted some of his most humorous images, such as On a Journey to Beautiful Countryside of 1892. Menzel’s compulsion to appropriate, literally, every object, every aspect of reality, by creating a second reality with his pencil on the paper of his sketchbook, in no way contradicts the playful effortlessness of works like this.

Menzel did not penetrate beyond the physical experience of reality. “For Menzel,” as Werner Busch concludes, “there remained only a feeling of alienation. Society offers no comfort and he is not inspired by any hope of something beyond it. His only consolation was his work or, more precisely, his artistic activity as a physical self-realisation, the experience of his unique and separate individuality”. Yet if we turn this metaphysically loaded judgement on its head, seeing it from a positive angle, Adolph Menzel appears as what he unquestionably was: the modern artist par excellence.

• Bernhard Schulz is the art critic of Der Tagesspiegel, Berlin