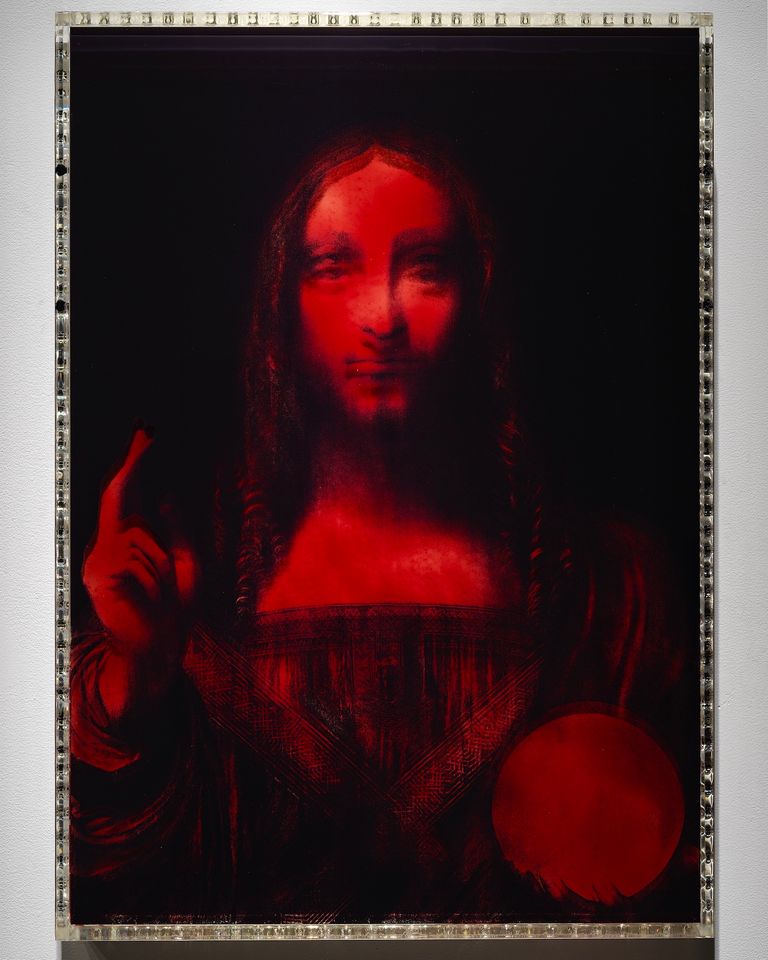 The ninth edition of the curator-centred Spring Break Art Show in New York, on view through 9 March, presents more than 120 projects addressing the theme of “in excess”. This year the show is fittingly located within the former Madison Avenue headquarters of the mainstream fashion retailer Ralph Lauren, where booths have been appropriated from remnant offices, cubicles and common spaces. The projects range from critiques on the commercial art world, our culture’s insatiable consumerism, the interminable feed of social media, and glossier, lighter works that aesthetically epitomise the theme.

What really shines in this edition of the fair, however, is our excessive digital media fixation. Among the highlights of the fair is a presentation titled Frenzy by the Chilean artist Claudia Bitrain and curator Lauren Powell. Comprised of a series of acrylic paintings and videos made from frame-by-frame paintings that are based on viral videos of inebriated teenagers, the works consider our online habits and the paradoxical way we consume disturbing content as comedic entertainment.

“The images in these videos are super un-aestheticised—they’re so poor, they’re shared too many times, they don’t even have good resolution and they’re anonymous,” Bitrain says. “Looking at something that is trash still-by-still is an excellent painting challenge: to take something totally anonymous and make it something poetic.” The presentation complements the artist’s other paintings of drunk teens that are currently included in a group show at Postmasters Gallery in Tribeca, also curated by Powell.

In The Person-Less Portrait, the curator Abigail Ogilvy has assembled a booth of works by the artists Katelyn Ledford and Marisa Adesman that reference self-image in the digital age. Ledford has produced a wallpaper patterned with a photograph of her own face after being “facetuned” to the perfect proportions, while Adesman’s video installations critique “consumer culture and how we consume oneself and one’s image”, Ogilvy says. In one video, the artist curls her hair using deli meats and bread and condiments, and in another she makes cookies using only her mouth. 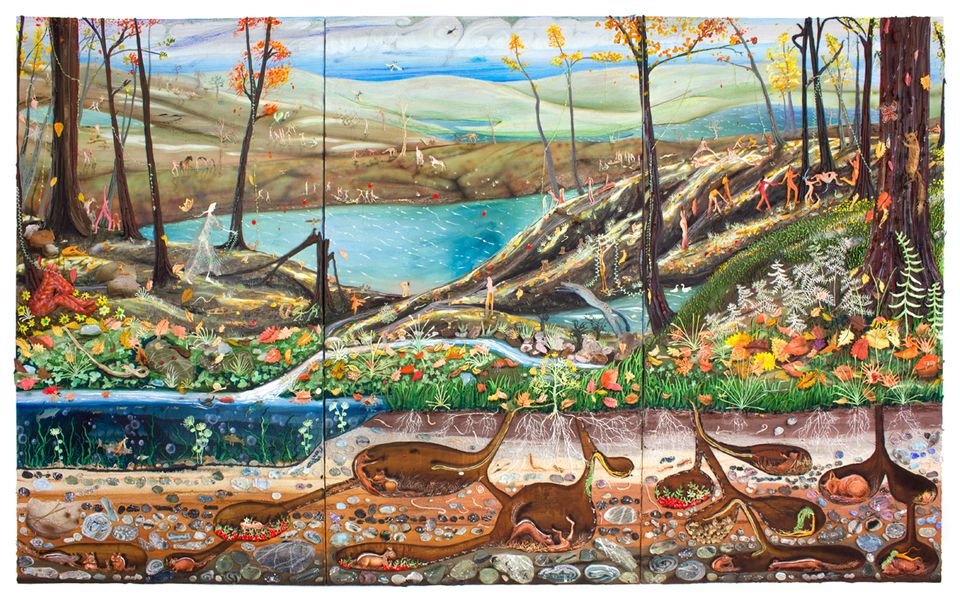 Other stand-out booths at the fair are more visceral than virtual. Burrowed, curated by Rachel Frank, Kristen Racaniello and Jacob Rhodes of Field Projects, presents a series of large-scale multi-media paintings by the US artist Kate Klingbeil that are deceptively cheerful but have a “Bosch-ian” quality to them, Rhodes says. The works show surreal maximalist landscapes and their equally turbulent underbellies, referencing the idea of “women being told to reduce, to tone down, to stop being too much”, and “burrowing” certain emotional elements of themselves, according to the artist.

And the Queens-based artist Jordan Eagles and curator Theodore Kerr of the artist collective What Would an HIV Doula Do? have produced an installation titled Vinci that appropriates a series of images of the Salvator Mundi, the painting of Jesus Christ attributed to Leonardo da Vinci that sold for a record $450m at Christie’s New York in 2017. The artist has covered an image of the work with a layer of blood from an undetectable HIV-positive person and projected the image onto a wall; on a separate wall, the original Christie’s catalogue has been laser-cut to hold the viles used to collect the blood. The work “raises questions around authenticity and detectability”, the artist says. “It also considers that a person who is undetectable today—years after the AIDS epidemic started—is experiencing a miracle because of medicine; there’s also the irony of spending half a billion dollars on a painting of Christ rather than using it to alleviate the sick, as Jesus would have wanted.” 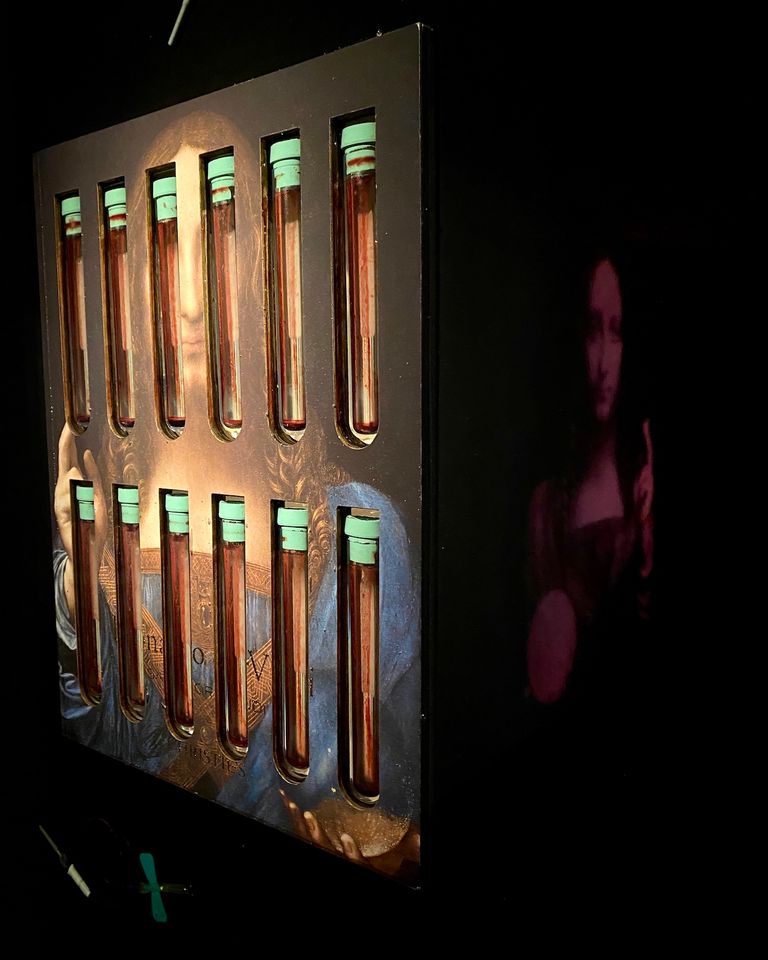 The fair was founded by the curators and artists Andrew Gori and Ambre Kelly in 2009 as a no-frills platform to showcase the work of emerging and mid-career artists and has been expanding ever since. Its inaugural edition was organised in the corridors of the St. Patrick’s Old Cathedral School in Nolita and contained around 20 projects. Around 18,000 visitors attended the 2019 edition of the fair and each edition in the past three years has seen an increase of around 2,000 visitors. Last year, the fair expanded to Los Angeles to coincide with the inaugural edition of Frieze; its 2020 Los Angeles edition presented the same theme as the New York iteration but on a smaller scale, featuring around 40 projects.

To date, the fair has sold more than $1m, a “substantial number considering the general median price averages between $2,000 and $6,000”, Gori says. This year, “submissions were the highest ever at over 500 entries, making us confident that we are still fulfilling a need to provide artists’ work with free space during one of Earth’s largest art weeks”.

Gori and Kelly maintain that the “mission of the fair has stayed the same” through its success and growth. “The desire to engage with less traditionally art-approved architectural nodes, as well as to roost under-seen artists’ works within those places, has never gone away”, the duo says. “And, we hope, the spirit and sense of discovery hasn’t either.”