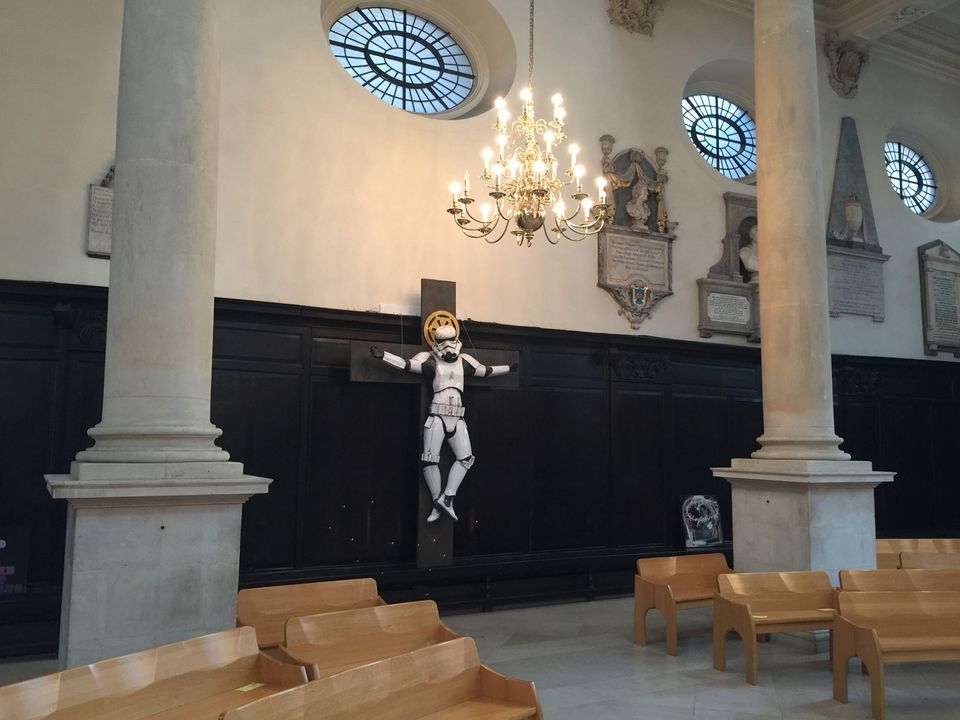 Christianity has been the inspiration behind countless pieces of art throughout history. But one more recent example is a whole world away from Da Vinci’s The Last Supper.

A life-size model of an Imperial Stormtrooper from the original 1977 Star Wars film has been installed as a crucifix for the centrepiece of Art Below’s Stations of the Cross exhibition at St Stephen Walbrook church. The work by Ryan Callahan, a street artist who goes under the name RYCA, has provoked complaints from many parishioners, and the show's organisers were asked to relocate the statue today, before the exhibition fully opens to the public on Thursday. There have also been questions over whether other parts of the exhibition, including works featuring nudity by Francis Bacon, Paul Benney and Ricardo Cinalli, are appropriate for display.

For all the exhibition’s controversy, curator Ben Moore’s heart is in the right place. It was set up to raise awareness towards finding his brother Tom, who has been missing since 2003, by supporting the Missing Tom fund. Another aim of the exhibition, says Revd Jonathan Evens, was to inspire debate. “This is an exhibition of images designed to provoke thought from artists grappling with their response to the challenge and scandal of Christ’s cross. I commend these images to you as an image that can open our ideas and minds to new reflections on the eternal significance.”

This is the third Stations of the Cross exhibition following events at St Marylebone Parish Church in 2014 and 2015, the latter of which featured a life-size body cast of English musician Pete Doherty. The 2018 edition is the first exhibition at the new venue of St Stephen Walbrook church. It remains to be seen if the exhibition will be invited back to the same church for 2019.

Update: After this article was published, the church decided that Ryan Callanan's work will be relocated rather than removed from the exhibition. A spokesman for the Diocese of London said in a statement: "St Stephen Walbrook is pleased to be hosting Art Below's exhibition on the Stations of the Cross. One work of art in particular, a depiction of a crucified Star Wars Stormtrooper by Ryan Callanan, was larger and more prominent than was anticipated when the exhibition was approved. Its position in the church as currently installed has proved to be distracting for some worshippers. As a result, following discussions with the curator, we have asked Art Below to reposition the work, so that it remains prominent but it is less of a distraction from the altar." The spokesman added that the church has not suggested that the works by Francis Bacon, Paul Benney and Ricardo Cinalli are inappropriate.