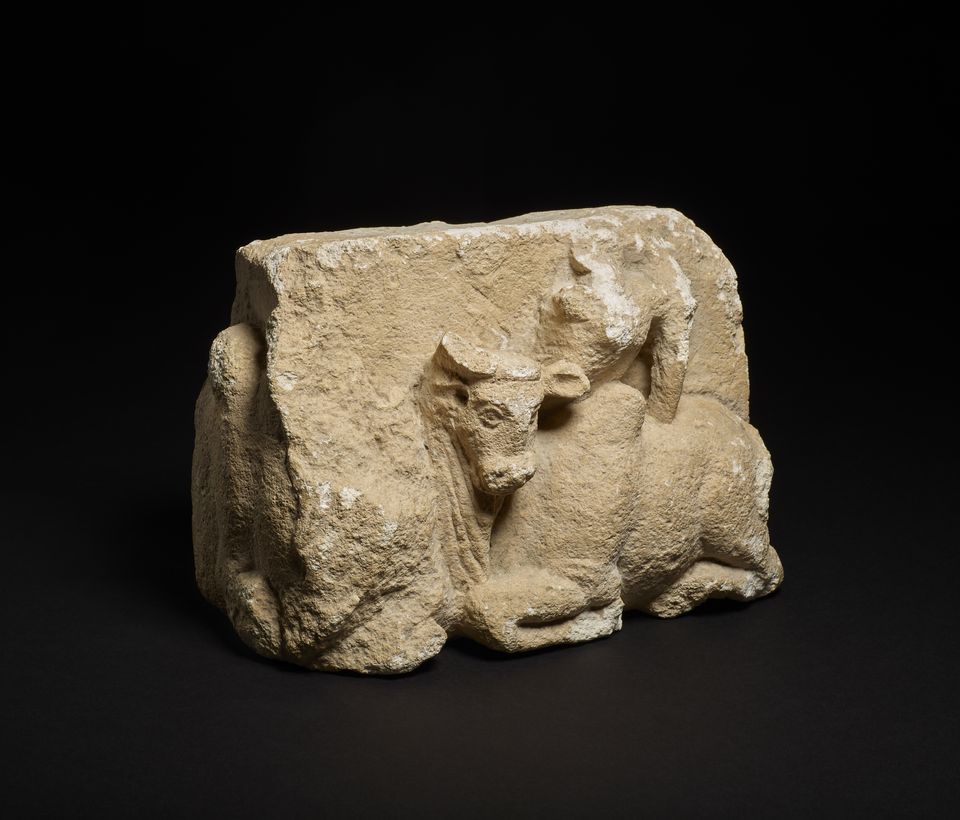 The sculpture, which shows two humped bulls, comes from the Surkh Kotal site in northern Afghanistan Courtesy of the British Museum

The recovery of an ancient limestone temple sculpture stolen from the National Museum of Afghanistan almost 30 years ago sends out a “powerful message” that related pieces looted at the same time can now be tracked down, says St John Simpson, assistant keeper of the Middle East department at the British Museum. The second-century work, which adorned a temple sanctuary, was part of a composite frieze; the other looted limestone blocks are still missing.

The sculpture, which shows two humped bulls, comes from the Surkh Kotal site in northern Afghanistan. Earlier today at a special ceremony, Saib Tayeb Jawad, Afghanistan's ambassador to the UK, acknowledged the British Museum’s role in the recovery. The sculpture is on display at the museum in London before returning to the National Museum in Kabul later this year.

The piece was offered for sale late last year by the Harwich-based online auction house Timeline Auctions. The limestone sculpture was withdrawn after the Art Loss Register, an international database of stolen art, spotted the piece; it was then seized by the Art and Antiques Unit of the Metropolitan Police service. Its stolen status was subsequently confirmed by the British Museum.

Christopher Wren of Timeline Auctions says that the vendor immediately relinquished any claim to ownership on being told of the origin and agreed that the sculpture must be returned to the National Museum of Afghanistan. He tells The Art Newspaper: “This piece was only discovered due to our policy of employing, and paying for, the Art Loss Register to examine all Western Asiatic items submitted to us for potential sale, irrespective of 'value'; this is also done for many pieces from other cultures and regions.”

The limestone corner block was excavated by a French archaeological expedition in the 1950s at Surkh Kotal. It formed part of a ceremonial frieze comprising other blocks showing human figures and bulls, which is thought to have adorned the inner part of a temple.

Following their discovery, the blocks were taken to Kabul and entered the collection of the National Museum of Afghanistan. All of the pieces, numbering more than a dozen, were however looted during the Afghan civil war (1992-94); the sculpture returning to Afghanistan is the first stolen antiquity from the Surkh Kotal temple to be recovered.

“The museum was on the front line,” Simpson says. “This is the first [missing work from the temple] that can be identified. I’m optimistic; we have seen a growing number of pieces identified and returned.” Since 2009, the British Museum has worked with the police and the UK government to return more than 2,300 antiquities illegally excavated at sites across Afghanistan. “The view in the museum sector is that we want by ethical and legal means, and in a timely manner, to return such pieces,” he adds.