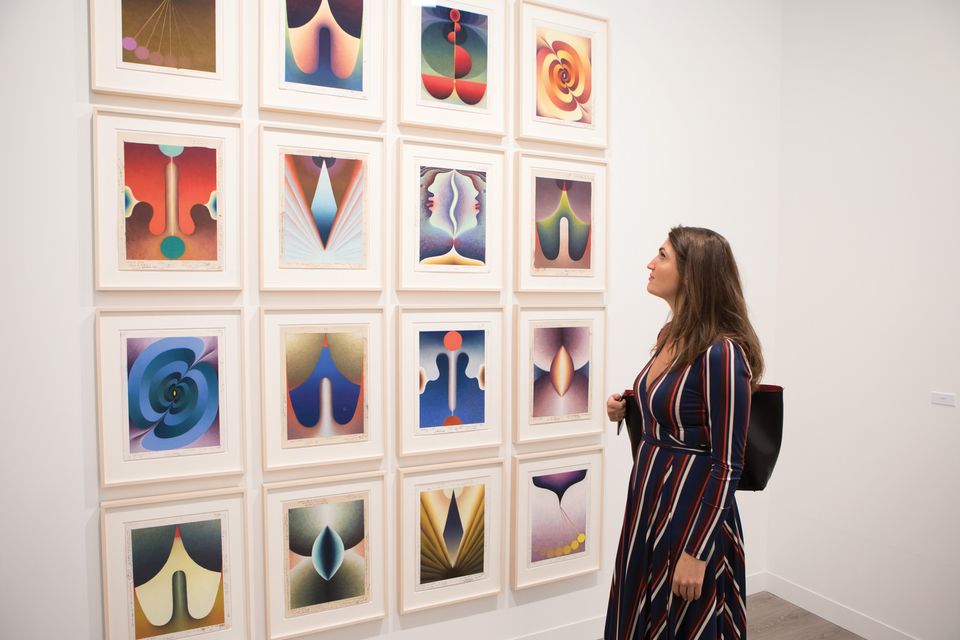 Pace found 16 buyers for 16 works by the young US painter Loie Hollowell, priced at $6,500 each David Owens

Despite a Brexit-inspired backdrop of uncertainty, the tents in Regent’s Park seem to be acting as a protective bubble around Frieze London and its sister fair devoted to pre-2000 art, Frieze Masters, where early sales were strong.

The UK’s credit rating was downgraded by Moody’s less than two weeks before the fair, but many dealers said that the economic effects had proved imperceptible so far—not that they were taking too many chances, as the moderate price points showed.

Wallets opened for a handful of monumental and exceptional pieces—Richard Artschwager’s late 1960s triptych depicting an orgy sold for $2.8m at the Hauser & Wirth/Moretti Fine Art stand and an early work by Daniel Buren sold for €1.5m at Nahmad Contemporary within the first ten minutes of Frieze Masters opening—but far more dealers reported sales below the $300,000 mark during the first two days. “Where you feel the most enquiries is just south of $1m,” said the newly minted dealer Brett Gorvy, formerly the head of contemporary art at Christie’s, who is showing at Frieze Masters for the first time as part of Lévy Gorvy.

A number of dealers were happy to see US collectors out in force after a lull last year. “The majority of people who buy art in London are actually not British,” says Hauser & Wirth’s Neil Wenman. On the gallery’s stand at Frieze London, organised by the classicist and TV personality Mary Beard, domestically scaled bronzes by artists including Subodh Gupta, Martin Creed and Louise Bourgeois were flying out of their museum-style vitrines. Wenman welcomed many Chinese clients, perhaps thanks to the gallery’s recent announcement of planned outposts in Shanghai and Hong Kong, but other dealers remarked on a lack of Asian buyers.

At both fairs, collectors were on the hunt for new (or new to them) talent with a unique, and often uniquely female, perspective. At Frieze London, the Sex Work section, including rediscoveries such as Renate Bertlmann, presented by Richard Saltoun, and Penny Slinger, with Blum & Poe, was raved about. Sprüth Magers’s stand featured works by Barbara Kruger, Kaari Upson, Pamela Rosenkranz and Jenny Holzer, whose LED work Survival (1989) sold for $375,000. The gallery fielded numerous enquiries about Astrid Klein’s late 1970s photocollages, priced at €38,000 each.

Sfeir-Semler Gallery, of Hamburg and Beirut, also showed works mostly by female artists who are represented by the gallery, including one of its recent signings, Dineo Seshee Bopape (b. 1981). Sculptures by the South African artist, who recently won the Pinchuk Foundation’s Future Generation Art Prize, were priced around $10,000 and had early takers in the fair’s VIP preview day on Wednesday.

Pace experienced a rush for works by the California-based painter Loie Hollowell (b. 1983), whose abstract paintings reminiscent of Georgia O’Keeffe sparked “massive interest, for good reason—sheer visual appeal”, according to Pace London’s co-director Elliot McDonald. The stand’s grid of 16 petite works on paper in pastel and graphite were sold to 16 collectors for $6,500 each.

Some have questioned whether the Frieze fairs risk becoming a victim of their own success, having prompted a glut of new auctions and gallery shows. Given the “sense of saturation” created in the market by the sheer number of events, Hauser & Wirth’s Wenman says: “There’s a need for quality. You have to bring the best examples.”