Impressionist, Modern and Surrealist art auction last night made £106.8m, 35% down on last year—but with three works sold for over £10m The stylishly monochromatic Jazz Age portrait of Ferry, a British-born cabaret singer in Paris, eventually fell to a telephone buyer at £16.3m (with fees), far above the previous record of $13.4m (£10.4m), achieved last November in New York. The painting, originally commissioned by Ferry’s financier husband (note the emphasis on that hefty engagement ring), had been estimated at £8m-£12m.

A painter with a distinctive Art Deco style highly prized by today’s collectors for its instant wallpower, De Lempicka is one of the many long-undervalued female artists whose auction prices are currently being recalibrated.

The De Lempicka was one of three works last night that sold for more than £10m. Christie’s and other auction houses will be hoping that such results reassure the world’s wealthiest collectors that London remains a lucrative place to sell high-value art, notwithstanding the disruption of a General Election and the UK’s long-awaited official departure from the EU.

Giovanna Bertazzoni, Christie’s co-chairman of Impressionist and Modern art, admits it was difficult coaxing consignments out of clients before the UK’s crucial vote. “After 12 December, a lot of things that had been cooking came to fruition,” Bertazzoni says, referring to how sellers had been reassured by the pound stabilising after the Conservative victory.

“The fluctuations of the currency. That was the only thing that mattered to them,” Bertazzoni says, who adds the wealthy are “agnostic” about where they choose to sell.

Overall, Christie’s sale raised £106.8m (with fees) from 49 lots, a result that was 35% down on the equivalent, but much bigger, auction last year. The atmosphere was appreciably more upbeat than at Sotheby’s the previous evening, where sales at the company’s first major post-Brexit auction had slid 43% to £49.9m (with fees). 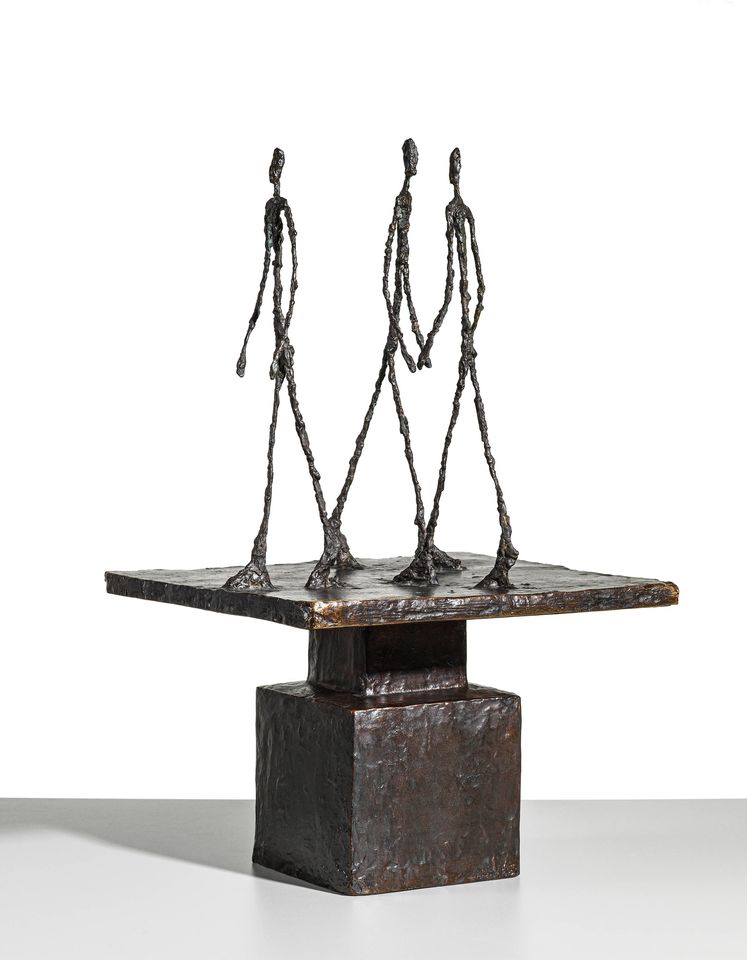 The credibility of these biannual London sales depends on international buyers spending millions on fresh-to-the-market works by the major names. A 1950 cast of Alberto Giacometti’s 28 inch-high bronze sculpture, Trois hommes qui marchent (Grand plateau), consisting of three of the artist’s celebrated “walking men”, had not been seen on the auction market since 2008 and was valued at £8m-£12m. It was bought in the room by the New York art adviser Nancy Whyte for £11.3m (with fees).

“It was pretty desirable and the estimate seemed fair,” says Hugh Gibson, a London dealer who specialises in Giacometti.

The most desirable of all the works in Christie’s sale proved to be Rene Magritte’s classic 1962 painting, A la rencontre de plaisir (Towards Pleasure), showing one of the artist’s trademark bowler-hatted men from behind, gazing up at the moon. The painting had been acquired directly from the artist by a Brussels collector and had remained in the same family.

From a commercial point of view, this was a Magritte with everything going for it and at one point the auctioneer completely lost track of the number of bidders. It was eventually bought by another client on a phone at £18.9m (with fees), more than double the low estimate.

“It was an iconic subject with broad appeal,” says Hugo Nathan, the co-founder of the London-based advisory company, Beaumont Nathan. “Few artists are easier to put on social media. It’s Instagram gold. Surrealists are riding high.”

Indeed they are, helped by crossover interest from contemporary buyers and by Christie’s holding thoughtfully curated specialist sales dedicated to the art movement since 2001. The auction room used to empty when the Surrealist section started, but now bidders stay on and this latest selection of a dozen works contributed a hefty £43.9m (with fees) to the night’s proceeds.

Elsewhere, the other stand out lot was an exceptionally rare George Grosz painting of Berlin street scene from 1918. Gefährliche Straße (Dangerous Street) was one of about ten canvases that have survived from this celebrated series of nightmarish visions of wartime Berlin. This masterwork of German Expressionism had never appeared on the market before and it sold above its estimate to a telephone bidder for an impressive enough price of £9.7m (with fees). But the fact that the price was far below that achieved for the far more decorative de Lempicka was a sign of our collecting times.

Yet art history did still seem to matter at times at Christie’s, such as when a slight, barely begun canvas from Cézanne’s last great La Montaigne Saint-Victoire series of paintings came under the hammer with a low estimate of £1.5m. Despite being overwhelmed by a truly hideous 18th century-style frame, this work from around 1904 was pushed by two determined bidders to £2.7m (with fees).

Christie’s first major sale after Brexit gave a reassuring impression that the London art market was getting back to normal.

“Wherever they are, whether they’re in New York, Paris or London, we will follow the pictures,” says the New York-based art adviser Abigail Asher, who attended the sale, but who, like so many in this sector, is already thinking about the blockbuster series of May auctions currently being gathered in Manhattan. That series will include the eagerly awaited sale of the Macklowe collection, rumoured to be worth around $800m, for which the auction houses are currently pitching.

But in London it seems that $25m has become the new normal for the top of the market. In New York it’s $100m.