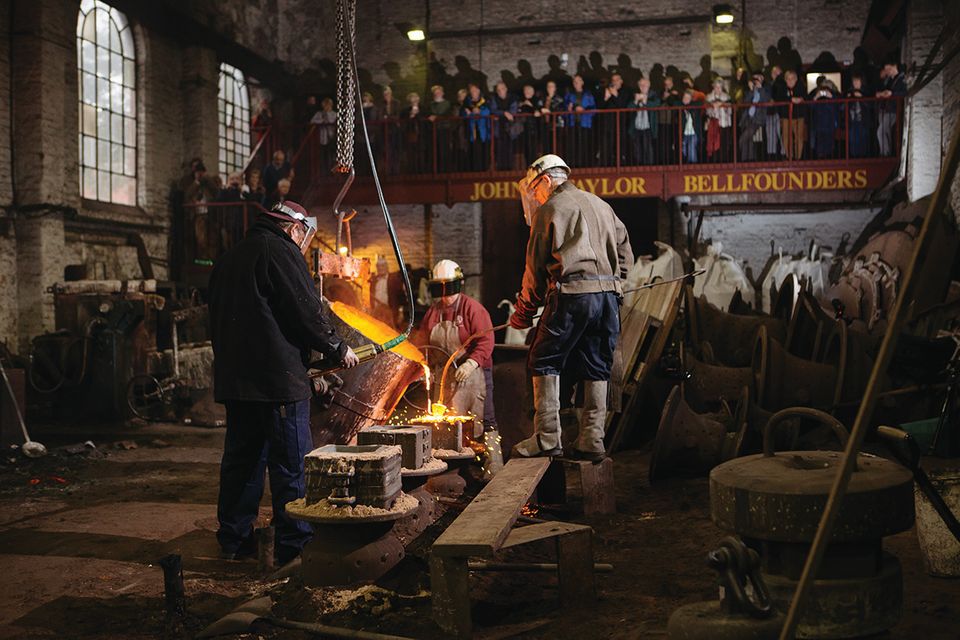 When in the spring of 2020 the strange hush fell over Britain, the skies and the roads virtually emptied of traffic, and the bustle stilled in the streets, one other element almost disappeared from the soundscape of everyday life: the bells of thousands of churches and public buildings. A few with mechanical hammers still rang, but most were silenced, no longer marking weddings, funerals or the passing days.

Across the world, bells are special: they have names, inscriptions and histories, and are installed with blessings or special ceremonies. They were so missed that the announcement that Canterbury Cathedral’s great Bell Harry would ring out over Easter made national news.

In Loughborough, Leicestershire, even the town’s magnificent carillon, a war memorial for which Edgar Elgar composed a work in 1923, has lost its voice. All its 47 bells, along with those for thousands of churches, including the 17-tonne Great Paul for St Paul’s Cathedral in London, were cast by a famous local firm, John Taylor’s Bell Foundry.

Loughborough bells are spread across most Commonwealth countries, as well as the US. One of the most recent, a 6ft, five-tonne giant, was flown 10,000 miles by the Royal Australian Air Force to Canberra, just before the coronavirus (Covid-19) crisis put an end to international flights. It joins 57 Loughborough bells in the National Carillon—originally a 1970 gift from the UK to Australia.

The operation is now as silent as the bells, thanks to the coronavirus, the machinery meticulously cleaned and oiled before the workers locked the doors and left

Since the closure in 2017 of the much older Whitechapel bell foundry in East London, Taylor’s, dating from 1859, has been the last remaining major bell foundry in the UK. It was rescued from administration in 2009 and is now a tenant of the charitable Loughborough Bellfoundry Trust, which owns the site and had just launched a fundraising campaign to safeguard the foundry’s future, restore its decaying Victorian buildings and create a new museum on the history not just of Taylor’s but of bells in Britain. The operation is now as silent as the bells, thanks to the coronavirus, the machinery meticulously cleaned and oiled before the workers locked the doors and left.

The fundraising has stalled, too. Andrew Wilby, a trustee and former bell ringer, says that the worst leaks in the foundry’s roof have been patched through an emergency grant from Historic England, which had put the buildings on its heritage-at-risk register. The National Lottery Heritage Fund has provided a £300,000 development grant, but the Loughborough Bellfoundry Trust must raise £1.1m to secure a £3.7m grant from the fund toward a project cost of just under £5m. The trust was halfway to the £1.1m target when everything stopped, and although small individual donations still trickle in, many charities and heritage trusts they have applied to have postponed all their grant decisions.

Several years of orders are on the books. “The orders aren’t the problem,” Wilby says. “Getting back in and keeping the buildings standing is the problem.”

UPDATE (28 April): The headlines on this article were amended to reflect that Taylor’s bell foundry has not closed permanently as a result of coronavirus.

New York’s Hispanic Society gears up for its second act

New York’s Hispanic Society gears up for its second act