When the sun’s out, get your buns—and other extremities—out to catch some of these projects across the city 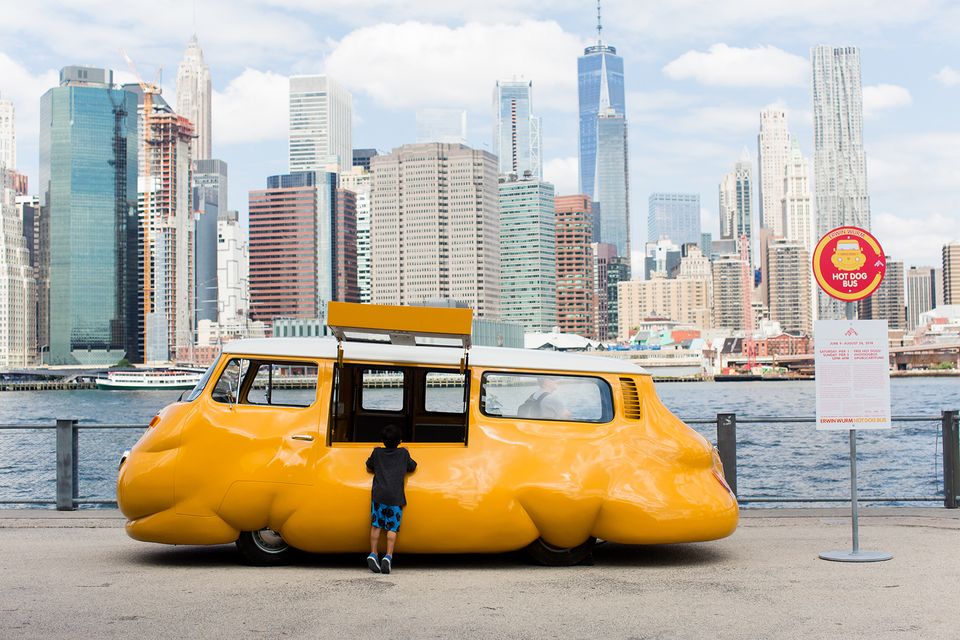 The yummiest project on this list, Erwin Wurm’s Hot Dog Bus, is giving out free hot dogs on Saturdays and Sundays in Brooklyn. The bus itself is a bright yellow, pudgier version of a VW van that looks fittingly like a bun carrying the wieners inside. While you’re at it, the Public Art Fund has two other pieces worth seeing around the city: Anselm Keifer’s massive, winged open book sculpture Uraeus in Manhattan at Rockefeller Center (until 22 July) and Tauba Auerbach’s Flow Separation (1 July-12 May 2019), a glittery camouflaged fireboat that has been brought out of retirement and docked at Hudson River Park’s Pier 66a so visitors can hitch a free ride during the weekend. Not a bad way to spend the dog days of summer. 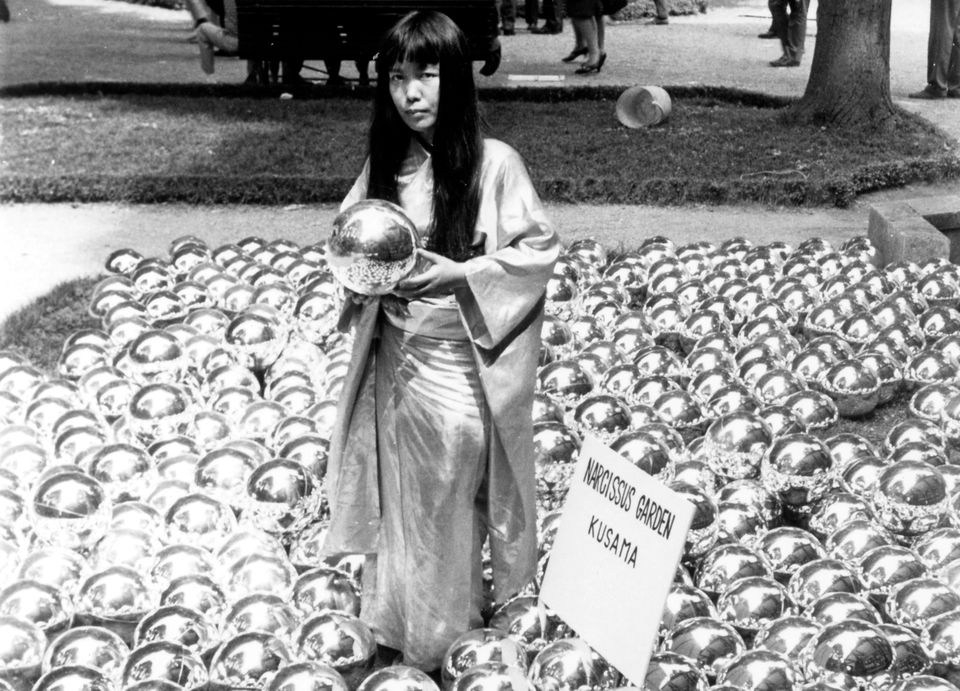 First staged as a guerilla performance at the 1966 Venice Biennale, Narcissus Garden is on view this summer in a former train garage at the defunct Fort Tilden Military Base. The piece is part of this year’s Rockaway! public art festival celebrating the recovery process after Hurricane Sandy of the oceanside Queens neighbourhood, which is still under threat from erosian. The installation has also been updated a bit since the 1960s, so the 1,500 mirrored balls are now made of stainless steel, not plastic. And Kusama herself will probably not be there in a gold kimono next to a sign that says “Your Narcissism for Sale” to try to sell one of the balls for $2, as she did in Venice. The artist has however worked with PS1’s director Klaus Biesenbach on the new installation, which will be in an abandoned train garage on the site. 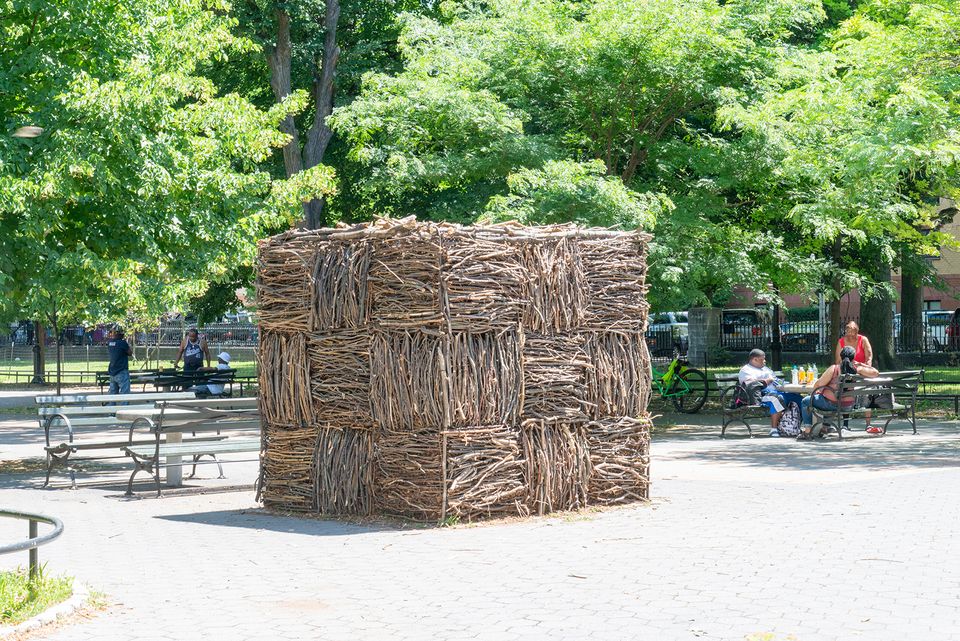 Maren Hassinger: Monuments (until 10 June 2019), organised by The Studio Museum in Harlem, at Marcus Garvey Park

Site-specific sculptures constructed out of branches pruned from trees in other New York City Parks have been installed around Marcus Garvey Park by the Harlem-based artist Maren Hassinger. The works were a collaborative effort, she says, with 75 volunteers from the community contributing their physical labour as well as their ideas. This result of this (re)cycling of material and landscape are eight massive, abstract pieces that respond to, resist and reimagine the horticulture and architecture that surrounds them. The project is part of inHarlem, the Studio Museum’s off-site programming focusing on community engagement while their new galleries are under construction. 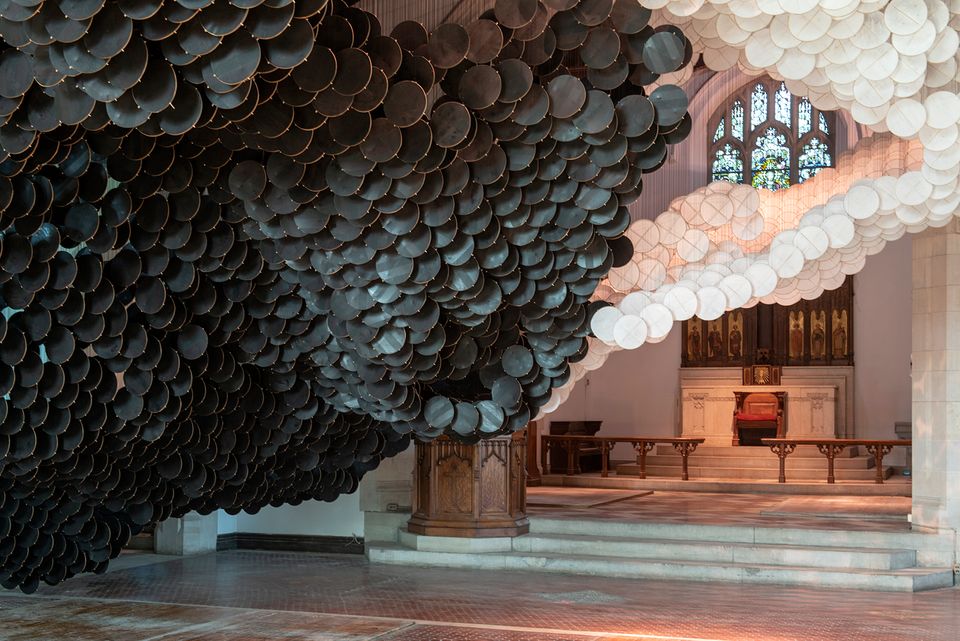 Jacob Hashimoto, The Eclipse and Never Comes Tomorrow (until 31 October), commissioned by the Trust for Governors Island, at St Cornelius Chapel and the Liggett Hall Archway

Hundreds of rice-paper kites in black and white make up the New York artist Jacob Hashimoto’s monumental installation The Eclipse. Slightly revised from when it was first shown at the Palazzo Flangini at the Venice Biennale in 2017, the light catches the dangling black paper circles to reveal a subtle sheen of the American flag screen printed on top, a haunting and heavy dark cloud. The artist’s more upbeat work Never Comes Tomorrow, is installed in the nearby archway of Liggett Hall, made from wooden cubes and pipes like some kind of fantastical wind instrument. 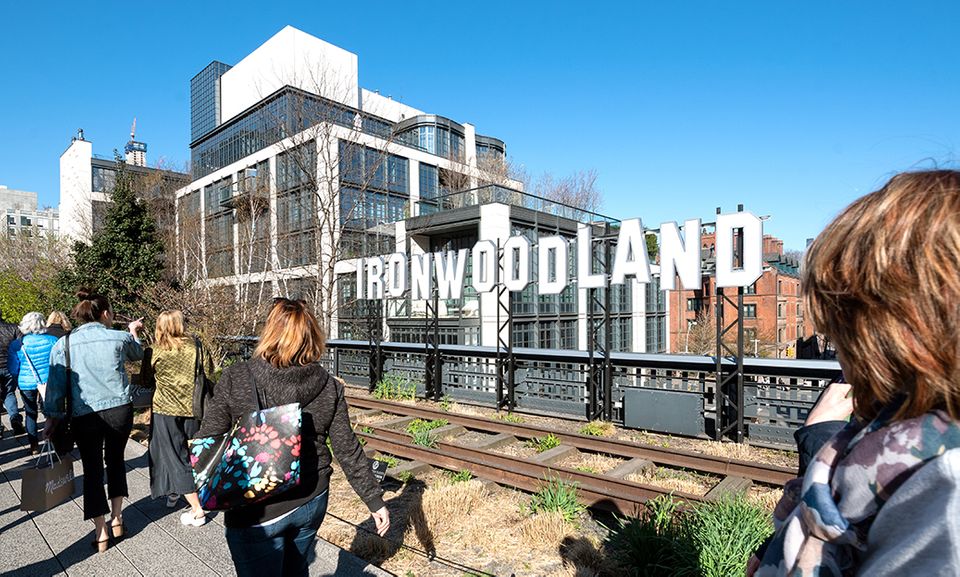 Nine artists from South America, North America, Europe and Central America have taken over the High Line, the Meatpacking District’s popular elevated park, drawing the casual strollers’ attention to serious social and political issues, ranging from last year’s forest fires in the northwestern coast of the US to imperialism to the prison industrial complex to women’s rights. The show includes a few text-based works, including two in neon—Pope.L’s green and red RiGT TURN for REPARATIONS and Andrea Bower’s orange and green Somos 11 Miliones/We Are 11 Million—and Sable Elyse Smith’s block-lettered C.R.E.A.M., named after a Wu Tang Clan song and referencing southern California’s state prison while also recalling the famous Hollywood sign. As the ancient Greek title prompts us to imagine, these works aim to turn the town square-like space of the High Line into a site for vigorous political, as well as artistic, debates. 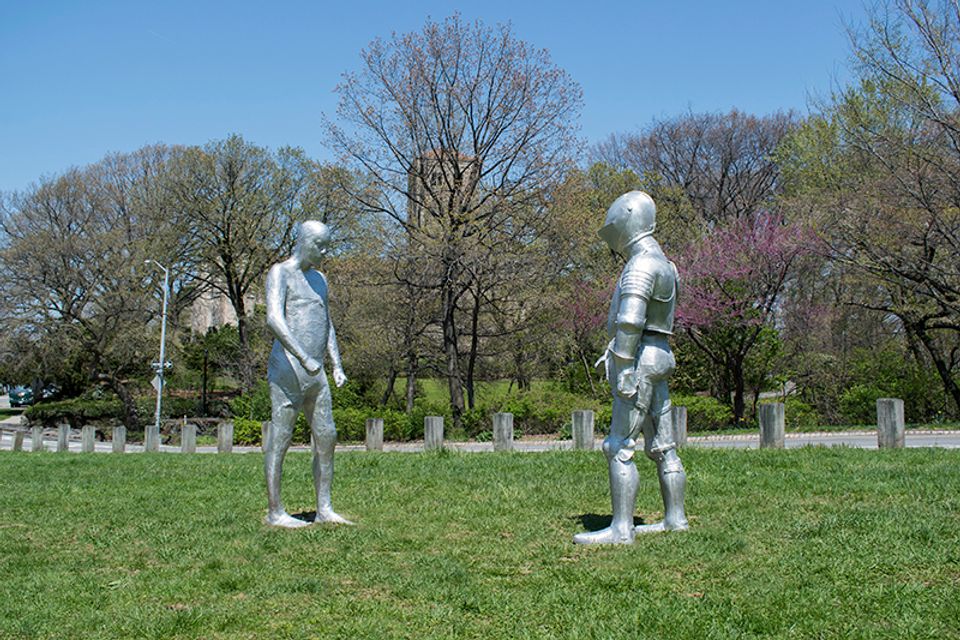 While the exhibition Heavenly Bodies takes up space inside the Metropolitan Museum of Art’s Upper Manhattan outpost for medieval art, a group of earthly bodies has landed at the Cloisters Lawn, in the Icelandic artist Steinunn Thorarinsdottir’s public work. The project places Thorarinsdottir’s typical nude, androgynous life-sized figures, based off the body of her son, face-to-face with replicas of 16th-century European suits of armour selected from the Met’s collection. They have been 3D scanned by the museum’s imaging department and cast in the same aluminium as the human figures. Unlike in a museum setting behind glass, where the armour’s original purpose is somewhat lost, the artist says, these “are actual firm, cast sculptures that people can approach, touch and feel the tension between the armour and the naked vulnerable human being opposite.” 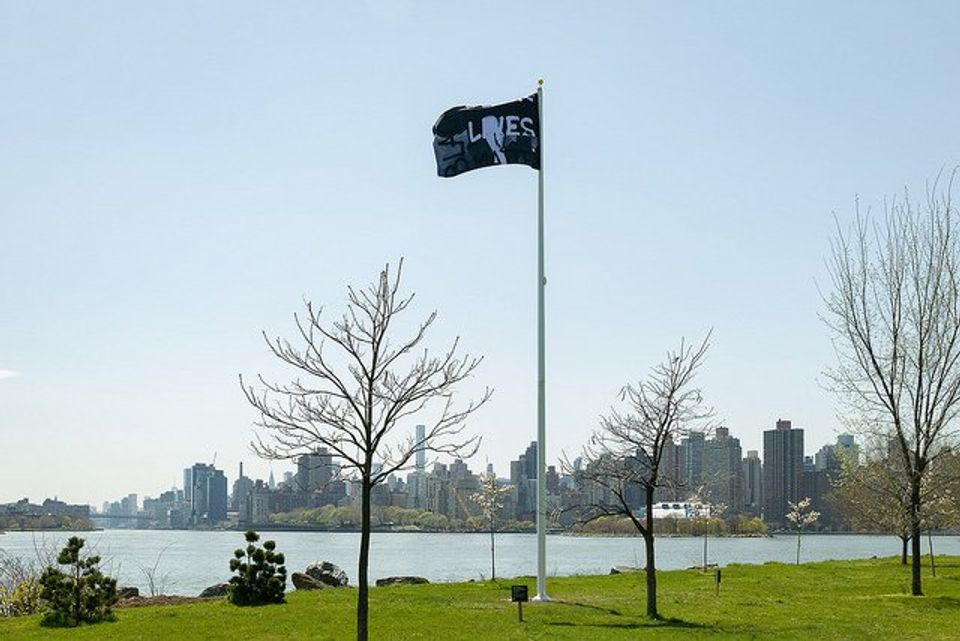 Still flying high since the Frieze New York tent came down, Adam Pendleton’s Black Dada Flag (Black Lives Matter) remains on the southern tip of Randall’s Island. This is the second in a series of the banners, the first of which was commissioned for the Venice Biennial in 2015 following the death of Treyvon Martin, which in part sparked the Black Lives Matters movement. The one waving in the wind today is a larger version and takes on a new significance at its current site—once known as Negro Point. 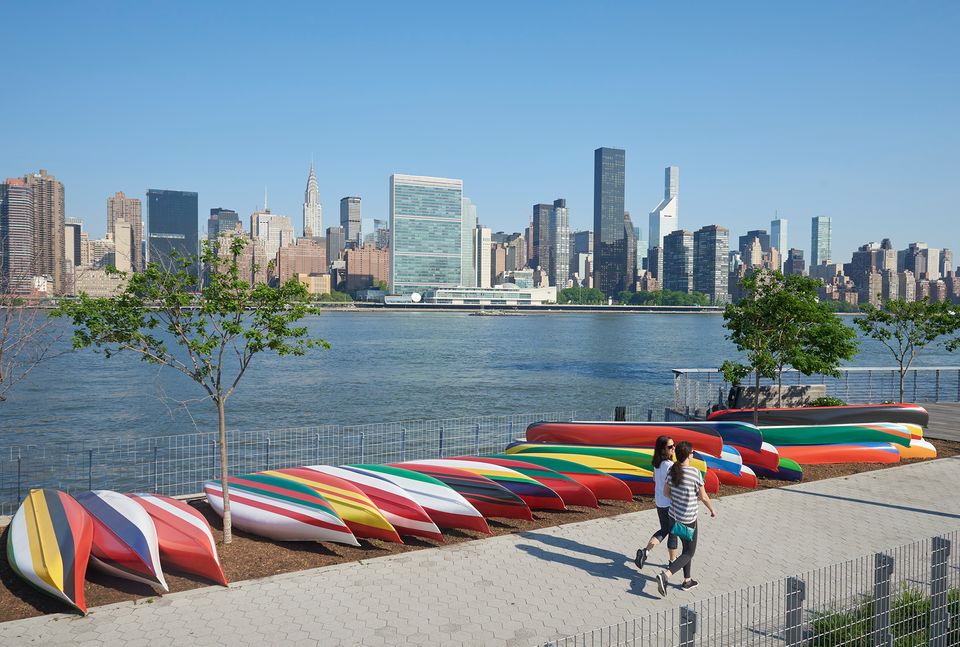 Colourful canoes line the shore of the East River, but these will never grace the water. Instead the aluminium boats in the New York-born artist Xaviera Simmons’ installation borrow their colours from the national flags of the many immigrant communities in Queens, the city’s most diverse borough. The commission takes on a poignant relevance in the light of the Trump administration’s rapidly shifting and increasingly hardline immigration policy. 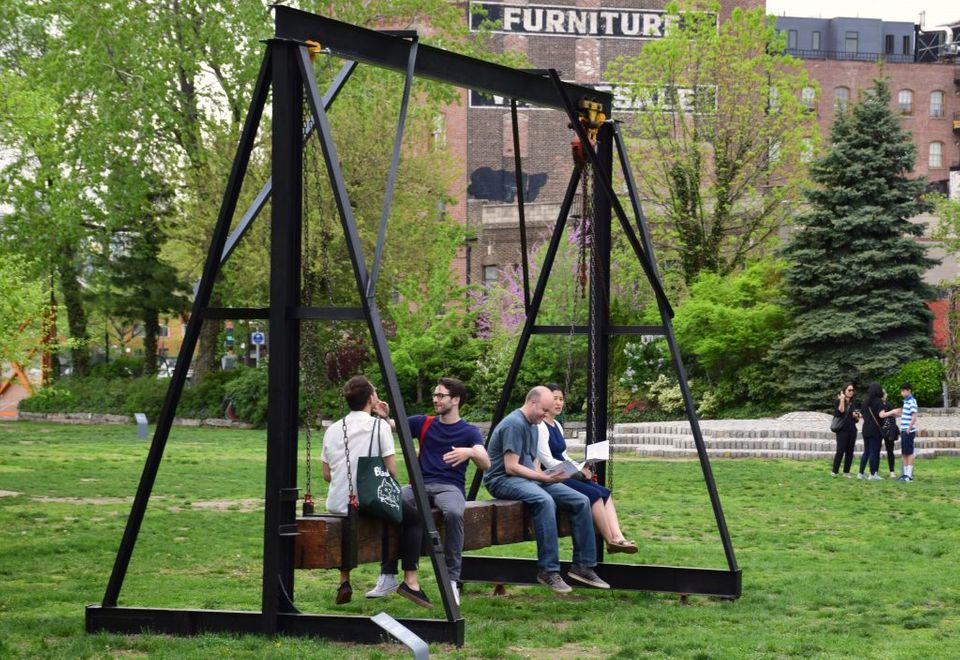 The Socrates Sculpture Park has a new fountain in the form of a pick-up truck. In Untitled (Late Bloomer) (2018), one of the artist Virginia Overton’s ten sculptures on view all summer, water fills and flows through the back of the transformed truck, while lotus blossoms float on the surface. And the massive Untitled (Suspended Beam) (2018), turns a reclaimed pine beam into a swing fit for a group. 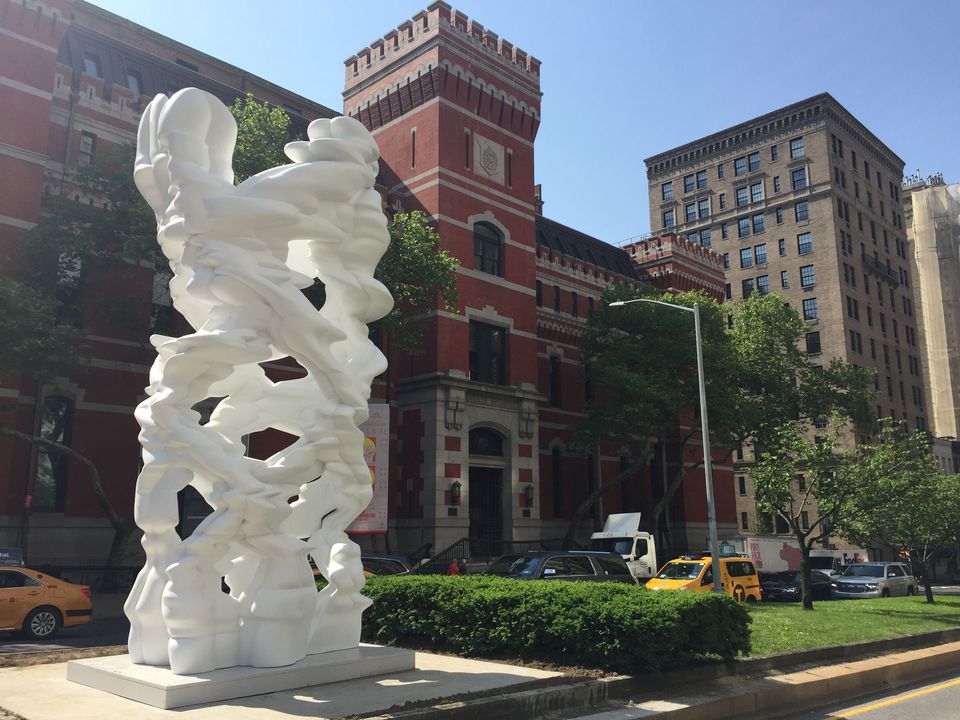 Tony Cragg: Monumental Sculptures (until 31 October), organised by the Fund for Park Avenue and Marian Goodman Gallery, on the Park Avenue Mall

Towering, teetering sculptures by the Turner Prize winner Tony Cragg have taken up residency for over 20 blocks uptown. Two bronze, two fiberglass and one stainless steel structure all seem to defy gravity, punctuating the Park Avenue Malls with a bit of levity.