The Greeks in Egypt: on Sunken Cities at the British Museum

The exhibition explores the interactions between two great civilizations

Two thousand years ago, Thonis-Heracleion and Canopus, two cities on Egypt's Mediterranean coast, were thriving cultural melting pots. Traders from the Greek world and the Levant flowed into the cities' ports with goods, ideas and religious beliefs. The Egyptian god Osiris, king of the blessed dead, was celebrated along with the wine-loving Greek god Dionysus, among many other deities. In both cities, as elsewhere in Egypt since the 650s BC, Egyptian and Greek cultures slowly fused, an evolution best represented by the flourishing cult of Serapis—a hodgepodge deity combining various Greek divinities and the Egyptian god Osiris-Apis.

Nothing lasts forever. By the 8th century, Thonis-Heracleion and Canopus had sunk beneath the waves of the Mediterranean. Centuries passed and the locations of both cities were forgotten. It wasn't until the mid-1990s that archaeologists rediscovered them and began to raise their monuments and artefacts—many extremely well preserved—from the seabed. Over successive years of exploration, remnants of daily life, objects of ritual significance and spectacular colossal statuary returned to the surface.

Sunken Cities: Egypt's Lost Worlds, the British Museum's latest Egypt-centric exhibition, presents the rediscovered treasures of Thonis-Heracleion and Canopus and uses them to tell the wider story of Egypt's contact with the Greek world. To provide additional context, artefacts from the British Museum collection and loans from the Egyptian Museum in Cairo and the Graeco-Roman Museum in Alexandria supplement those recovered from the sea. Of the 300 artefacts on display, spread across five themed sections, 200 were raised from the seabed in the past 20 years.

Upon entering the exhibition, visitors are immersed in a darkened space punctuated by blue light. The relaxing sounds of synth and gurgling seawater fill the air. It's a bit like walking into a themed spa. Whatever your feelings on this, you are soon swept along in the current thanks to the show's first showstopper: a colossal, five-and-a-half metre statue of Hapy, god of the Nile Flood, who greets visitors, just as he once met traders arriving at Thonis-Heracleion.

After Hapy, the exhibition turns to Egypt's Late Period, during which Greek traders and mercenaries were particularly attracted to the region. A gravestone from Saqqara (near modern Cairo) neatly represents this phase: commissioned by a Carian mercenary for his wife, it depicts Osiris, Isis and the sacred Apis bull alongside a Carian inscription and a Greek-influenced scene of mourners standing around a bier. It also shows Carians cutting their foreheads during the funeral according to Carian tradition. Artefacts like these show that, despite having only recently left their homes in western Turkey, the Carians, like other foreign groups entering Egypt, quickly integrated into Egyptian society but did not completely abandon their traditions.

In the next section, Alexander the Great swiftly comes and goes, represented by a bust, a silver coin and an intriguing water clock. One of his chief generals, Ptolemy, left behind a more lasting legacy: as King Ptolemy I, he founded the Ptolemaic Dynasty. Gold coins of Ptolemy I, unearthed at Thonis-Heracleion, reflect the city's daily grind, while two royal heads (one rather chubby) represent the new ruling dynasty's interest in presenting themselves as pharaohs: each wears a traditional nemes-headcloth and a royal uraeus. Nearby, an elegant statue of a queen dressed as the goddess Isis strides forth in a traditional Egyptian pose, wearing a tight-fitting pleated dress, her hair arranged in Greek corkscrew locks. There is a similar unifying approach in the finely-carved statue of Queen Arsinoe II from Canopus, which is one of the exhibition's true masterpieces. Here, the queen, wearing a transparent dress tied with an Isis-knot, is fused with Aphrodite, a Greek goddess often associated by the Egyptians with Isis. 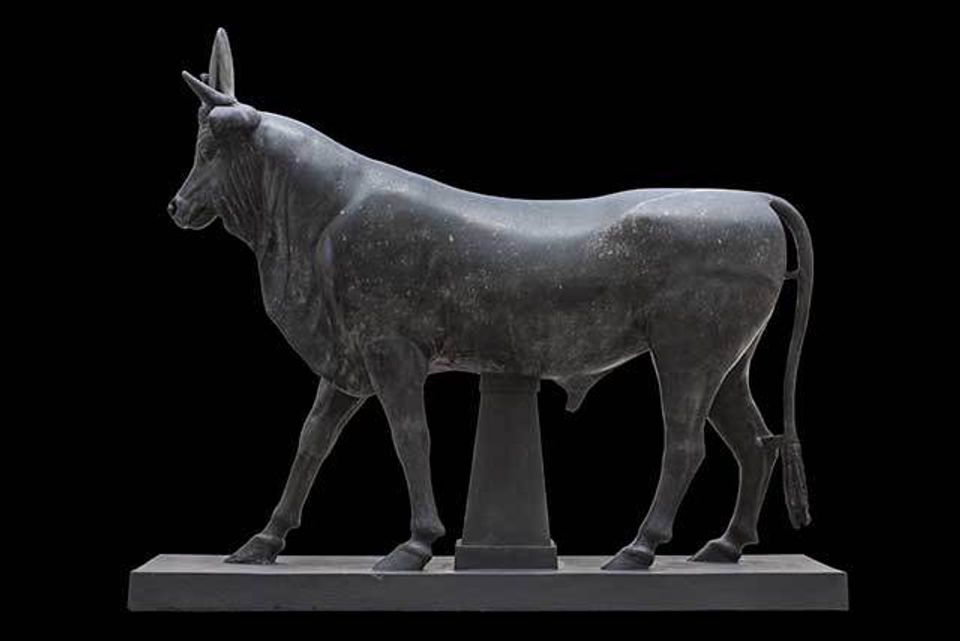 From this point onwards, the remainder of the exhibition is largely dedicated to religious life at Thonis-Heracleion. The shrine of Amun-Gereb, although not the most aesthetically impressive monument on display, was among those that held the most religious significance to the ancient Egyptians. Gold jewellery, including a ring displayed nearby that bears both Egyptian and Greek influences, was probably left as an offering at this shrine. Dominating this part of the exhibition, just as they once dominated the entrance to the temple of Amun-Gereb, are colossal statues of a Ptolemaic king and queen.

Afterwards, however, Osiris takes centre stage, with artefacts—many loaned from the Egyptian Museum in Cairo—illustrating his myth and importance. Highlights include finely-carved basalt statues of Osiris and Isis; a limestone statue of Isis kneeling, with a tiny effigy of Osiris across her knees; and, on a far grander scale, a diorite representation of Osiris lying on his funerary bed. It's all very impressive—certainly among the most impressive sections of the show—but you may wonder if you've walked into a different exhibition by mistake. Where has all the underwater archaeology gone?

The reason for this unexpected Osirian interlude is to prepare visitors for the next section, which is dedicated to the Mysteries of Osiris, an annual festival celebrated at every major Egyptian temple-city during the 1st Millennium BC. The excavation at Thonis-Heracleion revealed ritual equipment and offerings from this celebration, among them lead model boats and oil lamps. The excavation team also discovered a sunken barge, once used to transport two sacred images of Osiris during the festival. It remains on the seabed, but a full-size image adorns the exhibition floor.

The exhibition's final section is dedicated to how Egyptian-Ptolemaic culture spread across the Roman world. One eye-catching artefact here is the offering of a foot made of marble. It once stood in the Temple of Ras el-Soda in Alexandria as an offering left by a man named Isidoros to Isis or Serapis. Isidoros had injured his leg in a chariot crash and dedicated the foot as thanks for his leg healing. Two sphinxes from Alexandria close the exhibition. They probably once lined the path leading to the Temple of Isis on the island of Antirhodos—part of the city's royal quarter—so you can imagine yourself as Cleopatra or Mark Antony as you stroll past them (into the gift shop, rather than your palace).

With only a few exceptions, the (sometimes glowing) labels in Sunken Cities provide just the right amount of information to keep the narrative flowing. The inclusion on some panels of scenes from Egyptian temples and tombs, illustrating how certain objects were used—for example the Garden Tank—is a welcome addition, as are the dramatic images of some of the monuments in situ underwater. There's also a good array of activities and panels for children: bright orange cases invite young visitors to listen to the sound of the sea while observing the objects, or to use a torch to highlight hieroglyphic symbols, or even to learn how to signal each other underwater.

The exhibition is also cleverly organised. A majestic piece catches your eye at every turn, so that as you ponder the smaller artefacts—ones that are less flashy, but provide a more relatable connection with the people of Thonis-Heracleion and Canopus—you know that there'll be something monumental around the next corner. It all adds up to an immersive, educational and enjoyable experience. Like many blockbusters, however, the story does not completely hold together under scrutiny. The section on Osiris feels tacked on for the sake of showiness, and it isn't clear why one third of the objects in this show about sunken cities come from non-submerged sites. Still, by the end of the show, you've seen your favourite ancient cultures unite, and enjoyed a combination of spectacular moments interspersed with quieter periods of emotional resonance.

But most importantly—and more seriously—Sunken Cities demonstrates how different cultures can come together to create something at once unique, familiar and new. In this way, the exhibition neatly complements the British Museum's other current show, Sicily: Culture and Conquest. Although each deals with a different place and time, they both emphasise how people from different cultures can share a space and work together. In our increasingly troubled times, with the rise of intolerance and xenophobia worldwide, this is a powerful message.

Garry Shaw gained his doctorate in Egyptology from the University of Liverpool. He is the author of four books, including The Egyptian Myths: A Guide to the Ancient Gods and Legends (2014), and, as a part-time tutor, teaches an online course in Egyptology for the Oxford University Department for Continuing Education. He is currently writing a book on ancient Egypt's interactions with the wider world