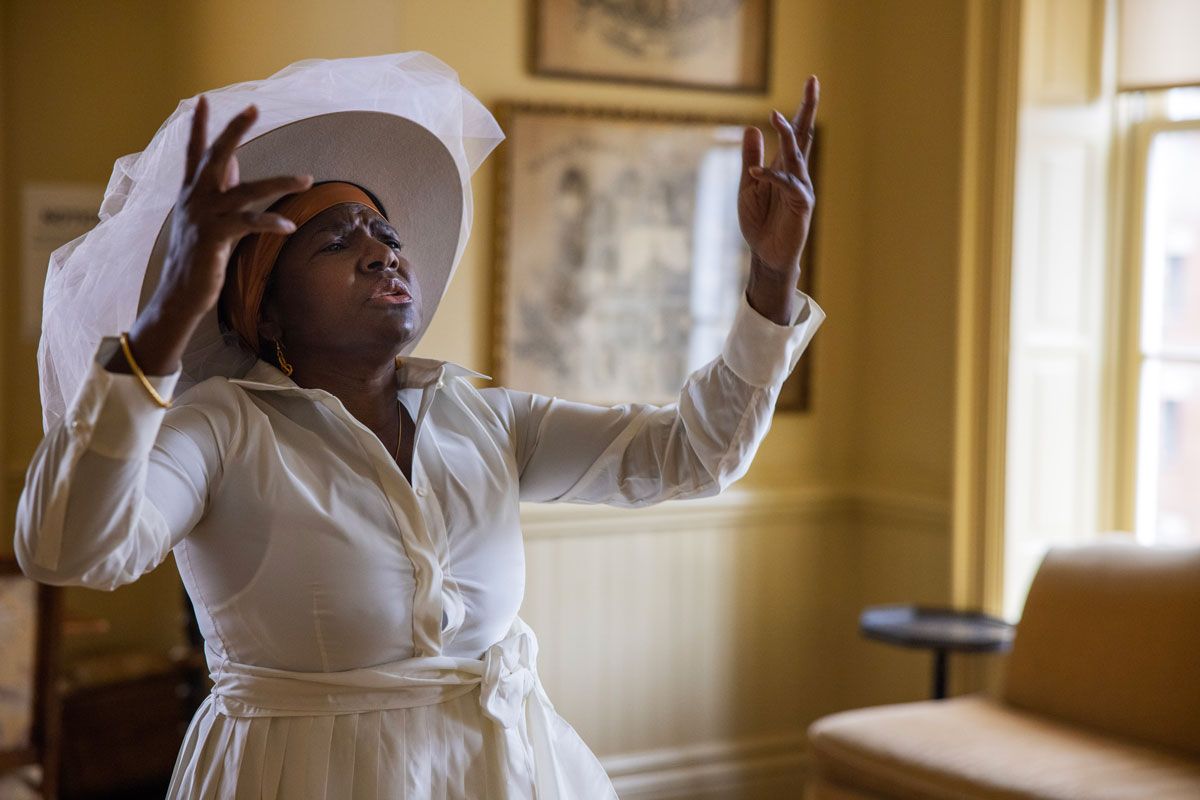 Maria Magdalena Campos-Pons in a still from When We Gather Photo: Tommy Oliver

When Kamala Harris addressed the nation on November 7 after being declared the first woman and woman of colour elected vice president, she summoned in gratitude the memory of her mother and the generations of women in the nation's history who paved the way. Inspired by Harris’s historic achievement and her invitation for collective celebration, seven women artists of colour have responded with a multi-pronged artwork presented by Creative Time titled When We Gather.

Premiering on inauguration day, 20 January, at www.whenwegather.art (and remaining viewable through 15 February), a three-minute film weaves together a multi-generational circle of women. This tapestry of performance, music, poetry and photographs through history lands on a beaming portrait of Harris as a call for women to heal and unite the country. An interactive companion programme on the website contextualises the imagery through interviews with the participants and invites viewers to join the circle by uploading their own quick videos in response to simple prompts.

The piece is the vision of the Afro-Cuban artist María Magdalena Campos-Pons, 61, who immigrated to the US in 1991 as a young woman, just as the vice-president elect's mother Shyamala Gopalan Harris came from India at 19. “I, too, had a mother who envisioned better things for me and I came to America as a result of her pushing me to dream larger than she could do,” says Campos-Pons, professor of fine arts at Vanderbilt University in Nashville, whose multimedia installations are often centered on the interconnectedness of women.

On the day the election results were called, Campos-Pons dreamt of a circle of women in white, of every ethnicity and age, dancing around the White House—an image referencing a Yoruban ritual from her childhood where women would cleanse and prepare a path forward for whatever was to come. Within a day, she corralled her friends Okwui Okpokwasili, a performance artist, and LaTasha N. Nevada Diggs, a poet and sound artist, to collaborate and had the backing of her gallerist Wendi Norris as executive producer. They were joined by the artists Dell Marie Hamilton, Jana Harper, Lisa E. Harris, and Samita Sinha, bringing the number of performers to seven—significant in Campos-Pons's work as a reference to the seven powers in the Yoruba religion. 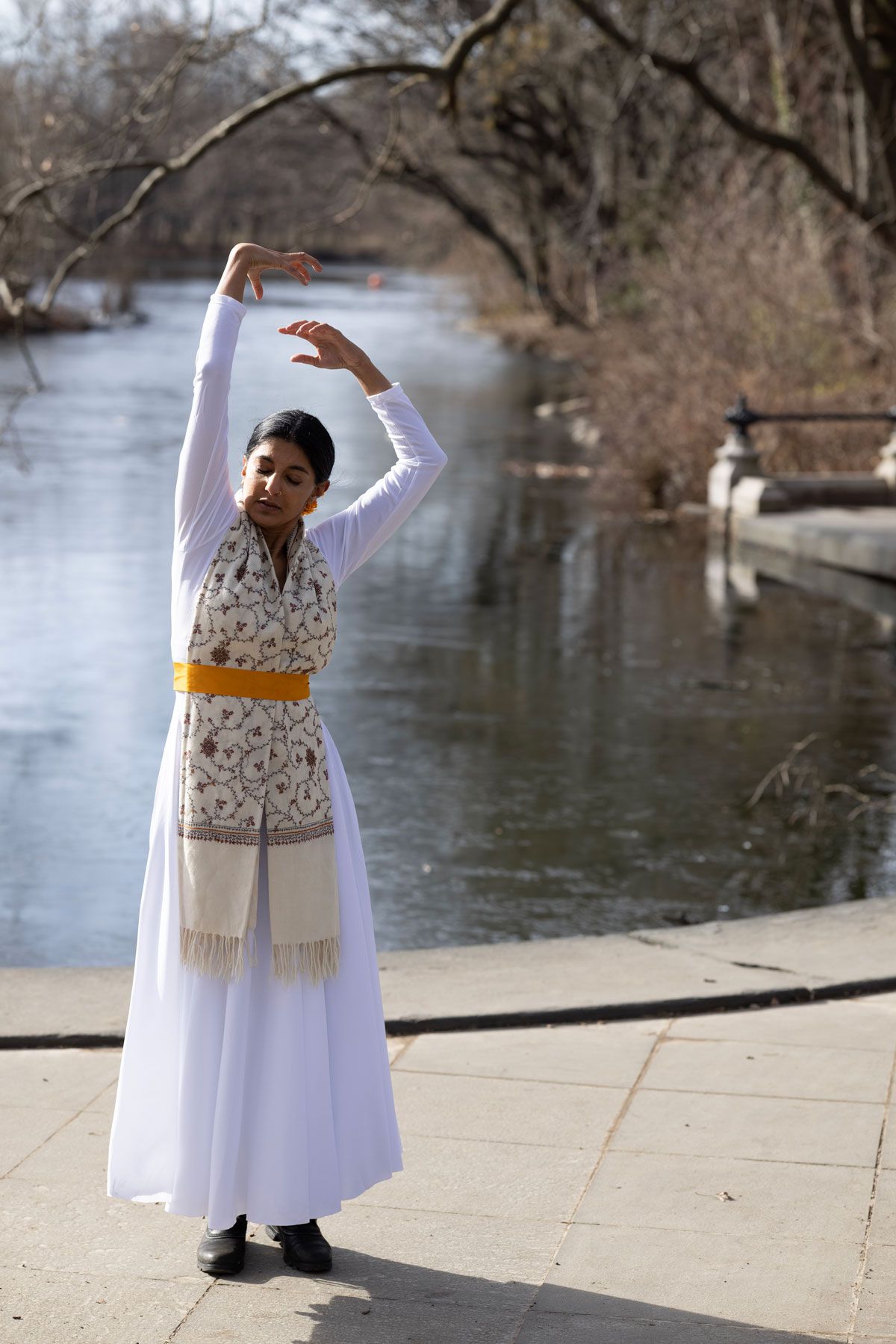 Samita Sinha in a still from When We Gather Photo: Tommy Oliver

With pandemic and security restrictions making a performance at the White House unfeasible, they quickly pivoted to the idea of a film. They signed on Codie Elaine Oliver as director, who co-created the docuseries “Black Love” and is Harris's younger sorority sister at their shared alma mater Howard University.

At locations across multiple cities, including Prospect Park in Brooklyn, Fisk University in Nashville and an amphitheater in Houston, Oliver separately filmed each of the seven artists wearing white garments to evoke the suffragists and moving in a circular choreography scored by Okpokwasili—at first slow and meditative, then picking up speed.

“This simple gesture of circularity is a symbol of unity and continuum,” Campos-Pons says.

In editing, Oliver merged the performances, interwoven with images of women through history and overlaid with a poem written by Diggs and narrated by the actress Alfre Woodard. She evokes a young girl's immigrant journey and majestically intones to “make way for industrious ladies... the house needs a cleaning.”

Is the film's message unrealistic, given the inauguration it aims to celebrate is under threat from the same forces that attacked the Capitol earlier this month? Norris, who secured funding from the Ford Foundation among others and plans to tour the project to museums and universities, believes it can provide a common ground.

“I hope it will create dialogue about how we can come together and do something as simple as honoring our ancestors,” Norris says, “taking a moment to reflect on how we want to move forward, no matter how we voted.”