The National’s 'sweetest song': how Ragnar Kjartansson convinced US rock band to play a song repeatedly for six hours 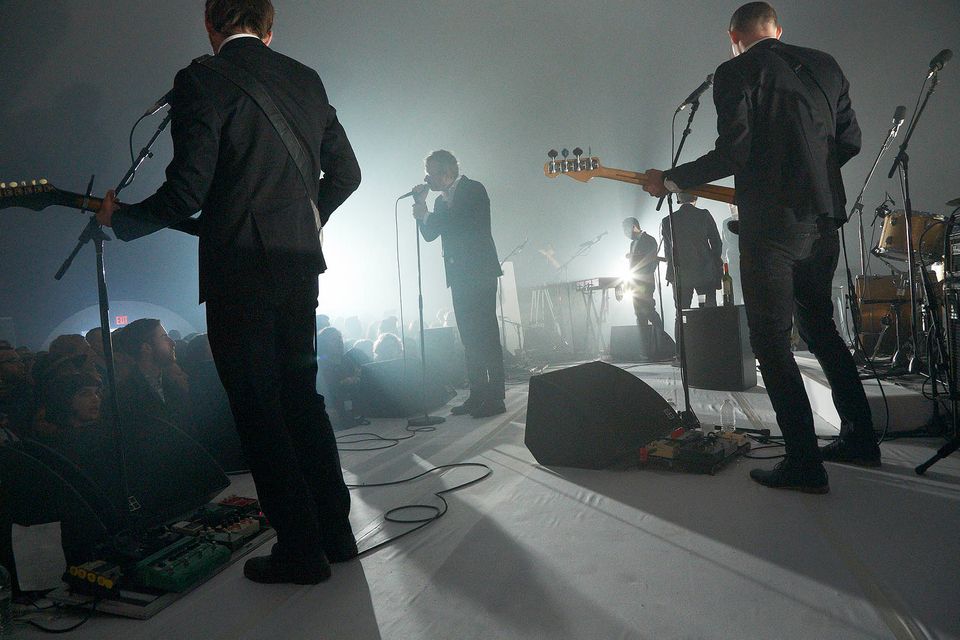 Ragnar Kjartansson and The National, A Lot of Sorrow (2013-14) Photo: Elisabet Davids Courtesy of the artists, Luhring Augustine, New York and i8 Gallery, Reykjavik

When the Icelandic artist Ragnar Kjartansson was a teenager, he grew up listening the UK post-punk, gothic-rock band The Cure. On the back of their album Wish was a quote from Percy Bysshe Shelley: “Our sweetest songs are those that tell of saddest thought.”

On the latest podcast from The Art Newspaper, a special themed around the Frieze art fairs and the big London shows timed to coincide with them, Kjartansson suggests that this may have prompted a whole strain of his work as an artist. “Maybe it’s that simple—because I was listening to The Cure as a teenager, sorrow has always been a thread in my work,” he says. “The notion of melancholia creates something that makes me happy, in creating. It’s a feeling that I’m always searching for in my works.”

His best known work reflecting this is A Lot of Sorrow (2013-14), which is currently on display in London as part of Strange Days: Memories of the Future, the New Museum’s pop-up exhibition of 21 video works at the Store X on the Strand. The film captures the US rock band The National as they play their song Sorrow for six hours, in a live performance at MoMA PS1 in New York.

“When I had the idea to do the piece, I had already listened to the song maybe 800 times,” Kjartansson says, “while doing the dishes, while taking a walk, while travelling in my car. The song—and the whole album, High Violet—really became the soundtrack of my life.” Kjartansson turns to another literary quote to define The National song’s bittersweet effect. “Victor Hugo said that melancholy is the joy of being sad. There’s something so sad and beautiful and heartfelt about [Sorrow], but also it’s joyful.”

Kjartansson tells us on the podcast that it was “weirdly easy” to convince The National to play their song between noon and 6pm on 5 May 2013—they ended up playing it 108 times. The artist is used to his crazy ideas being rejected. “In this case it was, like: ‘Yes, yes, we’re up for it.’ Right away.” But it had to be Sorrow, he says. “They were totally up for it, because musically it made so much sense to them: the song has this circular repetition within itself, it’s like a song that can go on forever.”

But it’s not just the song’s circular form that made the band respond positively to the suggestion. As the singer Matt Berninger told the Guardian in 2013: “The humour of melodrama, the humour of wallowing, is definitely something that is in almost all of our songs. I think some people focus on the sadness or the melancholy but there's also a lot of silliness in there.”

Kjartansson praises Berninger’s writing. “It’s this really sad thought, but it’s so well said,” he says. “Lines like: ‘Sorrow’s the girl inside my cake.’ And: ‘It’s in my honey, it’s in my milk.’ Matt Berninger is such a really good poet, actually, I consider him a poet.” Kjartansson feigns snobbishness: “I mean, although he’s just a pop musician.” How appropriately silly.

You can hear The Art Newspaper Podcast in all the usual places where you find podcasts including iTunes, Soundcloud and TuneIn. This edition also features interviews with Massimiliano Gioni, who curated Strange Days; the artists Doris Salcedo and Ipek Duben; and with Melanie Gerlis, who reviews this year’s Frieze fairs and the state of the art market in the UK.

Ragnar Kjartansson’s The Long Sorrow is in Strange Days: Memories of the Future at the Store X, London, until 9 December.