Andy Link says sculpture for which he demanded £5,000 in ransom was later stolen from him. Banksy’s former dealer says otherwise 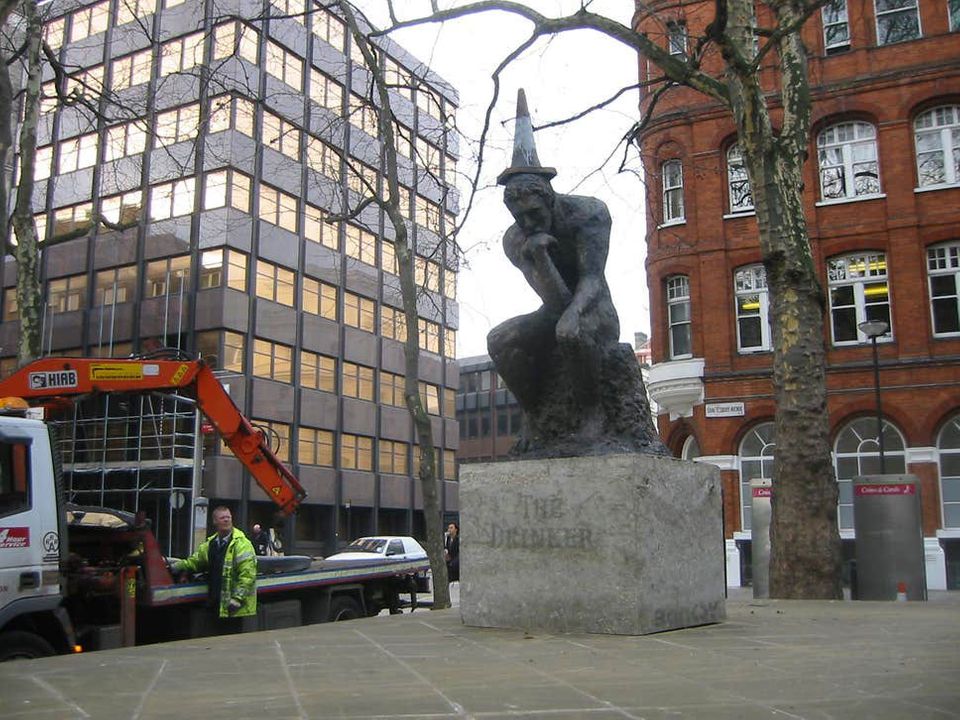 A British artist is claiming ownership of a Banksy sculpture he removed from the street in 2004, but was later “liberated” from his garden and is now up for sale at Sotheby’s with a £1m price tag.

Andy Link, who also goes by the name AK47 and is the leader of an art group called Art Kieda, “kidnapped” The Drinker from its plinth in Soho, central London almost 15 years ago, thrusting both artists onto the front of tabloid papers. The 12ft mixed media sculpture, which at that time was valued at £25,000, is a riff on Rodin’s The Thinker—instead of a figure hunched deep in philosophical thought, Banksy depicts a man seemingly collapsed in a drunken slump, with a traffic cone on his head.

Around a year after he took the work, Link says he registered his “find” with police and contacted Banksy, asking for a ransom of around £5,000—or an original canvas—“to cover costs”. Link says: “I thought I was the owner, nobody else put in a claim for it.”

Link says the sculpture was then “stolen” from his garden in 2007. But Banksy’s former dealer Steve Lazarides, from whom the current owner acquired the sculpture in 2014, according to Sotheby’s catalogue, says Link’s claims to ownership are unfounded. “It’s like crying that the bigger boys have stolen his ball,” he says. 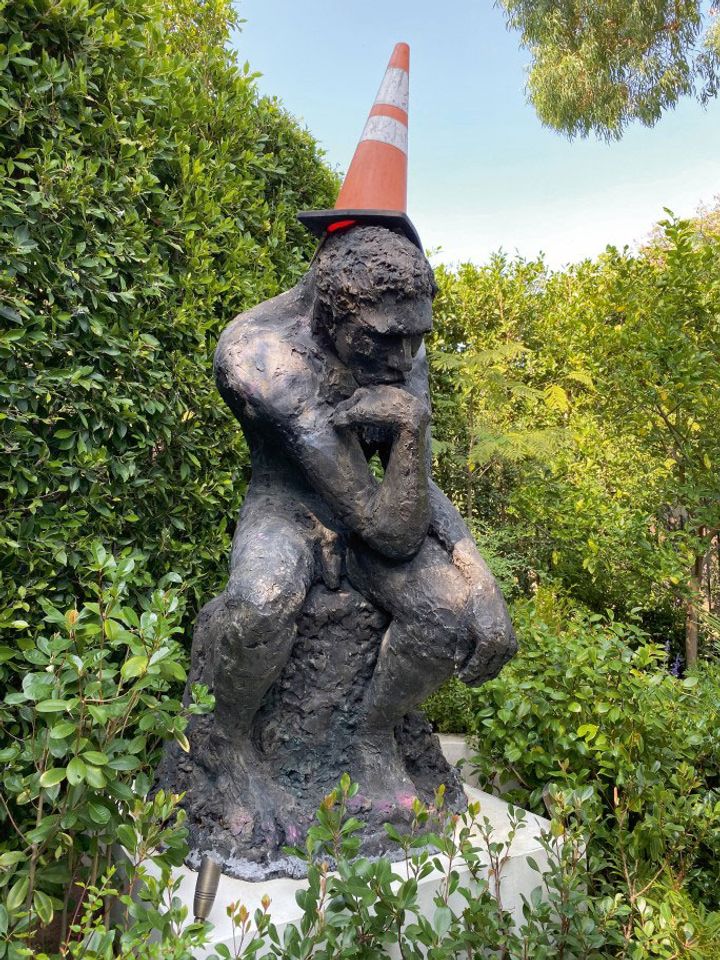 In his forthcoming book, Banksy Captured, Lazarides describes how Banksy was “livid” about Link’s ransom. “Tell him I’ll give him enough money for petrol and matches and he can fucking burn it for all I care,” was Banksy’s response, according to Lazarides.

The demand, “the kind you see in the movies with letters cut out of magazines and newspapers”, was sent to Lazarides together with an ear cut from the sculpture. “Around then I was getting a huge amount of weird mail for Banksy, and would regularly throw it all in the bin,” Lazarides says, so he ignored it.

Many months later, “associates” of Lazarides informed him that they had located The Drinker “in a back yard in the east end of London”. According to Lazarides, one man “had been filling his boots with a young lady and had spotted it out of the bedroom window”. While Link was away, a team of people “liberated” the piece, leaving the traffic cone, which Link still has.

Lazarides says a deal was then struck between him, Banksy and “the London crew” over ownership, and Lazarides agreed to store the work.

Around eight years later, during which time Lazarides was told “the piece had been traded and was actually now the property of a different team of northerners”, he received a call from the new owners who wanted to collect the work. After the storage costs were settled, Lazarides released the sculpture. “That was the last time I came into contact with this statue,” he says.

Link says the Sotheby’s sale is the first he has heard of the work’s whereabouts in 12 years. The sale catalogue describes the sculpture as having been “mysteriously retrieved from Art Kieda’s lock-up in an anonymous heist”.

In a statement, Sotheby’s says it is “satisfied that the seller has a legal right to put the piece up for auction” and has consulted both the Metropolitan Police and the Art Loss Register “as part of our pre-sale due diligence”. The Met says it “does not have an active criminal investigation into this matter”.

The work is being sold with a certificate of authenticity, which Banksy’s handling service Pest Control issued in 2008.

Whether the sculpture’s backstory will boost its price in London tomorrow remains to be seen. Sotheby’s bills the work as “among one of Banksy’s most ambitious sculptural endeavours to date”, a viewpoint not shared by all.

Lazarides describes The Drinker as “a fucking monstrosity, and the worst sculpture he ever made”. Could Banksy be of the same opinion? “I think this might actually be one thing we agree on,” Lazarides says.