Alexandre Lenoir, the founder of the Musée des Monuments Français 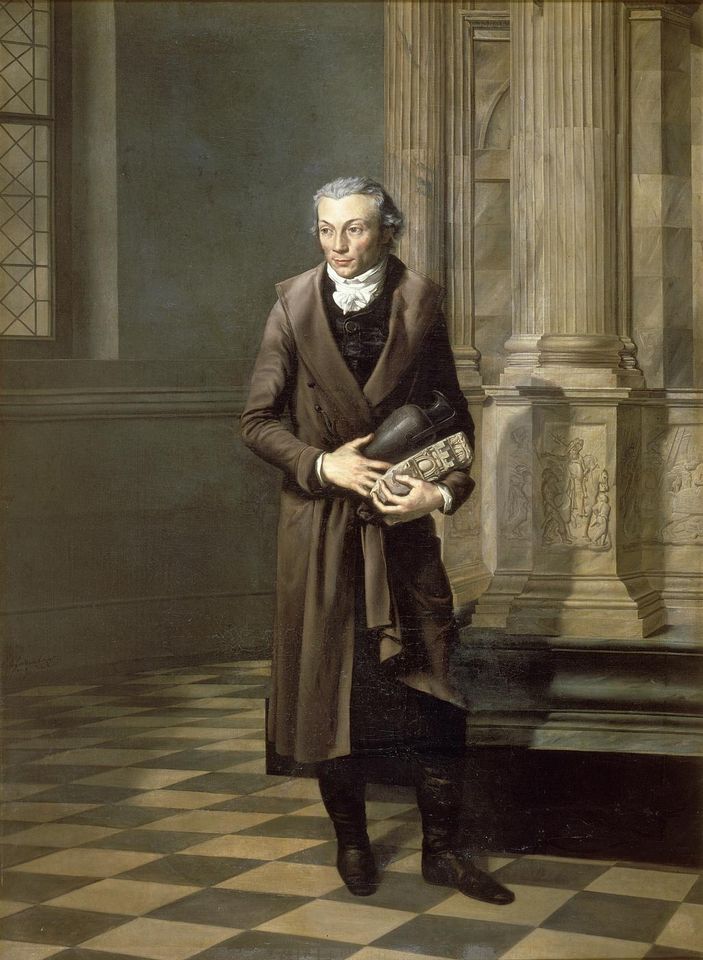 Alexandre Lenoir in a painting by Delafontaine Pierre Maximilien

1793, the French Revolution’s year of terror, saw, paradoxically, the creation of a museum. At that point the revolution took a radical turn, and rage against the ancien régime flared up in the destruction of everything associated with feudal rule. The basilica of Saint-Denis, the resting place of the French kings, incurred severe damage: monuments were smashed to pieces and the treasury emptied. But a contemporary print shows a man resisting the vandals—heroically but apparently in vain. He stands at the centre of the composition and is the only identifiable individual: Alexandre Lenoir (1761-1839). In Saint-Denis he was battling to realise his plan to bring together in a single location the French historical monuments that were endangered, damaged or already dispersed, to protect and preserve them.

Lenoir did indeed become the curator of the paintings and sculptures brought together in the Couvent des Petits-Augustins after the Parisian parishes had been dissolved. From this he created what was two years later officially confirmed by the National Assembly as the Musée des Monuments Français, the Museum of French Monuments. Gradually Lenoir organised the four wings of the building, arranged around a cloister, as a coherent museum, with a room devoted to each century from the 13th to the 17th (he condemned the 18th century as a period of decline culminating in the Revolution).

Earlier this year, the Louvre devoted an exhibition to Lenoir and produced a comprehensive publication, Un Musée révolutionnaire: Le musée des Monuments français d’Alexandre Lenoir, highlighting the uniqueness of the museum he founded. The importance of Lenoir’s rescue operation is beyond question. Yet Lenoir stands alone in the intellectual landscape of his age, which was defined by the classicism of Winckelmann and his like. Lenoir valued Winckelmann too; yet he was anything but doctrinaire. Lenoir took in such sculptures and fragments as came his way—as the dramatic depiction of events in Saint-Denis cathedral shows. He arranged the salvaged pieces housed in his museum in a way that was described, critically, in the Journal de Paris in 1797 as “une collection magnifiquement confuse, poétiquement désordonnée” (a magnificently confused, poetically disorganised collection). In the introductory essay the art historian and former Collège de France professor, Roland Recht, explains why Lenoir was branded as an outsider: his museum was competing with the Louvre for the status of national museum and Lenoir himself, as a self-taught man, was scorned by the emerging art-historical establishment.Lenoir did indeed arrange the treasures in his museum according to aesthetic criteria. With his enthusiasm for the Middle Ages he stands at the beginning of the Romanticism that prevailed in the Restoration period, with its longing for a mythical medieval world. Yet the criticism of Lenoir’s museum concept overlooks the fact that there was hardly any knowledge of French Medieval art at that time, let alone any awareness of how styles evolved. Lenoir, like Winckelmann whom he admired in this respect, saw art in terms of progress to ever greater heights, interrupted by the decadent 18th century. His museum was intended to serve as an example for the education of all citizens. And it is not just the French preoccupation with national heritage that has one of its roots in Lenoir’s activity, but also the emergence of national museums throughout Europe and elsewhere in the world.

Bernard Schulz is the art critic and literary editor of Der Tagesspiegel, Berlin