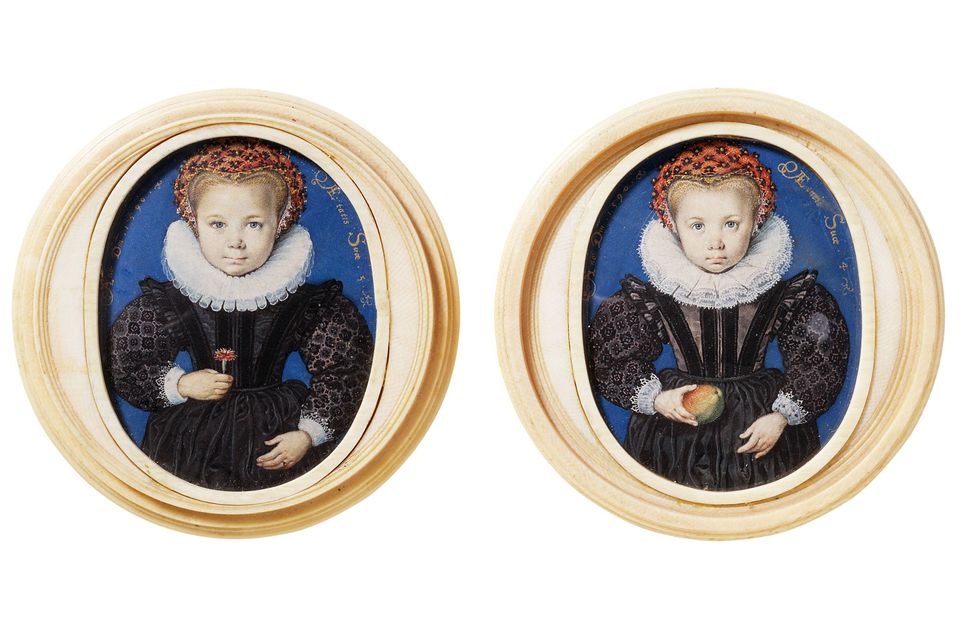 The cleaners will be working overtime in the National Portrait Gallery’s exquisite new show as visitors straining to take a closer look at the intricately detailed portrait miniatures, from the late 16th and early 17th centuries, bump noses and foreheads on the glass cabinets. Elizabethan Treasures: Miniatures by Hilliard and Oliver (until 19 May; tickets £10, concessions available), which opened this week, focuses on the work of Nicholas Hilliard and Isaac Oliver, two the most skilled limners—painters of portrait miniatures—of the Tudor and Jacobean era. The objects were prized by monarchs and courtiers and could be set into cases and worn. Many remarkable figures of the day were painted by the two artists, including Elizabeth I and some poignant examples of Henry, Prince of Wales, who died aged 18, as well as depictions of Walter Raleigh and Francis Bacon. But there also many whose identities are not known; among the most beautiful are a pair of portraits by Oliver titled Unknown girls aged 5 and 4 (1590). One of the girls holds a flower, while the other what is probably an apple, and despite the restricting dresses they are wearing, their expressions are as lifelike and mischievous as if they were painted today.

The Franz West exhibition at Tate Modern (until 2 June; tickets £11, concessions available) begins before you even step inside the gallery. West’s large sausage-like, candy-coloured Outdoor Sculptures—irreverent responses to pompous public sculpture—have been placed outside the museum’s entrance, accessible to all. There is always a risk in sacrificing the Austrian artist’s subversive sense of humour, so intrinsic to his work, to underline quite how important he was to 20th-century sculpture. The strength of this show—the UK’s first major West survey since his death in 2012—lies in emphasising that West’s greatest legacy is his rejection of playful interactions preventing serious contemplation of art. Accordingly, viewers are encouraged to play with recreations of West’s Passtücke—papier maché and found-object amalgamations. His love of collaboration and breaking institutional convention is acknowledged by having the British artist Sarah Lucas involved in curating the show, placing his so-called Legitimate Sculptures on appropriately stark breeze blocks and MDF plinths. A pink splatter from a paint-filled egg thrown by Lucas deftly mirrors a nebulous hanging pink blob in the last room–it’s silly but also considered, and almost certainly what Franz West would have wanted.

The British artist Phyllida Barlow’s sculptures are the perfect foil for the Royal Academy of Arts’ new(ish) Gabrielle Jungels-Winkler Galleries. Barlow’s distinctive sculptures—seemingly roughly hewn from materials such as cement, plaster, polystyrene, timber, spray paint and hessian scrim—fill the double-height, light-filled galleries and bring a bit of mischief to the near-pristine new spaces. The exhibition, titled Cul-de-sac (23 February-23 June; tickets £12, concessions available), opens tomorrow and consist entirely of new sculptures, some of which were completed in the space. Although not strictly representational, Barlow’s sculptures are certainly incredibly evocative: one looks a bit like an old rotting pier tipping into the sea; another like the tail of a fighter jet or is it a whale’s fluke as it sounds? The final work of the show, untitled: blockonstilts (2018-19), consists of three huge polystyrene block held up by timber stilts, with plaster slopped onto the joints and must have inspired one visitor to remark of the show: “It’s all a bit, sort of, H.G. Wells”. (Note, the exhibition is expensive for just three rooms—no fault of Barlow’s, the pricing for the shows in these new galleries seems rather steep. Best to make friends with one of the RA’s Friends, AKA members, who can take you in for free).