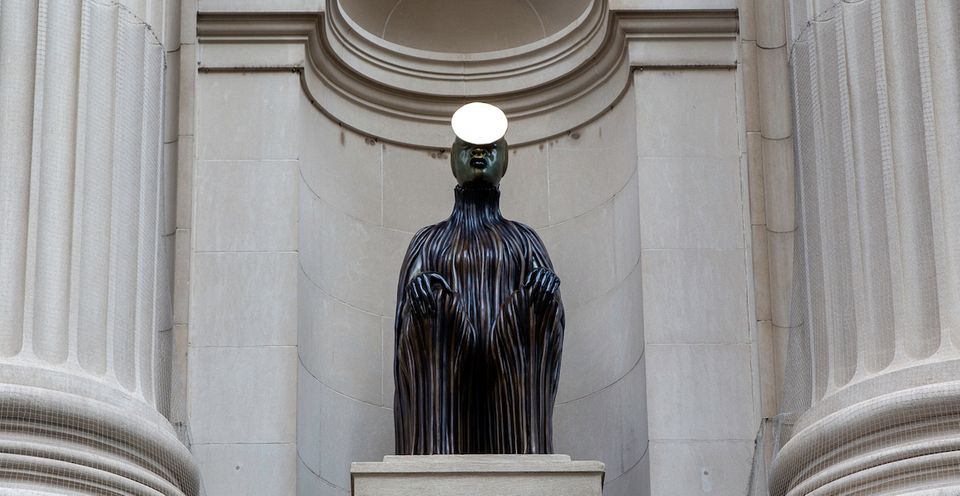 The Metropolitan Museum of Art has inaugurated its annual façade commission with works by the Brooklyn-based Kenyan artist Wangechi Mutu, called The NewOnes, Will Free Us (until 12 January 2020). The empowered work—comprising a quartet of bronze sculptures of African women that are individually called The Seated I, II, III and IV (2019)—is inspired by caryatids, a motif of European and African architecture in which a sculpted female serves as structural support. “The poised, stately figures I have created derive inspiration from my interest in ancient and modern practices that reflect on the relationship between women and power across various traditions,” the artist says in a statement. “They have come to look and bear witness, and to reflect back to us what we are.” The façade commission, in which an artist will bedeck the entrance of the museum each fall, is a revolutionary step in the the Met’s road to embrace contemporaneity. The project aims to “enable works by living artists to be in dialogue with art from multiple millennia, cultures and disciplines”, says the museum's director Max Hollein.

Three colossal, dreamlike “horses” are now guarding the 5th Avenue entrance of Central Park in the Doris C. Freedman Plaza, near the site where horse-drawn carriages queue to whisk tourists through the park. The Horses (until 30 August 2020) by the French artist Jean-Marie Appriou, best known for his oneiric subjects and experimental casting techniques, is the latest commission by the Public Art Fund and comprises 15 ft-tall cast aluminum sculptures that retain the artist’s fingerprints and tool marks and imaginatively reference his upbringing in Brittany and its sweeping folkloric history. Appriou’s “unconventional approach to sculpture is almost alchemical, [and] informed by a deep knowledge of the historical lineage of sculptors that have preceded him”, says the non-profit organisation’s curator, Daniel Palmer. “At the same time, his equine sculptures are otherworldly, evoking the silent majesty of horses with nuanced sculptural details that flicker between narrative and poetry.”

When you visit Phenomenal Nature: Mrinalini Mukherjee (until 29 September) at the Met Breuer, you will wonder why this is the first time the sculptor, who died in 2015 and was part of a generation of post-Independence Indian artists, has been given a major US career survey. You will also be astounded to know that Mukherjee, who initially trained as a painter, never did preparatory drawings for her sculptures. She made her fibre works with a labour-intensive knotting process, adding ceramic to her practice in the mid-1990s and then bronze. She was told that the lost-wax casting process would not allow for the details she wanted, says the show’s curator, Shanay Jhaveri, so she finished them with orthodontic tools. Mukerhjee's sensual works in organic forms that vary in abstraction and figuration, seem to play with positive and negative space and have a sexual charge with their phallic shapes and vulvar openings. They sometimes reference classical Indian sculpture, like the Night Bloom series in ceramic (1999-2000), which resemble seated women or goddesses, while many of the fibre works have blooming, symmetrical yonic forms. The large gallery has been divided by curves of drapery, with soft cream-coloured carpeting quieting the stone floors, giving a reverential hush to the show.