From centuries of printmaking to video art pioneers 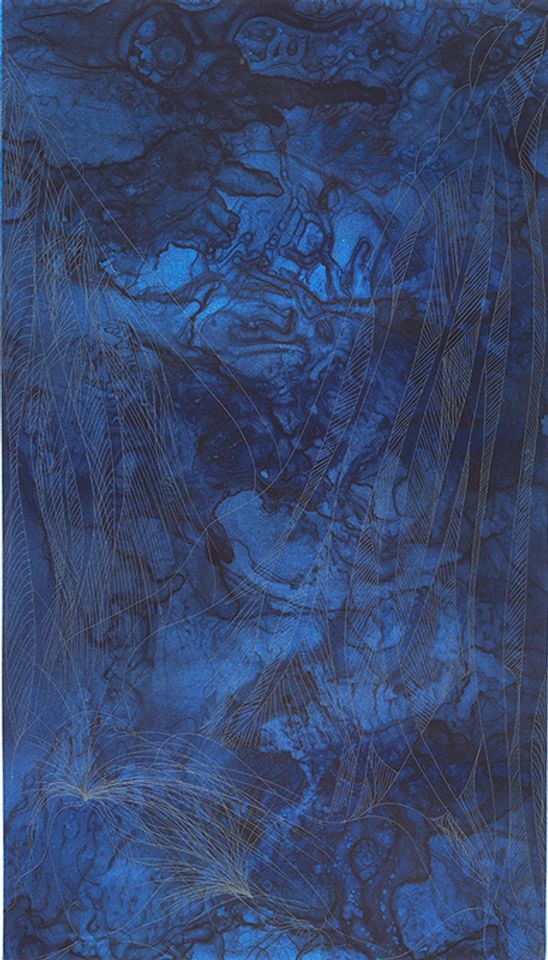 You might want to get some beta carotene in your diet before you visit the exhibition Edge of Visibility (until 19 December) at the International Print Center New York (IPCNY). It has around 50 works that are intentionally difficult to see (and often use challenging techniques as well), like the phosphorescent works of Philippe Parreno, or the exquisite micrography in works spanning centuries, from Johann Michael Püchler, who was active in the 17th century, to the contemporary artist Fiona Banner. In Chris Ofili’s gorgeous Black Shunga print series (2008-15), the delicate lines make the erotic content almost disappear against the swirling blue background. The show not only explores the “how”, but also the “why”: for instance, works that are difficult to see—especially with low contrast—can be used to express racial invisibility, like Kerry Marshall’s black figures on a black background. “Viewing is at the heart of this exercise," says Susan Tallman, the editor-in-chief of Art in Print, who organised the exhibition, in a statement, "what it means to see, physically, metaphysically, socially and politically”.

Why is there a show on video art at SculptureCenter? Before Projection: Video Sculpture 1974-95 (until 17 December), looks at work in that media made before the invention of flat-screen televisions and our current era of large-scale, cinema-style projection work—in other words, when video art, requiring clunky cube monitors, was not two-dimensional, and often sparked artists to create sculptural environments. Sometimes artists went outside of the television box in playful ways, like Video Ping-Pong (1974), in which Ernst Caramelle has placed two monitors showing the back-and-forth game with a ping-pong table in between. Pioneer Dara Birnbaum’s 1975 work Attack Piece is an engrossing comment on the medium itself, and gender: two monitors facing each other so you stand between, with one showing Birnbaum’s male artist friends like Dan Graham and Vito Acconci coming towards her aggressively with a super-8 camera, while the other has the relatively still Birnbaum holding a 35mm camera. Among the other artists are Nam June Paik, Shigeko Kubta and Diana Thater.

At Di Donna Galleries, The Life of Forms (until 14 December) makes sculpture come to life—at least in theory. Featuring work by diverse artists ranging from Ruth Asawa and Barbara Hepworth to Jean Arp and Isamu Noguchi, the exhibition looks at how these Modernist masters sought to translate the dynamic life forces of nature into static sculptural objects in various ways. The taught, sinewy lines of Alexander Calder’s kinetic sculptures pose an interesting counterpart to the amoebic blobs of someone like Henry Moore, but it is the visceral corporeality of works like Louise Bourgeois’s fragmented body party that really make one feel alive. The presentation itself also adds some drama and life: the works sit on organic, amoeba-like beds of white pebbles that snake through the gallery, and the focussed lighting casts long shadows on the dark grey walls.